Zeus III is the latest chapter of the WMS's popular Zeus trilogy. This slot is anything but ordinary, with its pyramid styled reels and 192 ways to win. Zeus III also features enough bonuses to draw you in, which includes expanding wilds, free spins rounds and up to 50x multipliers. If you want to try a slot that looks different and appealing, this is the game for you!

To learn more about the game mechanics and bonus features, stay with us until the end of this Zeus III slot review, as we will uncover everything you'll need to know before spinning the reels. 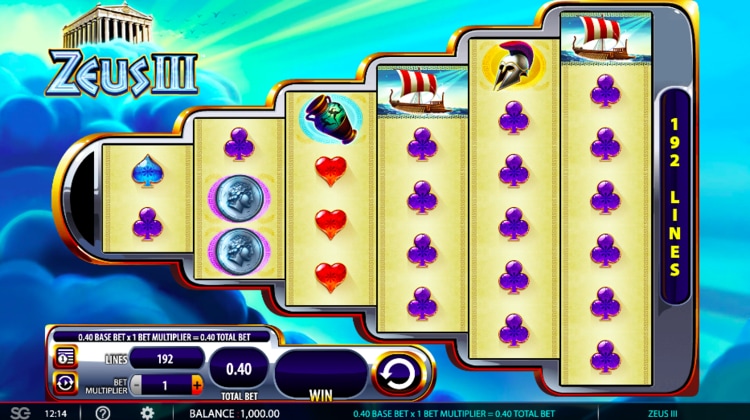 In case you just want to play an ordinary 5x3 slot, this game isn't for you! Zeus III is staged on a highly unusual set of side pyramid style reels. They have from 2 to 7 symbol slots on them, which makes this game a fascinating sight. There are 192 paylines, but note that you can't change that, meaning that you'll always have to bet all of them.

You can stake anywhere between £0.40 and £80 per spin, which is a very good bet range. It should be more than enough to please any kind of player, so we recommend this slot to both players who like to bet big and ones who prefer to take it slow. There is also an autoplay option, but it's very basic, same as with many other WMS slots. You can set only the number of auto spins of up to 200 and nothing more.

Zeus slot has a solid RTP of 96.1%. That is just slightly above the industry standard of 96%. Because of that, this game is considered as a good choice even if you want to play for a longer time.

But if you're serious about committing to a single slot, we would advise you to check out some of the games with higher volatility. For example, NetEnt's Blood Suckers that have an RTP of 98% or the Thunderkicks's 1429 Uncharted Seas with RTP of 98.6%. However, casual players shouldn't bother too much with this, since RTP makes a difference only over a huge number of spins.

Also, note that Zeus III is a highly volatile slot. It means that you probably won't score that many winning paylines. But once you get lucky, the potential payout could be massive.

Spin on the Top of the Olympus

The background of Zeus III looks like cloudy heaven, with only a shiny Greek temple rising above the clouds in the upper left corner. This gives us an impression that the surroundings are probably the tops of divine mountain Olympus where Zeus and other goods live. The background seems very fitting for this game, but apart from the clouds and the temple, nothing else is really happening on the screen. There are almost no moving parts, besides the animated wild symbols. Moreover, the whole design feels kind of dated.

The game was released back in 2014, but even with that considered, the artworks still seem like they could have been done better. There aren't many details, and the graphics look a bit pixelated. It somehow resembles an old SEGA game.

However, this doesn't mean that it's all bad. Zeus III is well composed and has a unique atmosphere. The game feels very smooth, and the whole interface is nicely organised. When it comes to usability, we don't have a single bad thing to say. We just believe that graphics quality in Zeus III isn't a match for the nowadays top slot games.

On the other hand, the music in the Zeus III slot is amazing. It sounds chilling and mysterious, like the mighty Zeus himself is about to pop up every minute. It all adds up to the overall atmosphere, making this slot a premier playing experience. Zeus III is maybe less visually appealing than some other popular mythology slots, like Hall of Gods or Gods of Olympus, but because of it's specific reels design and great overall vibe, we don't believe it's any less fun or engaging.

All the high-paying symbols are inspired by the ancient Greek culture and mythology, so you'll find things like helmets, ships, coins, winged horse and Zeus himself all spinning on the reels. Lower symbols are 4 card signs but designed to look more like gemstones. All the game symbols are well made. Nothing too spectacular, but good enough to keep most of the players satisfied.

The game has two special symbols, Wild and Feature sign. Wild can substitute for any other symbol apart from the Feature, while the Feature does what is in most other slots reserved for scatter symbol, and that is triggering the bonus round.

Zeus III slot comes with a single bonus round that includes both free spins and multipliers. Apart from this bonus, there is also a feature where a full reel of Zeus symbols transforms into a Wild Reel.

To trigger the main bonus game, you'll have to land at least 3 Feature signs, which look like Zeus's hand holding a bolt of lightning. More Feature signs you get, the more free spins and multipliers you receive. This is how it goes:

This is a very simple bonus round, so even total beginners won't have any problems to understand it. Keep in mind that Zeus III is a highly volatile game, meaning that you probably won't score this bonus too often. But once you do, those 10x and 50x multipliers can really do wonders.

Zeus III is an overall excellent slot game. We would like it even more if the graphics were a bit crispier. Also, we believe that the game designers could have added a couple of extra bonus features, just to spice things up. But what WMS gave us with this game is still pretty awesome. The pyramid reels design looks great, whole gameplay is smooth, and the atmosphere has an excellent vibe.

💰Is there a multiplier in Zeus III slot?
Yes, there are two possible multipliers in Zeus III, and they are waiting for you in the bonus round. If you land 3 Feature symbols, you'll get 25 free spins plus 10x multiplier, while for 5 Features there will be 50 free spins and 50x multiplier.
📈What it the Zeus III volatility?
Zeus III is a highly volatile game. It means that you probably won't get that many winning paylines, but once you hit the winning curve, the payout can be great. So if you don't mind to wait a bit and endure a couple of empty spins, this is the game for you.
⚡Is there a Wild symbol in the Zeus III slot?
Yes, Zeus III slot features a wild symbol, which is a mighty Zeus himself. Wild can substitute for any other symbol, apart from the Feature sign, to form a winning payline. Also, if you get a reel full of Zeus symbols, it will transform into Wild Reel.