Howl at the Moon with the Wolf Gold Slot

The wilderness and its denizens have been a popular theme of slots games for a long time. Wolf Gold from Pragmatic Play is a slot that takes you into the wilds of North America to adventure among mountain lions, wolves and eagles amidst dramatic mountain landscapes. It sounds exciting, but does the Wolf Gold slot deliver entertainment and prize-winning potential?

Well, this Wolf Gold slot review will answer that question for you here. Read on to find out all you need to know about this engaging wildlife slot from one of the world’s top software developers. 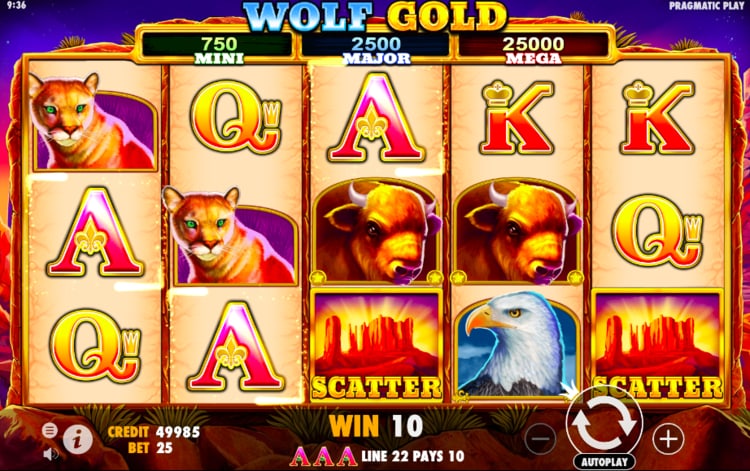 The Key Features of the Wolf Gold Online Slot

The Wolf Gold slot game is played on a grid of 5 reels and 3 rows. There are 25 paylines in operation. The game’s minimum bet is 0.25 coins and its maximum is 125 coins. The game works just as well on mobile devices as it does on your desktop computer, thanks to HTML5 technology. The game was released in April 2017, and is available in 20 languages other than English, including French, German and Japanese.

What is the Wolf Gold slot RTP? The answer is a pretty reasonable 96.01%, which is slightly on the low side of average for a game of this type. Pragmatic’s Buffalo King, another wildlife-themed game, has an RTP of 96.06%. Other Pragmatic Play slots tend to hover around the 96.5% mark. Of course, basing your slots strategy on RTP can be a little flawed, so don’t use this figure to determine how you play the game.

The game has medium volatility, meaning that you should be able to pick up both large wins and small wins on a pretty regular basis. We triggered the feature relatively regularly when we played the game, and the small wins kept coming to keep our bank balance steady.

Hear the Call of the Wild in the Wolf Gold Slot

Playtech’s games tend to feature graphics that look smooth and competent, rather than outstandingly detailed. The Wolf Gold online slot fits this pattern. The game’s reels are set on a rocky frame in front of a desert mountain scene that could come from an American state like Arizona or New Mexico. The colours are burnt orange and purple, and the game looks good without ever being really immersive. It certainly looks better than other wildlife slots, though, such as Wolf’s Den from Playlabs, or Wild Wolf from IGT.

The music is not the greatest we have ever heard in a slot, and you’re sure to be reaching for the mute button after a while. There are some nice touches when it comes to sound effects, with the cries of various animals being heard as you spin the reels. Again, though, the sounds can become pretty grating after a while. This is not a slot where you need earphones, it’s fair to say.

On the reels themselves, the symbols look pretty sharp, but do not have the detail that you will find in games from Play’n GO, for example, such as Gunslinger Reloaded. The lower value symbols are the usual letters associated with playing cards. The higher value symbols are animals. You’ll see bison, a mustang, a wolf, a mountain lion and a bald eagle on the reels as you play. The images are cartoon style, and they certainly do the job without looking wonderfully striking.

The wolf of the game’s title is the wild symbol, and it replaces all other symbols to form winning combinations for you. It also howls when you spin in a win that features it, which is a nice little touch of detail from the developers.

The scatter symbol is a mountain landscape, so it is pretty easy to spot. It can land only on reels 1, 3 and 5, though. It plays a vital role in the game’s bonus features, which we’ll look at in detail later on in this Wolf Gold slot review. There is also a full moon symbol which triggers another of the game’s features. Read on to find out more about this.

Watch out for the Moon in Wolf Gold

There are 2 bonus features on offer to you in the Wolf Gold slot game. You need to watch out for the scatter and moon symbols to trigger the features. Check out more details here.

In addition to these two features, you can also win one of the 3 possible jackpot prizes on offer. These are triggered by spinning in moon symbols that feature special jackpot emblems. There are mini, major and mega jackpots to be won. These prizes are worth 30x, 100x or 1000x your stake, so they are certainly lucrative.

If you’re playing the Wolf Gold slot online then the features are worth looking out for. They certainly provide some decent entertainment, as well as plenty of chances to take home some big prizes. The respins bonus seems a little lacklustre at first, but it can soon catch fire with a bit of luck.

Stacked Symbols and Respins Make Wolf Gold Worth a Look

In the view of this Wolf Gold slot review, this game is among the better wildlife-themed titles that we have seen. While the cartoon graphics are not as detailed and sharp as in other games, they certainly look slick and sophisticated enough here. The bonus features are reasonably generous, and the presence of stacked symbols really boosts your chances of winning during the free spins.

If you’re playing the Wolf Gold slot online then you won’t be blown away by the game, but you will find it is quietly impressive if you’re prepared to spend a bit of time on it.

🎰Where can I find a Wolf Gold online casino?
There are plenty of online casinos where you can find Wolf Gold and plenty of other Pragmatic Play games. Your best bet to find a good one is to use this website. We have an up-to-date list of online casinos where you can play Pragmatic games. You can also use the list to discover which casinos offer the best welcome bonuses. New ones are opening all the time, so make sure you check back regularly.
🎰What is the most valuable standard symbol in the Wolf Gold online slot?
When you’re playing Wolf Gold you need to watch out for the wildlife. The animals on the reels are the game’s higher value symbols. The highest paying animal is, to give it its correct name, is the North American bison. Most people would recognise this more readily as a buffalo, though! If 5 bison spin in on a payline you’ll win 20x your stake. But you’ll also pick up 10x your stake for 4 of them.
🎰Are there any other wildlife-themed slots from Pragmatic Play?
If you enjoyed Wolf Gold and fancy another of Pragmatic’s wildlife games, you might want to have a look at Safari King. It offers a very similar gaming experience, only with the action set on the African savannah. There is also Mustang Gold, which is also set in the wilds of the American West, like the Wolf Gold online slot.