The Diaz family are favourites of ELK Studios. If you have played their Taco Brothers slot you will know all about Captain Diaz and his plans to steal the joy of tacos from the Mexican village of Santa Maria. In the Wild Toro slot, you get to meet his son, Diaz Junior. The Captain’s son has decided to be a bit of a lowdown villain like old dad and has become a matador.

We’ll give you all the details you need to know about Diaz junior and his tangles with the heroic bull El Toro in this Wild Toro slot review. Read on to find out about just what thrills this fun slot offers! 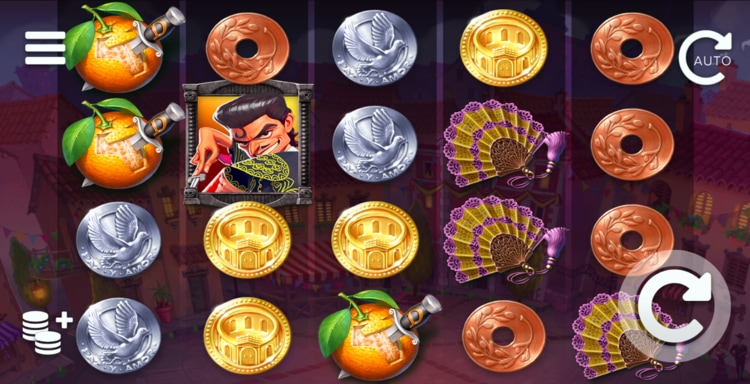 So what can you expect when you open up the Wild Toro slot? The game is played on a grid of 5 reels and 4 rows, and there are 178 paylines. The minimum bet is 1 currency unit and the maximum bet is 100. This medium variance slot has an RTP rate of 96.40%, which places it in the typical range of ELK games. As a medium variance slot, it should appeal to experienced gamers as much as it does to newcomers to online slots gaming.

The slot was released in November 2016, so it can be considered a sequel of sorts to Taco Brothers which came out in 2015. The game has an autoplay option, so if you like you can sit back and enjoy the great graphics and immersive sound. We’ll have a closer look at the images and sounds in the game in the next section of this Wild Toro game review.

No standard payline structure: wins are formed by matching symbols in adjacent rows running from left to right

What Does the Wild Toro Slot Game Look and Sound Like?

If you have previously played other ELK Studio games then Wild Toro will have a familiar look to it for you. ELK like to use big, bold graphics in their games and this is no exception. Like Taco Brothers, this game has cartoon-style graphics and charismatic, recognisable characters. Colours are fresh and fizz off the screen during gameplay. The symbols on the reels are very detailed, and everything moves slickly and smoothly while they are spinning.

The game really excels when it comes to sound, though. There is a quirky musical soundtrack to enjoy when the game opens, and this is funky and Latin-influenced. It dies away as you begin to play, though, and the ambient sounds of a Spanish village take its place. You can hear women chatting away in Spanish, and other street noises, while the music tails off and then builds up again. The sound design in the game is excellent. The word immersive can be overused in slot reviews, but this is a game that really immerses you in its world, mainly thanks to its sound.

The graphics really come alive during the game’s bonus features. The way that the Matador and Toro characters are depicted during the features is very entertaining, and their facial expressions will delight you with their detail. Someone really gave a lot of time and attention to making these two characters as appealing as possible, and we applaud them for it. It really adds a nice touch of charisma to this slot.

The symbols on the reels are very detailed too, and all relate to the Latin theme in some way. As with other ELK titles, the actual range of symbols used is pretty small. There are just 6 standard symbols used on the reels in total. These are orange with a knife in it, a fan, a red rose and gold, silver and bronze coins. The wild symbol is the game’s logo and there are also Toro and Matador bonus icons to watch out for. We will explain just why these are significant in the Wild Toro slot machine in the following section.

Bonus Features are a Battle between Bull and Matador

This game has not 1 but 2 bonus features on offer to players. As we mentioned above, there are are two bonus symbols to watch for. These apply to each of the two main characters in the game – the Matador (Diaz) and El Toro. Each has its own bonus to offer to you.

While this game does not have the most intense or challenging features that we have seen, there is plenty to keep you entertained in these two bonuses. What is particularly entertaining is the way that the screen really comes to life and fills with action during the bonus rounds. If you’re looking for a game with more challenging bonus features then Playson’s Claws vs Paws is worth a look.

If you like games that feature detailed graphics, great sound and entertaining bonus features then you are sure to love this game. In the view of this Wild Toro slot review, it really is a very good slot indeed. We are particularly impressed with the sound effects, which really help to put you squarely in the village scene of the slot. We loved the way that you could hear the women of the village chatting as we played.

The characters in the game have some real charisma, and there is a nice link to other ELK Studios games too, in the shape of Diaz. While the subject matter of the game is perhaps a little edgy, given the way that bullfighting is generally perceived these days, it is nice to see the matador made the villain of the piece. The game is also so charmingly designed that it would be hard for anyone to find fault with it on these terms.

So make sure you check out the Wild Toro slot if you see it at your favourite online casino. Its bold graphics, excellent sound design and all-round charm are sure to have you coming back to it time and again!

🎰Where can I play the Wild Toro slot?
If you’re looking for an online casino where you can play the Wild Toro slot machine then your best bet is to check out our list of casinos here at this website. You’ll be able to find all of the casinos that feature slots from ELK Studios and be able to spot any new ones that are springing up as soon as they appear. You can also find which ones are offering the most lucrative welcome bonuses. Bwin and Leo Vegas both feature ELK slots, for example.
🎰Can I play Wild Toro on my phone?
If you’re the type of gamer who likes to play slots on their mobile then you’ll be delighted to know that Wild Toro looks just as good on your phone as it does on your PC screen. ELK uses HTML5 technology in all of their games. This means that they can be played on a wide variety of devices of differing sizes. So if you’re a fan of mobile gaming, make sure you check out Wild Toro.
🎰Is it safe to play Wild Toro?
Many gamers worry about safety on the internet. There is no need for any concern when it comes to playing Wild Toro. ELK hold licences from bodies like the UK Gambling Commission and the Malta Gaming Authority. To hold these licences, ELK needs to stick to very rigorous guidelines concerning the safety and fairness of their games. You can, therefore, rest assured that it is safe to play Wild Toro and other ELK slots like Taco Brothers and Ice Wolf.