The Battle of Thermopylae took place in 480BC. Fought between a small force of Spartans and an overwhelming number of invading Persians, it has become a byword for extreme courage against the odds. Quite how the warriors who fought that day would feel about being used in a slot, we’ll never know, but Red Tiger has paid its own kind of tribute to them with its Wild Spartans slot.

We’ll tell you all about this game in this Wild Spartans slot review. Read on to see how the titans can help you achieve victory against the odds! 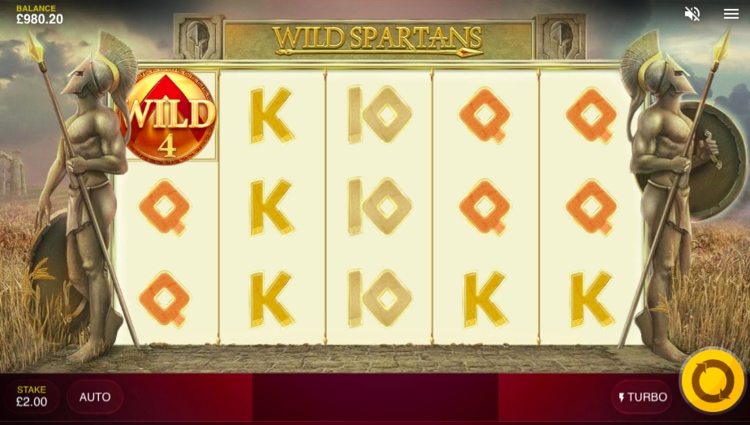 The Wild Spartans slot is played on a grid with 5 reels and 3 rows. There are 10 paylines in operation during play. For UK players, the minimum bet is 20p and the maximum is £100. The game was released in April 2016 and is fully compatible with mobile devices. You can play the game in 30 languages in addition to English, including German, Chinese and Italian.

Red Tiger gives the maximum possible win as 4336x your bet, which is pretty lucrative. There is an autoplay feature if you want to take a more passive approach to playing the game. You can also find a turbo play button in the bottom right of the game’s screen if time is limited and you want to speed up the action.

The RTP of this game is given as 96.43% by Red Tiger, though we also saw the figure given as 95.13% at one operator.  This is a typical figure for a slot of this type but is perhaps a little higher than other Red Tiger slots, many of which operate with RTPs between 95% and 96%. Their Puss N Boots slot, for example, has an RTP of 95.23%, and Ra’s Legend has an RTP of 95.02%. Other slots, like Thor’s Lightning and Mega Dragon, though, has RTPs of just over 96%.

If you prefer to base your slot strategy on stats other than RTP, you will want to know that the Wild Spartans slot is a highly volatile game. This makes things exciting, as you could be in for a big win at any time. Picking up plenty of frequent smaller wins may not happen, however. When we played the game we found that we saw plenty of locking wilds, but the bonus symbol to trigger the free spins feature was much rarer.

We were impressed with the way that this game looked. There is an understated and unpretentious feel to the game that works well with the theme of undaunted warriors. The colour scheme is dominated by a slightly bronze shade of yellow, reflecting both the colour of the sacred soil of Greece defended by the Spartans and their bronze armour.

The reels are set on a frame in front of the battlefield of Thermopylae. Two Spartan warriors stand guard at the side of the reels. These are the titans, and they also play a role in the game’s features. There is an impressive level of detail in the images that helps to create a really immersive atmosphere. This is helped by the dramatic music, which is impressive without being intrusive.

The Titans Offer a Treat

The reels have a minimalist feel to them, with them appearing to be made of some kind of paper. The lower value symbols are the usual range of numbers and letters, and these are inscribed in simple style on the reels. The higher value symbols are all items associated with Spartan warriors, so you will see a helmet, a spear and a sword. There is some pleasing detail on the symbols, though they are not especially impressive. The game looks good thanks to the detail of the titans standing at the side of the reels in the field of wheat – you can see the individual ears of wheat on the plant, such as the detail they possess.

The wild symbol is the word wild emblazoned across a shield. Sometimes when you see a wild symbol on the reels you are treated to a little animation. A titan will appear on the symbol and give a war cry and wave his spear. The wild will remain locked in place for longer than usual when a titan appears like this. This was an appealing little touch that we enjoyed a lot. We’ll look more closely at the locking wilds in the next section of this review. You should also lookout for the bonus symbol, which is a beautiful Greek woman.

There are two bonus features for you to enjoy in the Wild Spartans slot machine.

In many ways, the Wild Spartans slot is a typical Red Tiger game. It deploys locking wilds and free spins as its bonus features, and its overall visual design is classy, clean and uncluttered. The music and sound effects are tasteful and non-intrusive. This Wild Spartans slot review has to conclude on a positive note – we liked this game, despite the lack of any real depth to its bonus features. We recommend that you give it a try, though you may find the infrequency of the feature being triggered a little trying at times.

If you fancy trying some more slots that use the warriors of Sparta as their theme, then have a look at Fortunes of Sparta from Blueprint Gaming, or perhaps Sparta from Novomatic. Next Gen Gaming also produces a slot called 300 Shields.

🎰How do I find out what each symbol is worth in the Wild Spartans game?
If you want to discover how much each symbol can bring in terms of prizes, you can find a paytable in the game itself. There is a box with lines in it located in the top right corner of the screen. This is the information tab, and you can find a full pay table by clicking it. You’ll also find a full explanation of how the game’s paylines are structured, so it’s very useful. There are also some details about the game’s features.
🎰If the feature isn’t triggered often, how can I be sure the Wild Spartans slot game is fair?
It is tough to trigger the feature in this game, but that does not mean that it is in any way being unfair to you. Red Tiger hold licences from the UK Gambling Commission and the Malta Gaming Authority, meaning that their games are strictly audited for fairness and safety. You do not need to worry that you are being cheated when you play Wild Spartans. The game is legitimate and not a scam.
🎰Are there many casinos where I can play Wild Spartans and other Red Tiger slots?
Yes, there are plenty of online casinos that offer you the chance to play Red Tiger games like the Wild Spartans slot. The best way to find these casinos is to use our list of Red Tiger casinos here at this website. You can find the online casinos with the widest selection of games and the most lucrative bonus offers too. Make sure you come back often as new casinos are springing up all the time.