Quickspin has opted for a slightly unusual theme with their Volcano Riches slot. This game has the Pacific Ocean as its setting as it uses the culture and history of the Polynesian people as its theme. Tiki statues and dancing warriors populate the reels.

So did this game give us a volcanic eruption of thrills as we played it, having us dancing a Sipi Tau or a Haka? Read this Volcano Riches slot review to discover just how successful Quickspin have been with this intriguing and absorbing game. 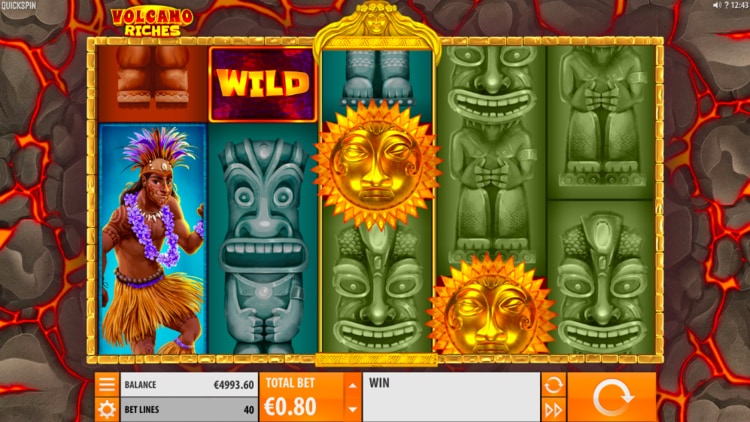 The Volcano Riches slot is played on a grid with 5 reels and 4 rows. There are 40 fixed paylines. There is a usual minimum bet level for UK players of 20p and a maximum of £100. The game can be played on mobile devices and still look and sound great thanks to it its use of HTML5 technology. It was released in March 2018 by Quickspin, so is a relatively new entrant on the market.

There is an autoplay button in the game if you like to use those to keep the action flowing while you watch. A turbo play button sits just beneath the autoplay button in the bottom right corner of the reels, if you feel like things are moving too slowly for you. The game also includes an achievements engine. This is used to record special events in the game, such as triggering bonus features and can gain you prizes. The maximum win that you can gain in this slot is worth 1254x your total stake.

The Volcano Riches game operates with an RTP percentage of 96.43%. The vast majority of Quickspin games have a very similar RTP, with most of their titles hovering between the 96% and the 97% mark, with a small number of games lying outside that range. Typical Quickspin slots are Bog Bot Cre, which has an RTP of 96.51%, and Durian Dynamite, a game that has an RTP of 96.22%.

If you like to base your slot strategy around statistics then, in addition to knowing the RTP, you’ll also be keen to learn that this game has high volatility. This means that you might need a little patience while you wait for the more lucrative wins, especially those generated by the game’s free spins feature, to appear, rather than relying on frequent small wins to keep your balance topped up.

Immerse Yourself in the World of Pele the Sun Goddess

The reels in the Volcano Riches slot are set in what appears to be a stone frame, with a golden sun goddess sitting at the top in the middle. The backdrop is a lava flow, which is in the process of cracking as it flows down the side of the mountain. This means that the backdrop’s colour scheme is a striking mixture of vivid orange and sooty grey.

Although not as detailed as the backdrops we have seen in some other games, this one certainly helps to create a pretty immersive atmosphere, especially when seen in conjunction with the detailed, cartoon-style graphics of the symbols that populate the reels.

When it comes to the sound used in the game, we were pretty impressed. Quickspin games tend to use unobtrusive music combined with some detailed ambient sound effects. This creates a nicely immersive atmosphere and is certainly true of the Volcano Riches slot. The tune that plays while you spin the reels has a Polynesian vibe to it, with the sound of bamboo percussion rattling appealingly away in the background.

The music does get a little bit livelier if you record a win, and there are some nice visual touches when this happens too. The game certainly does its best to place you in the world of the Polynesian volcano gods with its graphics and sound.

When it comes to symbols used on the reels, this game does not use the numbers and letters that many other slots do. Instead, all the symbols relate in some way to Polynesian culture. The four tiki statues are the game’s lower value symbols. The higher value symbols are the dancing warrior, the woman in a green hula skirt, and the fiery volcano goddess. All of the symbols on the reels, both high and low value, can appear stacked. This gives the game a slightly more dynamic and interesting feel than many more conventional slots.

The game’s wild symbol is easy to spot as it is the word ‘wild’ emblazoned in gold across a purple background. It will substitute for all other symbols apart from the golden sun scatter symbol. There is also a Volcano Wild symbol to watch for. These are important symbols for the games bonus features, and you should make sure that you keep a close eye out for them. We will discuss how this can help you win in the next section of this Volcano Riches slot review.

While there is one main bonus feature in this game – the free spins – there are also two other smaller features that can bring you some potentially very large prizes. We’ll look at all 3 of these features here.

This Volcano Riches slot review will conclude on a largely positive note. We enjoyed this game’s lush graphics, smooth gameplay and engaging bonus features. The Volcano Wilds, in particular, is a very pleasing touch that we enjoyed. We also liked how the symbols could all appear stacked, and the use of Tiki statues is a little more distinctive than just using numbers and letters. There was also plenty of potential for winning big prizes during the game’s bonus features.

If you’re looking for other Pacific-themed slots then you might want to check out Pacific Paradise from IGT, or alternatively Pacific Boom from Ocean Bet.

🎰How can I trigger the Volcano Wilds feature?
There is no way of deliberately triggering the Volcano Wilds. You need to be patient and wait until the necessary symbols spin onto the reels in their own time. Of course, when the wilds do appear they will explode and boost your chances of big wins hugely. Remember that only 2 Volcano Wild symbol can appear on the reels during the base game, and only 2 during the free spins feature.
💰What is the maximum win that I can achieve on the Volcano Riches slot?
When it comes to taking home really big prizes, the Volcano Riches game can give you some huge wins. The best place to find out what each symbol is actually worth is the game’s pay table. You find this by clicking on the box with horizontal lines in it at the bottom right of the screen. You should then click the I tab that appears among other options. But the top prize that you can win is worth a massive 1254x your total stake.
🤔Where can I find a casino at which I can play the Volcano Riches slot and other Quickspin games?
The best place to find a casino where you can play Volcano Riches and other slots from Quickspin is to check our list here. We carry an up-to-date list of Quickspin casinos on this website. You can use it to find all the best sites that carry games from this developer. New casinos appear on a continual basis, so make sure that you check back here as often as possible. You can also find out where the most tempting welcome bonuses can be found.