When it comes to Viking-themed slots, no one does it better than Yggdrasil gaming. The software publisher knows how to tap into its Scandinavian heritage and produce hit games, like Vikings Go Wild and Vikings Go Berzerk. Grab your life jacket and your horned helmet because Vikings Go Wild is taking us on a sea-faring adventure.

However, is Vikings Go Wild a gift from Asgard, or is it more like the mundane Midgard? Our Vikings Go Wild slot review examines this online slot game from every angle, so you don’t have to. 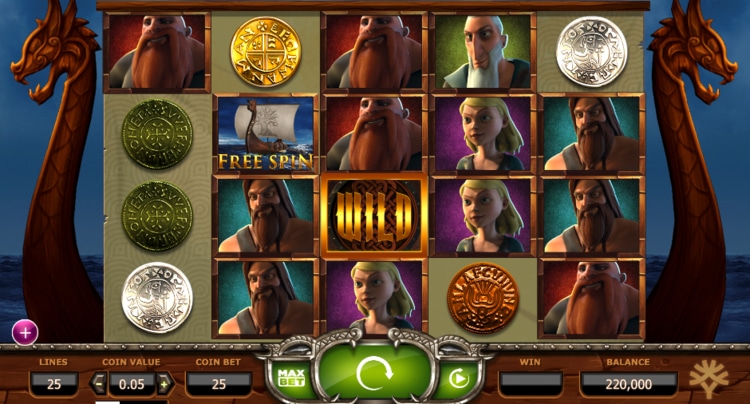 Yggdrasil’s Vikings Go Wild slot is played across 5 reels and 4 rows. It features 25 paylines, which helps make it a little more volatile, something that many players enjoy. The game is fully mobile compatible, having been programmed in HTML5, meaning you can play it on the go on your smartphone or tablet and not run into any issues.

Players can wager between £0.25 to £50 on a single spin, meaning that players of all types, from the most casual to the most dedicated, are likely to find a wager that they’re happy with.

In terms of potential wins, the base game can earn you up to 250x line bet, which is 10 times your stake. This is lower than we’d like, if we’re being honest, though luckily the bonus features make up for that and opportunities for bigger and better wins are opened up, but more on that later.

Released in 2015, Vikings Go Wild is just about starting to look a tiny bit dated, but this is still an online slot that has a lot going for it in terms of both audio and visuals. The reels are flanked by wooden, typically Norse, sea-serpent mastheads, with a rolling ocean backdrop peeking out from behind the reels.

The control panel is set on aged wood with carved iron details, further enhancing the “Viking Ship” motif, and the symbols are all well detailed. The Viking symbols are rendered in 3D, and while they look good, it’s clear that this game was released before Yggdrasil’s Vikings Go Berzerk, which has much more detailed character models.

What makes this game feel fluid and snappy is that players can control how fast the reels spin, meaning every player can find their own “sweet spot” and set their own pace. We didn’t adjust the slider, though, as we found that the default setting was pretty close to perfect, and we think many players will agree.

The soundtrack sounds like it was ripped straight out of a modern, adventure video game, and is genuinely pleasing to the ear. The typical “slot sounds” like spinning reels and wins are all there, but they’re of a high enough quality that they don’t sound cheap or take away from the soundtrack at all. While we tend to mute most slots during testing after the first hour or so, we were content to let the background music play on.

Yggdrasil kept things relatively simple with the symbols in Vikings Go Wild, which is to the game’s benefits. Each symbol is completely unique and can’t be mixed up with any other, and they all fit perfectly within the Viking theme.

The low paying symbols are all highly-detailed coins that look like they were taken straight out of a Viking settlement. There are four different coins, each with their own unique values, starting with the green coin at the lowest end, then going up to the bronze coin, the silver coin, and finally the gold coin.

The high-paying symbols are made up of unique, 3D Viking characters. There’s actually a surprising amount of detail in the character models, but the easiest way to distinguish between them is by the colour of their backgrounds. The lowest value of these symbols is the Purple Viking, then we have the Green Viking, the Red Viking, and finally, the Blue Viking, which is the highest value symbol in the game.

The Free Spins symbol can appear on any of the reels, and at least three of them showing up at once will activate the Free Spins Mode bonus feature. This symbol doesn’t have any value of its own, so when fewer than three show up, nothing happens at all.

Finally, we have the Treasure chest symbol. This can only appear on the 5th reel, and it shows up randomly. This is more of a bonus feature in and of itself, so we’ll get into more detail about that below.

Vikings Go Wild keeps things pretty simple when it comes to bonus features, and we think this is actually one of the slot’s strengths. Players don’t need to learn complicated systems or keep up with 12 different bonus modes, it’s easy to pick up and hard to forget.

The main bonus feature is the Free Spins Mode, though the Treasure Chest symbol is a bonus feature in its own right too. While these are both relatively simple, they each have just enough complexity to keep things interesting for players.

During the Free Spins Mode the Viking symbols become even more essential than they were before. Each Viking has the chance to turn into a sticky Wild symbol. Tentacles rise from the deep to try and snare the Vikings, and if they can fight them off, they become sticky Wilds.

This round doesn’t feature regular Wild symbols or Free Spins symbols, but any Wilds that appear as a result of the Viking transformation are sticky, meaning that they’ll remain for the entire duration of the Free Spins Mode. This makes it easier to rack up larger wins, as you can end up with entire paylines consisting entirely of sticky wilds and recording wins with each spin.

While there aren’t any Free Spins symbols in this mode, there is actually a way to earn more free spins, and that’s by opening up Treasure Chests. A treasure chest can contain between 2 and 4 additional free spins to add on to your starting amount of spins, as well as the option to turn an entire reel into Wilds.

Even with the lowest starting amount of 8 free spins, we regularly found ourselves earning 25 to 75x our stake in the Free Spins round, with there still being plenty of opportunities to earn even higher amounts.

The Treasure Chest is pretty unique in that it’s its own bonus feature as well as having the ability to activate the Free Spins Mode bonus feature. The Treasure Chest symbol can only appear in the 5th reel and treats players to a horizontal reel of bonuses and free spins. It can appear in both the base game and the Free Spins Mode, making it highly flexible, and extremely useful.

What the chest contains, though, is slightly different in Free Spins Mode than in the base game, so players should definitely keep that in mind when excitedly clicking to open up a Treasure Chest:

In our time with Vikings Go Wild, it was actually the Treasure Chest that activated the Free Spins Mode most often, as well as providing some much needed larger wins during the base game.

We also found it to be the perfect addition to the Free Spins Mode, as we mentioned above, as all the options inside the Treasure Chest helped us rack up even bigger wins during the bonus feature.

Yggdrasil’s Vikings Go Wild has been featured on “Top Slots” lists around the web for years now, and it’s clear to see why. The perfect balance of simplicity and well-designed mechanics make this game an absolute treat to play and definitely deserves a spot in online slot Valhalla. The only fitting way to end this Vikings Go Wild slot review is to say one thing: you should definitely experience this game for yourself!