4.0
/5
Energy Casino
Deposit Bonus
Deposit £10, get 50 No-Wager Spins
CLAIM
18+. Open to UK residents who have registered through the relevant affiliate link after 04.01.2020. T&Cs apply. Get 50 EnergySpins (ES) on Book of Dead™️ (£0.10, valid 7 days) with your first deposit. Offer not available for any deposits thereafter. Available once per customer. Opt-in by choosing the Welcome Offer tab before making your deposit, otherwise select "NO BONUS". Winnings from ES carry no wagering requirement. Max winnings are capped at: £100. Irregular gameplay may affect eligibility. BeGambleAware.org. Play responsibly. #ad
Details
Deposit Bonus

Viking warriors are ascending from the north, and they are bringing several fantastic bonus rounds and jackpots with them. Apart from the sharp graphics, the Viking Glory slot comes with 3 free spins rounds and 4 Power Pay bonuses that can bring you multipliers, respins, wild reels and highly rewarding pick-a-prize rounds. If that isn't enough to make you interested, note that Pariplay also included 5 jackpots that can bring you up to 100x your initial stake. We will explain all of these features in our Viking Glory slot review, so don't miss to give it a look. 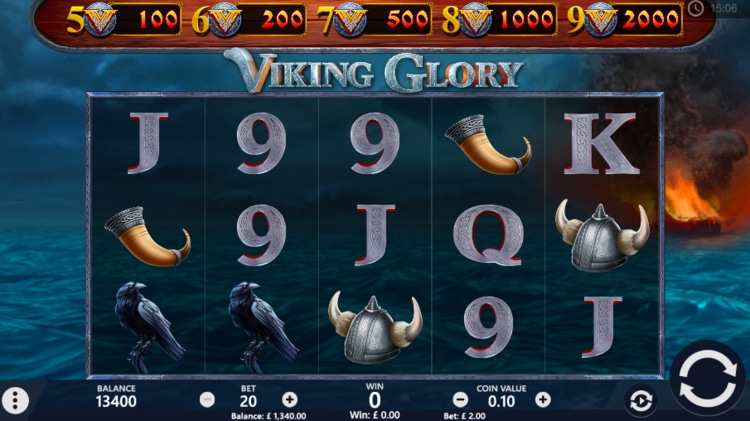 With 5 reels in 3 rows, Viking Glory looks very average. It features 30 ways to win that pay only from left to right, and there isn't an option to lower that number by yourself. You can start spinning for as little as £0.20, while the max stake is £40. That is lower than we have seen at many other slots, so in case you're a highroller player, you may want to search for a game with more flexible stake limits.

Pariplay engineers made sure that the Viking Glory runs equally great on both mobile and desktop devices, as well as all major operating systems. They have also included an advanced autoplay feature, in case you want to give a game a little boost. The maximum number of auto spins in 100, but note that there is also an option to make it stop when:

If a low RTP is a deal-breaker for you, the Viking Glory may come as a bit of a disappointment. It has an RTP of 95.97%, which is slightly below the market standard. This isn't that bad, but in case you prefer more favourable slots, we recommend you to take a look at Kings of Chicago by NetEnt or Jokerizer by Yggdrasil.

With a hit rate of 34.84%, the Viking Glory slot is considered as a medium variance game. It means that you can expect to get a winning payline in about one-third of your spins, while still having solid chances to score a big payout during some of the bonus rounds.

Viking Glory comes with incredibly realistic graphics and speedy gameplay. The background is the most mesmerising part of the game. You'll see fantastic animations of wild sea and a burning Viking warship behind the reels, which perfectly mashes up with the intense atmosphere of the game. All the artwork is very detailed and well-drawn, so it's safe to say that this is one of the best-looking Viking games we have seen in a while.

The audio background is just a generic upbeat tune, which makes this game even more tense. You'll also hear waves, as well as lots of sword fight noises and war cries, so basically everything you would expect on a Viking ship. Because of its dark graphics and realistic animations, this game reminded us of the Vikings slot by NetEnt. But if you want to try some of the less intense Viking-themed games, than cartoonish looking Vikings Unleashed Megaways will be a great choice.

All of the symbols from the top of the paytable are classic Viking items, such as a Horn, a Helmet or a Black Raven. The rest of the symbols are card signs and numbers with Viking-styled decorations on them. The Wild symbol is a Viking with an axe, while the Scatter is a big V on a shield. There is also the Warship Free Spins symbol and the Dragon Figurehead Power Pay symbol. All of them have special abilities or trigger some of the bonus rounds, which we will talk more about in the next chapter.

Viking Glory Is Packed With Bonuses

There are several exciting bonus features it this game, including free spins, respins, multipliers and 5 jackpots. Also keep your eyes on the Viking Wild symbol, as it can replace all other symbols, apart from the Scatter, Power Pay and Free Spin symbols, to form a winning payline.

Landing 3 Warship Free Spins symbols anywhere on the reels starts the bonus round, which awards 5 free spins. Before the free spins begin, you'll get to choose one of these rounds:

Every time you get at last 1 Dragon Power Pay symbol, you'll be presented with a horizontal reel which will spin and award you 2 of these special features:

The Viking Glory slot comes with 5 instant jackpots. You'll need at least 5 Scatter symbols to get the smallest jackpot or up to 9 of them for the top prize. The Scatters are available in the base game, meaning that you can land a jackpot on any given spin.

There will be a prize even if you get less than 5 Scatter symbols.

Pariplay spared no expense when making the Viking Glory slot. This game is filled with excellent bonuses, including respins, added wilds and multipliers. The main round even lets you choose a bonus you like the most, so no matter if you prefer increasing multipliers, pick-a-prize rounds or wild wins, this slot got you covered. With up to 100x your stake, jackpots aren't that massive. Nevertheless, they are a nice addition to an already packed game. Viking Glory is an exceptional slot in every way, so we highly recommend you to give it a try.