Under the Waves Slot Review 2021

Under the Waves Slot by 1x2 Gaming

Dive into a jolly-looking ocean adventure with 1x2 Gaming's Under the Waves slot. This simple game features 5 reels with 20 paylines and a couple of straightforward bonus rounds. Matching enough special symbols will open the doors to a free spins round. Also, there is an option to get involved in a pick and click game for additional winnings. In case you want to learn more about bonus mechanics, as well the other things that can impact your gaming experience, such as RTP and volatility, check out our Under the Waves slot review below. 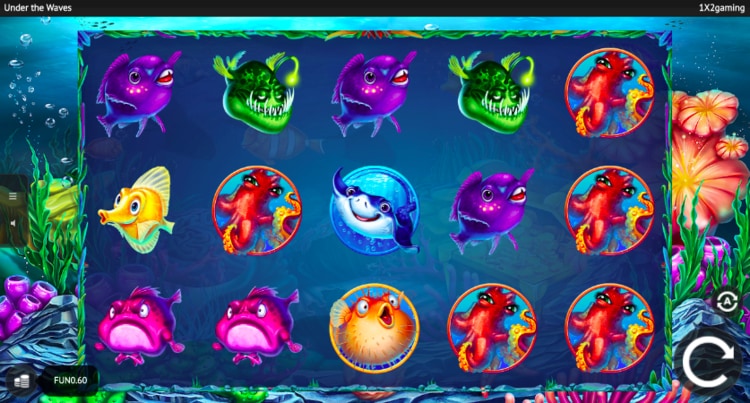 Under the waves is played on the usual 5x3 matrix, which is the most commonly used setup these days. It features 20 paylines, without an option to lower that number manually. Also keep in mind that this isn't one of the win both way slots, meaning winning lines are formed left to right only. If you prefer to wager on a smaller screen, you can play the Under the Waves slot on your smartphone or tablet. The game looks equally good on all devices and operating systems.

Bet range favours both high-rollers and players on the budget. With minimal bet or just £0.20 and max stake of £100 per spin, everybody should be able to find their sweet spot. Game designers also included an autoplay option, but note that it's very basic, so you can set only the number of automated spins of up to 99 and nothing more than that. In case you want to speed things up even more, turn on the quickspin feature in the game menu.

Under the Waves Slot RTP

When it comes to RTP, Under the Waves slot is right around the market average with 96%. That's very good for casual players, but if you want to commit to a single slot for an extended time, we advise you to check out some of the more favourable games, such as Thunderkick's 1429 Uncharted Seas which features RTP of 98.6%.

Under the Waves is a medium volatile slot. It means that it has a good balance between average prizes and the hit rate. In other words, there will be enough wins coming your way, while the game stays dynamic.

Under the Waves looks like an ocean-themed cartoon. Everything feels super jolly, with a lot of bright colours and smiling fishes. Graphics look decent. Not the best we have ever seen, but good enough to keep you interested. The background is an ocean floor, with lots of lively details, like corals, clamshells and even a treasure chest. However, there aren't any moving parts, apart from when you hit a winning payline. New releases tend to have lots of animations and small details, so Under the Waves feels a bit dated.

The music is slow and relaxing. It sounds like a theme song from some Disney animated movie, so it perfectly merges with the cartoonish design of this slot. There are also water sound effects in the background, and when you spin the reels, you'll hear bubbly noises instead of usual quirky slot effects. The audio background is definitely one of the upsides of Under the Waves slot.

In case you want to try some similar games, note that there is an array of ocean-themed slots to choose from. Some of the most popular underwater games are Playtech's Great Blue, Yggdrasil's Reef Run and Betsoft's Under the Sea.

The great thing about Under the Waves is that all of the symbols are specially designed for the game. Both higher and lower-paying symbols are different kinds of sea creatures, such as fishes, turtles and octopuses. There are no numbers or card signs, which is something you don't see so often these days.

The game feature 3 special symbols. Mermaid Wild substitutes for every symbol on the board apart from the other two special signs. Shipwreck Scatter and Chest Bonus symbols are there to activate bonus rounds.

Under the Waves Slot Bonus Games

This slot comes with a free spins game and a pick-a-prize bonus. These are both very simple bonus feature, so even complete beginners won't have a hard time figuring them out. Note that there are a few other 1x2 Gaming slots that use almost the same bonus mechanics, for example, their popular Vampire Hunters slot. So, a setup like this is something you'll see at least a couple of times more if you decide to keep playing games from 1X2 Gaming.

To activate the free spins round, you'll have to collect at least 3 Shipwreck Scatters anywhere on the reels. If you manage to get more of them, the prize will be bigger. This is what you can get:

Note that during the free games, every Mermaid Wild Symbol becomes sticky and stays in place during the next turn, which gives you additional chances to score a winning payline.

If you land 3, 4 or 5 Chest Bonus Symbols, you'll be shown a way to the special pick-a-prize bonus round. Reels will be removed as the new screen with several treasure chests pops up. Each one of the chests hides a cash prize, and you'll have 5 chances to unveil what's inside and collect the awards.

Under the Waves can be an interesting choice for fans of aquatic slots, but we don't think it would be overly appealing to the average casino player. There isn't anything special about it. The bonus rounds are mediocre at best. Free spins rounds and pick-a-prize bonuses of this format are the most basic specials any slot game can offer, so we are safe to say that it won't impress any experienced player. Taking this in consideration, we'd rather point you to some of NetEnt's slots or some of Microgaming's video slots to choose from.

Under the Waves Slot FAQs