The King is a word that conjures up several images. Medieval crowned heads, chess pieces and even Elvis Presley can all come to mind. But iSoftBet’s The King slot features none of these things. Instead, its focus is on the so-called ‘king of beasts’  - the mighty African lion. This game is set on the African savannah and features several iconic African animals as its symbols.

So read this The King slot review to see whether this African adventure is a real thriller of a wildlife adventure. 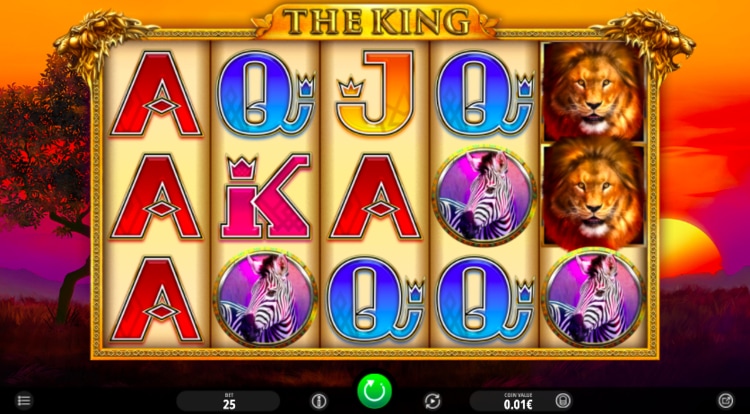 The King slot is played on a grid with 5 reels and 3 rows. There are 25 paylines. The game uses HTML5 technology, so can be played on a full range of mobile devices. It is designed to look good in both portrait and landscape mode on your phone or tablet.  The minimum bet that you can place is 25p and the maximum is £25. It was released by iSoftBet in May 2018, so has been around for almost 2 years at the time of writing.

There is an autoplay button in the game if you are pressed for time or just want to let the game take care of itself for a while. You can set this to end at a certain number of spins, or according to how much money you have won or lost. There is no turbo play option, however, so if you want to speed the action up you’ll just have to click the spin button more quickly.

Of course, basing your slot tactics solely around RTP is not especially advisable, so you should also know that the game is medium variance. This means that your chances of frequent small wins should usually be about the same as your chances of infrequent large wins. You can never take anything for granted with slots, though. When we played the game we found that the feature was highly elusive and we needed plenty of patience while waiting for it to arrive. When it did, it could offer some spectacular prizes, though.

Straight Out of Africa

The reels for this slot certainly have a suitably majestic setting. Not only are they set in ornate gold frames adorned with carvings of lions, they sit in front of a beautiful African sunset scene on the Savannah. Rich hues of purple and orange give this game a lovely crepuscular atmosphere. You can almost feel the day’s extreme heat draining away from the soil as darkness creeps over the land.

The game’s sound effects are pretty impressive and really immerse you in the world of the African plains. You can hear elephants call as well as crickets chirping and birds singing. You might even hear the roar of the King of Beasts himself if you’re lucky. The reels click and whirr pleasantly as they spin. Some pleasing little tunes play when you pick up wins and when certain symbols appear on the reels. The game has no music to speak of, apart from the little flourishes that play when you pick up a prize. We have to say that this is one of its strengths, actually. There is a great deal of slots that have music that is irritating to say the least. This game just has impressive sound effects.

The lower value symbols on the reels are the number 10 and the letters J, Q, K and A. They are written in different colours and are bold and easy to identify. The higher value symbols are African mammals. Anyone who has been on an African safari will have heard the term ‘the big 5’. This refers to the key species that you might see out in the wild – lions, leopards, elephants, rhinos and water buffalo. While these do not all appear on the reels, the buffalo, rhino and elephant do, and they are joined by a zebra. The animals are all depicted with impressive detail and fit perfectly with the game’s theme.

A male lion is the game’s wild symbol, and this appears stacked and can spin in on any of the reels. It will replace all other symbols to create winning combinations for you, apart from the scatter and the bonus symbols and also gives you wins in its own right. The scatter is the lion’s paw print. The bonus symbol is the cash wheel. You can find out how these can help in the next section of this The King slot review.

There are 2 bonus features for you to enjoy in The King slot. We’ll give you the full details of those here.

With The King, slot iSoftBet has produced a game that really delivers in terms of how it looks and sounds. The two bonus features also pack a punch when it comes to providing plenty of entertainment as well as chances to win big prizes. This game is pretty basic but is also a slot that is highly enjoyable to play. Is it as good as going on a real safari? Well, we couldn’t say that, but you’ll certainly find some excitement if you give this game a spin.

Wildlife themed slots are very popular, of course. If you enjoyed The King and fancy some more wilderness adventures, try Nordic Wild from Genii, King Tusk from Microgaming or perhaps Silver Lioness from Lightning Box Games.

🎰Is there a pay table in The King slot?
Yes, you can find a full pay table by clicking the game’s I tab. All of the symbols and each of their values are displayed, along with the scatter symbols and the wild. You can see what each one is worth and how many need to spin in to award you a prize. You can also find further details about the game’s bonus features and which symbols will trigger them. Make sure you click the I tab before you play the game!
🎰Is there another slot called The King?
Yes, there is. While were reviewing this game, we also came across a slot with the same name from a developer called Endorphina. This is a game with a theme based on medieval royalty, rather than African wildlife. Obviously, this makes playing it a very different experience to trying the iSoftBet game. If you want to enjoy great wildlife-themed entertainment, though, we recommend that you stick with iSoftBet’s The King!
🎰How often can I expect to trigger the features in The King slot?
Interestingly, iSoftBet include your chances of triggering the features in their press kit for the game’s release. They state that you can expect to trigger the free spins once in every 174 spins on average. The cash wheel feature should come along once every 152 spins on average, according to iSoftBet. As with RTP, however, this can only ever be a rough guide to what might happen during the game. It is best to take a flexible approach to slots strategy.