The Goonies Slot by Blueprint Gaming

Would you like to go for a treasure-seeking adventure, or stay home and play some online slots? Luckily, with The Goonies, you don't have to choose! This slot based on the popular '80 movie will take you on a slot adventure of your life, with all the famous memorabilia and staggering 12 bonus rounds. Yes, you read it correctly, The Goonies slot is really that action-packed!

We will explain every bonus feature in great detail, as well RTP, volatility, bet range and everything else you should know before playing, so make sure you stay with us until the end of this The Goonies slot review. 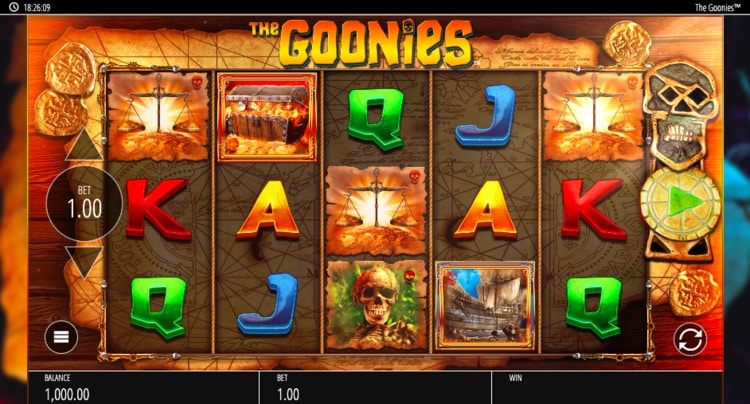 This Blueprint slot comes with a usual 5x3 matrix, which is the most usual set up these days. It has a solid number of 20 paylines and an autoplay option, for those of you who don't like to press the 'spin' button all the time. You can set up to 100 spins, as well as win and loss limits.

You can bet between £0.10 and £10 per spin, which may not be enough for some of the high-rollers, so we would like it more if the max limits were a bit higher. The Goonies slot looks equally great on desktop, tablet or phone, so be free to take it for a spin even on a smaller screen.

The Goonies Slot RTP and Volatility

The Goonies slot has a 96% RTP rate, which is perfectly in line with the industry standards. However, if you want to spin a single slot for a longer time, it would probably be a good idea to look around for games with a higher RTP than this. Check out our page about top slots in the UK to learn more.

This slot is a medium volatile casino game, meaning that it gives winning paylines quite often, while the payouts stay significant. In simple words, The Goonies slot has a nice balance between award sizes and win frequency.

Blueprint did a great job designing this game. The graphics look very detailed, and what is most important it all feels like a part of the original movie. The back of the game looks the same as the treasure map used in the film, and there are several recognisable golden coins scattered around the reels. All the artwork is well made, with a lot of crisp, bright colours. The gameplay is as smooth as it gets, so spinning the reels of The Goonies slot is a real pleasure.

The music is a childish, lively tune, so again something that goes perfectly with the theme of the game. There are a few classic slot noises now and there, for example when you click the 'spin' button, or when the reels stop, but nothing too distracting. You'll also hear a lot of famous lines from the movie when you hit some of the bonus rounds, such as 'Hey you guys' or 'Never say die', which is just another nice touch always welcomed in branded slots.

As you would expect, most of the higher paying symbols are inspired by the movie memorabilia, so you'll find coins, treasure chests, pirate flags and even a One Eyed Willie spinning on the reels. In some of the bonus games, there will even be symbols featuring movie characters. All of them have a great design, which follows the overall game designs, so we believe that all The Goonies fans will be more than satisfied with what Blueprint have come up with.

The Goonies Slot Comes with An Array of Bonus Rounds

As we mentioned at the beginning of this review, The Goonies slot is packed with 12 bonus features, which is the most we have seen in a while. The first tire of 6 bonuses is randomly triggered. So keep your eyes on the One-Eyed Willy's Riches symbol because it can start some of these bonuses on every spin:

Another thing to keep in mind is that you can choose to gamble after each of these bonus rounds. You can win a chance to play yet another bonus round, while if you lose a gamble, they will strip you from all the winnings and get you back to the base game.

This is one seriously packed slot. Almost everything about it is great, starting from the graphics and sound effect, to the way how the designers succeeded to bring back to life so many things from this famous movie. But the selection of bonuses is without any doubt the best thing about The Goonies slot. A selection like this will impress literally every casino player, so we warmly recommend The Goonies to every slot enthusiast, no matter if you're a fan of the original film or not.

📈What is the Goonies slot RTP?
The Goonies slot comes with an RTP of 96%. That is perfectly in line with the industry standard. However, if you want to play a single slot for a longer time, note that there are many games with much higher RTP, such as Thunderkick's 1429 Uncharted Seas with RTP of 98,6%.
🤔Where I can Play the Goonies slot?
If you want to try The Goonies slot, any of the Blueprint casinos we listed above would be a solid choice. Blueprint is one of the better software providers, so you can find their games, including The Goonies, in many of the top-rated UK online casinos.
💰How much can I bet per spin in The Goonies slot?
The minimal amount you can bet in The Goonies slot is £0.10, while the max stake is £10. This is a bit lower than we used to see, so some of the high-rollers may not be pleased. However, most of the regular players should find this as sufficient.