It’s fair to say that not many slots have ever been based around a theme of drilling for oil. But American gaming giant IGT has spotted a potential gap in the market and has produced a slot called Texas Tea. The name refers to an old slang term for the oil that was extracted from the ground of the Lone Star State.

Find out in the Texas Tea slot review whether they succeeded in producing a game that gushes with the rich promise of petroleum, or ended up drilling a well that ran dry. 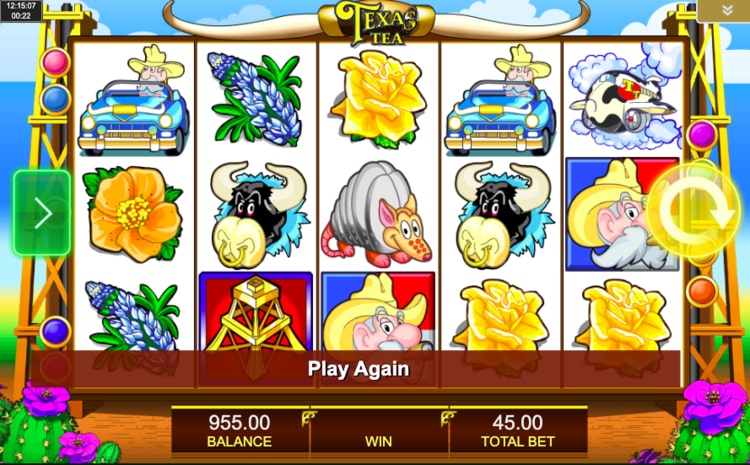 The Texas Tea slot machine is played on a grid of 5 reels and 3 rows, with just 9 paylines. UK players can usually bet between 10p and £90 per spin, though this may vary depending on which online casino you are using. The game was released by IGT in 2005, and is, therefore, one of the older slots titles that you will find in an online casino.

Despite its age, it can be played on mobile devices, though it relies on Flash technology rather than HTML5. There is an autoplay feature that can be used if you want to watch the action rather than keep clicking on the spin button. There is also a turbo play option, in case your time is limited and you need to speed things up a little.

When we looked into the details of the Texas Tea slot, we found that the RTP varied from operator to operator.  While many operators appeared to have the game with an RTP of 97.35%, we also saw Sky Vegas offering the game with an RTP of 94.93%, while at Paddy Power the game’s RTP is given as 87.50% to 96.20%. We suspect that this variance is due to the game’s age, as it came out in 2005. If you base your slots strategy around RTP then we suggest checking the RTP figure at your favoured online casino.

The Texas Tea slot has a low variance, which means that you are more likely to benefit from frequent small wins and trigger big feature wins less often. This certainly seemed to tally with our experience when we played the Texas Tea slot game.

How Does the Texas Tea Casino Slot Game Look and Sound?

When we played the Texas Tea slot online we were pleasantly surprised by the quality of the graphics and sound. The game, after all, was first released in 2005 and we expected things to be a little clunky and creaky. They weren’t which is perhaps due, at least in part, to the simplicity of the game.

The graphics make the game look like a kids’ TV show, and the dominant colour is the pale yellow of the Texas plains soil from which so much oil has been drilled. The reels are set between two old derricks, with a character called Texas Ted sitting above them and casting a curious eye across the action. Ted is the oil tycoon who is the game’s main character, and he wears a Stetson and sports a lush white moustache.

There is a dramatic movie type musical soundtrack that is solid enough and certainly fits with the theme of the game. Other sound effects are appropriate and help to create an atmosphere, but this game’s age is very clear throughout. Despite this age, the action on the reels is very smooth and slick. This is not a game that immediately looks 15 years old at all. It certainly looks very sharp and fresh when compared with more contemporary slots from Nektan, such as Gunslingers Gold.

Watch for the Yellow Rose

When it comes to the symbols on the reels they look quite appealing. Rendered in a simple, TV cartoon show style, you’ll see a stereotypical Texan in his car, an armadillo, a plane and a longhorn steer. There are also 4 flowers of different colours, with one of these being the yellow rose of Texas. There is also an orange flower, a blue one and a cactus.

There is no wild symbol in this slot. You should look out for the scatter symbol, though, which is Texas Ted with his moustache and Stetson. There is also a bonus icon, which takes the form of an oil well. We’ll look at how these symbols can help you win in the next section of this review.

There are 2 bonus features for you to enjoy in the Texas Tea slot. One is related to the Texas Ted scatter symbol and the other is triggered by the oil well bonus symbol. We’ll look at both bonuses in detail here.

This Texas Tea slot review ends on a positive note. We were pleasantly surprised that such an old game could still look so slick and provide so much entertainment. It still looks good for its age too, much like Texas Ted and his luscious, snowy moustache.

If you like games based on a theme of drilling oil, then you might want to try Oil Mania from Next Gen Gaming. Another game based on extracting mineral wealth from the earth that might be worth some of your time is Gold Rush from Pragmatic Play.

🎰Is there an app for Texas Tea slot?
No, there is not a separate app available for the Texas Tea slot. The game does work reasonably well on mobile devices, though. If you sign up for a casino that offers an app then you can play the game via that, of course. If you want to find a casino that offers an app for mobile users then use our up-to-date casino list at this website. You can find a comprehensive list of IGT casinos.
🎰How to win on Texas Tea slot machine?
You win on this slot by lining up symbols on paylines. The most valuable symbol is the Texas Tea logo, which is worth 10000 coins if you manage to spin in 5 of it on a payline. You can also collect big wins by triggering the game’s bonus features. You can read more about how these work in the review above. This is a low variance slot, though, so low value symbol wins will happen more often than large feature wins.
🎰Does the Texas Tea slot have a free spins feature?
Unusually for a slot, this game does not have a free spins feature. This is perhaps due to the game’s age, as free spins features have become almost standard for slots over the past decade or so. Nevertheless, the game’s two bonus features offer extensive chances to win lucrative prizes, so the absence of free spins does not require too much mourning.