Branded slots have become very popular in recent years, and Blueprint Gaming has joined in the fun with this Ted slot. Based on the Seth MacFarlane film of the same name that was released in 2012, this slot is jam-packed with bonus features and fun. Great graphics and sound really put you in Ted’s world, not that that is necessarily somewhere you would want to be!

In this Ted slot review, we’ll give you the full rundown on all you need to know about the game. Read on to discover more about this game’s entertaining characters and bountiful bonus features! 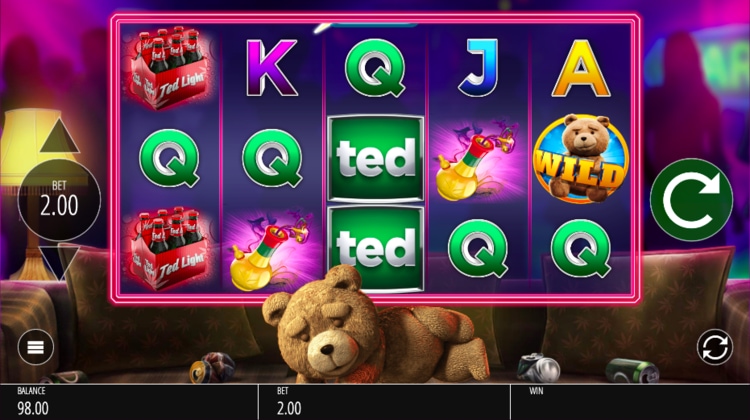 So let’s start with some concrete details about the Ted slot game. This Blueprint Gaming title is played on a grid with 5 reels and 3 rows. There are 20 paylines. Released in March 2017, the game is based on Seth MacFarlane’s directorial debut Ted, which starred Mark Wahlberg, as well as MacFarlane himself as the voice of the eponymous foulmouthed Teddy Bear. The game is available in 7 other languages apart from English, including German, Italian and Spanish.

The minimum bet in the game is 0.1 currency units and the maximum is 500. The game can be played on all mobile devices, thanks to its use of HTML5 technology. So if you like to play slots on your phone while you’re on the go, this game is ideal for you. The slot was released in March 2017, so there was a fair gap between the film coming out and the game following on its heels.

What is the Ted Slot RTP?

The Ted RTP rate is 95.804%, making it a little lower than most slots that you will see. This gives an indication that you are more likely to collect bigger wins on an infrequent basis, but RTP can only ever provide a rough guide to your prospects.

The Ted slot variance is classed as a medium, though, which indicates that your chances of plenty of frequent small wins and some infrequent large wins are about the same. This makes this slot a great game for both newcomers and seasoned slots gamers. This is especially true when you consider the range of bonus features in the game. We’ll take a closer look at all of those later, but next, we’ll see how this entertaining slot looks and sounds.

What Does the Ted Slot Machine Look and Sound Like?

When the Ted slot starts you get hear Ted himself deliver one of his politically incorrect comments, which gives you a nice flavour of what’s to come. The graphics are very good and mimic the film’s animation of Ted perfectly. You will also recognise Seth MacFarlane’s voice as the voice of Ted. The music that plays is from the film, and it’s acceptable enough, though you may find you need to reach for the mute button in a long session of play. The other sound effects add nice touches of little detail as the reels spin.

Those reels are framed with pink neon, giving them a suitably trashy vibe. The reels are set in front of Ted’s living room and couch, with Ted himself slumped in front of them. The depiction of Ted’s front room is really detailed, even down to the cannabis leaf patterns on the cushions on his couch.  All the animation is very smooth, and, despite its downmarket subject matter, this is a game that looks very classy indeed.

On the reels themselves, you can see a range of symbols associated with Ted and his laddish lifestyle. The higher value symbols are a bong, bottles of beer, a swan and Lori, who is the girlfriend of Ted’s flatmate John. The lower value symbols are the letters J, Q, K and A. Ted himself is the wild symbol, and he will substitute for all other symbols apart from the Thunder Buddies bonus icon. We’ll look at how the bonus icons work in the next section of this Ted slot review.

If you enjoy slots that are packed with bonus features then Ted is the game for you. There are two categories of bonus features in the game. First, there are the Ted Modifiers, and these bonuses can occur at any stage during the base game. They happen when Ted, who is lying in front of the reels, wakes up.

There are 6 features of this type:

As we mentioned previously, this game is packed with bonus features. We’ll take a look at the impressive array of features that make up the Thunder Buddies bonus next.

Get Busy with the Thunder Buddies Bonus

This Ted slot review now concludes with us saying that this is one of the finest slots that we have seen. There are so many bonus features that you will find yourself coming back to this game time and again to make sure that you have tried them all. The game has really captured the spirit of the film too, and the graphics and sound all contribute to making it a really fun-filled experience.

So whether you enjoyed the movie or not, we think you should make a point of visiting Ted’s apartment. There’s sure to be some fun to be found if you do!

🎰Where can I learn how to play Ted slot?
If you want to become familiar with all of this entertaining game’s excellent bonus features, the best thing to do is head over to an online casino that features Blueprint Games. There, you can usually play Ted in demo mode for free. This is an effective way to sharpen up your strategy before trying the game for real and risking actual money.
🎰Which casinos feature Ted slots?
If you’re looking for a good online casino that features the Ted slot, then check our list here at this website. We feature a fully comprehensive list of casinos that feature Blueprint Gaming slots. New ones are springing up all the time too. Keep your eyes peeled for the casinos with the best welcome bonuses too!
🎰Is Ted part of the Jackpot King series of games?
Some Blueprint games are part of the Jackpot King series which means that you can win even bigger prizes thanks to the progressive jackpots on offer. Look out for casinos that offer this option, as it can make a game on the Ted online slot even more lucrative.