Battle the Evil Diaz in the Taco Brothers Slot

Pico, Pepe and Paso are 3 names that you might not have heard of before. But these 3 Mexicans are the Taco Brothers, and their mission is to foil evil Captain Diaz. The Captain has banned the eating of tacos in the brothers’ village, and they need to bring his evil reign to an end. If that sounds like an entertaining story then Taco Brothers is the slot for you!

In this Taco Brothers slot review, we’ll give you the full lowdown on this game. Read on to discover all you need to know about the adventures of Paso, Pepe and Pico as they look to thwart Captain Diaz! 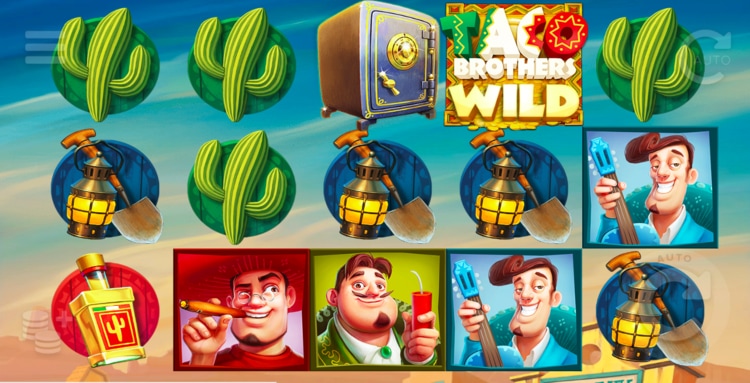 Taco Brothers was released in November 2015, and it has an RTP of 96.30%. This is pretty typical of an ELK Studios slot. The game has medium to high variance, meaning that your chances of picking up larger wins on a less frequent basis are slightly higher than your chances of taking lots of small prizes regularly. The Taco Brothers slot machine is, therefore, a good choice of game for both experienced slots fans and newcomers.

The slot has 5 reels, 3 rows and 243 paylines. The minimum bet that you can place is 0.1 currency units and the highest is 50. There is an autoplay option if you’re the type of slots gamer who likes to sit back and watch the action unfold. What does the action look and sound like? We’ll tell you all about it in the next section of this review.

Sights and Sounds in the Taco Brothers Slot

The Taco Brothers slot has a cartoon feel to it, with bold graphics that have a really fresh and charismatic feel to them. The three Taco brothers themselves are prominent characters who can be easily picked out on the reels. Those reels are a grid where the symbols slide into place rather than spin, and the gameplay is very slick and smooth.

The game has a clip-clop Mexican soundtrack, the rhythm of which sounds like an old donkey making his way down the street of pueblo. The sound effects are pretty impressive too, with a desert wind blowing in the background and some interesting clicks and whirs as the reels spin. There are some other bouncy effects when winning symbols appear too that help to create an immersive atmosphere. This game is certainly a true competitor of other Mexican themed slots like Pragmatic Play’s Chilli Heat or Quickfire’s Pistoleras, certainly when it comes to graphics and sound effects.

There are 7 normal symbols in total on the reels, and these include the three Taco Brothers themselves. The others are some cactus, a bottle of tequila, a guitar and some digging equipment. The Mexican village theme is strongly reflected in the choice of symbols. The big bell is the game’s wild symbol, but there is also a Taco Brothers wild symbol. The scatter symbol is safe, and this plays an important role in the game’s bonus features. We shall take a closer look at these symbols below.

Find the Safe to Benefit from a Taco Brothers Bonus

As we mentioned above, the safe is the game’s scatter symbol. You need 3 of these safes to appear anywhere in view on reels 1, 3 and 5 to play the free spins feature. This feature offers a little bit more than most free spins in slots and can provide plenty of chances to win big prizes. You need to keep your eyes peeled for the ‘running wilds’ during this feature, which takes place on a separate set of reels.

The narrative story of the feature is that the brothers are trying to ‘escape’ from the right-hand side of the reels to the left. You will see this action unfold as the bonus feature progresses. On each spin, one of the three Taco Brothers will drop onto the fifth reel and act as the running wild. After each of the free spins, they will jump one reel to the left as they try to escape. The free spins will continue until all three brothers have escaped across the reels.

There are 2 other symbols that you need to watch out for during the free spins feature. These are:

You will also benefit from a multiplier that is paid on all the wins generated by the free spins feature. This multiplier is set when the safe explodes at the start of the bonus round and can run as high as x3.

We found that triggering the feature happened fairly regularly when we played the game, something that probably reflects its medium variance. There is certainly plenty of action on the screen when the bonus round kicks in. The graphics and sound get really busy and the feature feels genuinely exciting. It helps to reinforce the impression that this is a fresh, fun game that does not take itself too seriously.

There are also Taco Brothers wild symbols to look out for. These occur in the base game and can help you trigger the feature or pick up more wins. If 2 of these symbols appear anywhere on the reels you are given a free respin. The reels where the Taco Brothers wilds are situated will not spin during this free spin, though. It can still result in a win, though, or trigger the bonus feature.

The Taco Brothers slot might not be the best ever game we have reviewed, but it is a lot of fun. ELK has really done a great job with the graphics, which explode off the screen with character and colour. If you like classic 20th-century cartoon TV shows, you are sure to appreciate the way the game looks and sounds.

The game has an impressive bonus feature too that creates plenty of excitement as well as paying out potentially very big wins. ELK seem to like Latin-flavoured slots too, as there is also a Taco Brothers Christmas edition slot to enjoy, as well as their bullfighting slot Wild Toro. If you enjoy Taco Brothers (and we think you will), make sure you check them out too.

But if you want a slot that pushes all the buttons when it comes to fun, fresh graphics, slick gameplay and bountiful bonuses, you’ll surely keep coming back to Taco Brothers.

🎰Is there more than one Taco Brothers slot?
Yes, there is also a slot from ELK called Taco Brothers Saving Christmas. It is also set in the village of Santa Maria, and it also revolves loosely around a plot where the brothers need to save tacos from Captain Diaz. It follows a very similar format to the Taco Brothers slot that we have reviewed here, so make sure you check it out, whether it’s Christmas time or not.
🎰Where can I play the Taco Brothers slot?
There are dozens of casinos that feature ELK Studios games like Taco Brothers. The best way to find casinos that feature ELK games is to check out our list of online casinos here at this website. As well as pointing you in the right direction to find Taco Brothers, we can also help you identify the best new casinos and those casinos that have the best promotional offers. Leo Vegas is one casino that features Taco Brothers.
🎰Does Captain Diaz turn up in any other ELK games?
We have already told you about the Taco Brothers Christmas edition slot that features all of the same characters, but you might also have noticed the name Diaz cropping up in another of ELK’s games. This game is Wild Toro. Although it does not feature the original Captain Diaz, his son is actually the matador in Wild Toro. It is nice to see him following in his father’s footsteps by being an all-round villain.