If you used to be the kind of kid that would root for Ursula over Ariel, for Magneto over Professor X, or for Draco over Harry, then Playtech’s villain-studded Suicide Squad slot is definitely for you. Based on the 2016 movie, the Suicide Squad slot features a rogue gallery of villain symbols, Suicide Squad Wilds, and a magical Enchantress Mode to keep you firmly on the dark side.

The question remains, though, is Playtech’s Suicide Squad as good as the movie it’s based on? Also, is it possible for people who aren’t fans of the movie or the characters to enjoy this slot? Read our Suicide Squad slot review to find out! 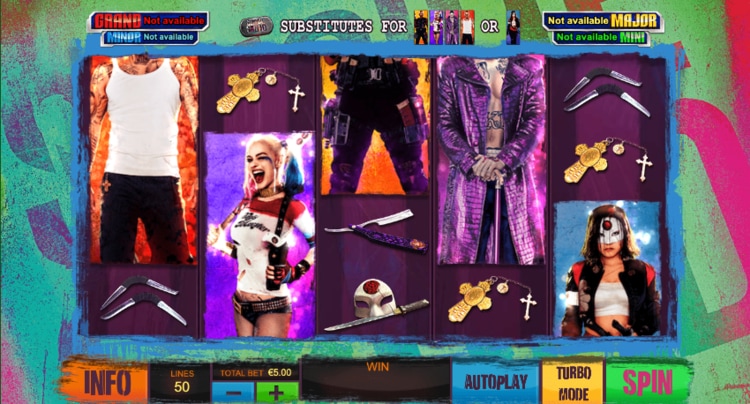 The Suicide Squad slot game has 5 reels and 50 paylines, giving players plenty of opportunities to rack up multiple small wins on each spin. Released in 2018, just two years after the movie, the online slot lets players wager anywhere between £0.50 and £500 on a single spin.

Being a PlayTech slot, it’s coded in HTML5 and fully playable on mobile devices and tablets. There are no touch-specific or portrait-mode optimisations, though, so it’s best played in landscape mode while on the go.

Playtech’s Suicide Squad slot is also, technically, a progressive slot. This is one of the games that falls under the umbrella of Playtech’s DC Super Heroes Jackpot, which is a progressive jackpot shared between a number of DC Entertainment-themed games.

Suicide Squad slot has an RTP of 94.14%, though this goes up to 95.13% when you take the jackpot into account. This is definitely lower than average, though not by too much. It’s a medium volatility slot, meaning that players can look forward to frequent low and mid-sized wins, while not counting out the chance to occasionally score a big win. Compared to other progressive slots, though, it does just fine. Playtech’s Age of the Gods slot, for example, has an RTP of 94.03-95.02%.

Unfortunately, the Suicide Squad slot presents players with a rather uninspired audiovisual experience. The soundtrack isn’t grating or annoying, but neither is it engaging or even a little bit fun. It sounds like a track from an early 2000s low-budget videogame, and definitely isn’t suited to long play sessions. The fact that stock “slot noises” are added to it does nothing to improve the experience, and makes it feel cheaper overall.

The visuals are also nothing to write home about, either. A look at the clickable buttons at the bottom of the screen tells you that the game designers just received “colourful” as a design brief. The game itself is vibrant, but the lack of animations or any real artwork here other than promo shots of the actors in costume make it feel like this slot may have been a rush job. This feeling is only compounded when taking into consideration the bonus features.

When we first began testing Suicide Squad, we assumed that the slot was rushed to market in order to match the movie’s release date. We then discovered that the slot game was released two full years after the movie, which leaves us wondering why this slot ended up making it to market in such a half-baked state.

Up Close with the Suicide Squad

There’s also a Suicide Squad dog tag symbol which can substitute for any of the high paying (i.e. character photo) symbols. We’ll discuss that in further detail below in our section on bonus features. The Enchantress Headpiece symbol (a crescent moon on a black background) can substitute for any symbol except the Enchantress herself. While the Enchantress looks like all the other characters, her symbol works completely differently. Again, though, we’ll get into more detail about this later on.

There are two major bonus features in Playtech’s Suicide Squad, and unfortunately neither are very thrilling. One is the Enchantress Mode, which is only activated VERY rarely, and the other is the Suicide Squad Wilds feature, which more often than not results in nothing happening.

When a high paying symbol (one of the Suicide Squad character photos) stacks to take up an entire reel, the Suicide Squad Wilds feature is activated. Each individual character has their own version of this, though there aren’t massive differences between them.

With each subsequent spin, one of the Wilds disappears. Multiple characters can stack in the same spin, meaning there can be several Wilds in play at once.

With the Suicide Squad Wilds only taking the place of high-paying symbols, this bonus feature often leads to small to medium-sized wins. They can also very often lead to no wins at all, though, as we found in our full day of testing the slot.

It’s extremely rare that this bonus feature actually gets activated, in our experience. Often times, an opportunity for it to come up will randomly appear, only the symbol won’t be fully stacked, and thus, nothing happens.

Even when Enchantress Mode does activate, though, not very much will happen unless you already happen to have Suicide Squad Wilds active on the reels. Otherwise, you’re left with just 4 Enchantress Wilds that can help you stack up a few small to medium wins, if that.

As far bonus features go, this one left us extremely underwhelmed. This is meant to be the games main bonus feature, the big event. Unfortunately, though, Enchantress Mode is as unexciting as it is rare.

The redeeming factor here is that Suicide Squad makes up part of the DC Super Heroes Jackpot series! This is a jackpot shared amongst a number of DC Entertainment themed games by Playtech.

If you’re lucky enough to trigger this event, you’ll get to pick from a 4x5 grid of cases and win of DC’s four jackpots. There’s a Mini, a Minor, a Major, and a Grand jackpot, and previous Grand jackpot wins have all been well over £1 million.

Slot Verdict: Missing the Essence of the Suicide Squad

While the prospect of a Suicide Squad slot seemed really exciting, Playtech have let us down with this one. The audiovisuals give the game a cheap, gimmicky feeling to it, and the bonus features don’t really do anything to engage players or enhance the experience.

If you’re looking for a super hero themed slot game, we recommend taking a look at the Justice League slot instead. For more medium volatility slots, we recommend Vikings Go Berzerk by Yggdrasil or Gonzo’s Quest by NetEnt.