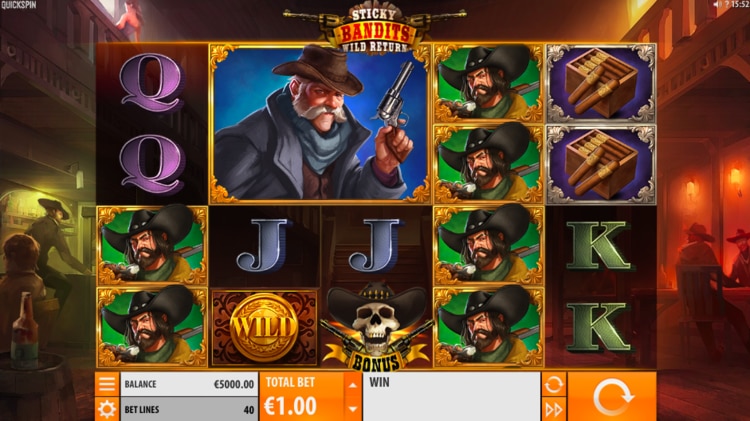 Sticky Bandits: Wild Return comes with 5 reels and 40 paylines. Reels have 4 rows but note that Bandit Symbols appear as massive symbols, meaning that they can be either 2x2 or 3x3 in size. This is a very important part of the game since those Bandits can become the sticky wilds during the bonus round.

You can start with the Sticky Bandits: Wild Return slot for just £0.20 and raise up to £100 per spin. Quickspin made sure that this slot looks equally great on both big and small screens, so all of you who like to wager on smartphones or tablets should be satisfied.

There are quickspin and autoplay features available. You can place between 10 and 1,000 automated spins, and if you click the 'Advanced' button there will be an option to set loss and single win limits.

This game comes with an RTP of 96.22%, which is not bad, but you still can find more favourable slots to play. If high RTP is what you're looking for, check out Thunderkick’s 1429 Uncharted Seas.

One more thing you should know is that Sticky Bandits: Wild Return has high volatility, meaning that there will be some empty spins, but once you hit the bonus round and start piling up those sticky wilds, all the waiting can pay off in just a couple of turns.

The background of the Sticky Bandits: Wild Return slot looks like an old dingy saloon with desperados lurking on all sides. There are guns, whiskey bottles, cowboy hats and everything else you would expect to see at the place like this. You'll see lots of moving parts in the background. The animations aren't exactly the smoothest we have ever seen, but they complement the surroundings very well. The whole game has cartoonish, but dark look to it, which makes it very appealing.

Graphics are great, but the soundtrack is even better. The music is a classic Wild West tune, but it's very catchy and engaging, so we believe most of the players won't ever reach out for the mute button. Competition in the area of Wild West slots is tight, but Sticky Bandits: Wild Return still manages to stick out. This Quickspin slot stands shoulder to shoulder with some of the best Wild West themed games, such as Dead or Alive II by NetEnt or I Am The Law by 1X2 Gaming.

The top-paying symbols in this game are the 3 gunslinging bandits. The highest paying one is the Female Bandit symbol, which awards up to 10x your stake. There are also whiskey and cigars symbols included, while on the lower end of the paytable you'll find just a bunch of redesigned card signs.

There are several special symbols in this game, including the Golden Coin Wild and the Sticky Wild with 3 golden skulls. The Quick Slot Bonus Symbol and the Bonus Scatter are there to trigger special rounds, but we will talk more about them in the following section.

The Sticky Bandits: Wild Return slot comes with 2 bonus rounds that award free spins, sticky wilds and instant cash prizes. Also keep your eyes on the Golden Coin Wild, because it can substitute for any other symbol on the reels apart from the Sticky Wild and the Scatter.

You'll need to land a single Quick Slot Bonus symbol to trigger up to 3 bonus games. Once you get the symbol, the reels will disappear, and you'll be transferred to an old fashion 3x1 slot with a chance to win up to 500x your stake. This is what else you can get:

To trigger Lucky Shot Free Spins Bonus, you'll need 3 Skull Bonus Scatter symbols anywhere on the reels. This feature awards 7 free spins. But the best part is that anytime a Bandit symbol appears the Lucky Shot Feature will transform one random symbol into the Wild. The Bandits will become Sticky Wilds, while all other symbols transform into regular Wilds. Each Sticky Wild stays in place until the end of the free spins and acts as a substitute for any other symbol on the reels apart from the Skull Scatter.

The Sticky Bandits: Wild Return slot is the real deal. It comes with two action-packed bonus games, so we believe that even the most seasoned casino players will find it appealing. The main bonus round brings 7 free spins, which may not seem as much. But because of the unique mechanics, you can easily land many regular and sticky wilds that will skyrocket your winnings. On top of that, you can also get involved into the Quick Slot Bonus round and instantly land up to 500x stake multiplier. It doesn't matter if you're into Wild West slots or not, Sticky Bandits: Wild Return is a game you should try.

I Am The Law Slot Review