Big Time Gaming brings us another swift megaways slot with a couple of interesting bonus features. This time, the action takes place in space where a Female Astronaut Wilds symbol can cover an entire reel and grant you both respins and up to 5x multiplier. But the best thing about the Starquest slot is its super smooth gameplay, which together with the megaways mechanic and the special Wild symbols make this BTG game a real pleasure to play. In our Starquest slot review, we will cover everything from bonuses and special symbols to RTP and variance, so feel free to take a look. 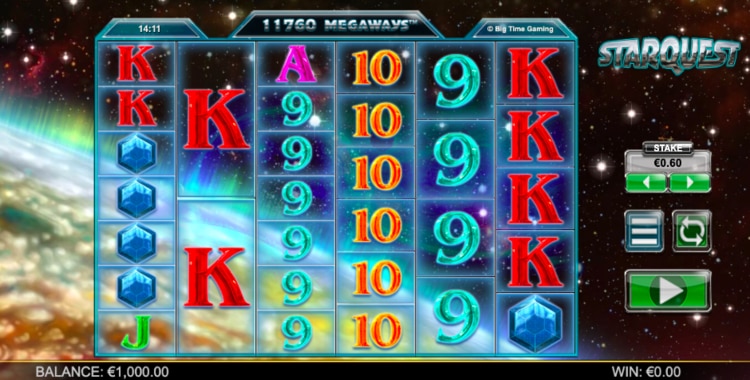 As many other megaways slots from Big Time Gaming, Starquest also comes with 6 reels and between 2 and 7 symbol slots per reel. Because of the specific game mechanics, this slot doesn't have a fixed number of ways to win. Depending on the turn, it can have up to 117,649 paylines. If you want to know how many active paylines there are on every turn, take a look at the megaways meter in the upper right corner.

The maximum betting limits are lower than we have used to seeing, with just up to £20 per spin. So, it's safe to say that highrollers probably won't be thrilled with this BTG slot. The minimum amount you can wager is £0.20, which is somewhere around the average. The good thing is that the game creators made sure Starquest runs equally good on all devices, so you are free to play it on both computers and smartphones.

There is also an autoplay option which allows you to set between 5 and 100 auto spins. For extra safety, try setting up loss and win limits as well.

This slot is above the market average both in terms of volatility and RTP. With a return to player rate of 96.9%, it's safe to say that we are looking at a very favourable slot game here. On the other hand, a high variance isn't necessarily a good or a bad thing. It means that you're more likely to get a couple of big payouts rather than many smaller ones, so it all comes to what kind of games you prefer the most.

Starquest looks like it was made 15 years ago. It seems more like a 90s arcade game than a modern slot. Everything feels dated, from transparent reels to buttons and control table. The background is an image of space with a glance of the Earth’s atmosphere. There are a few small animations now and there, but it all still looks outdated.

The whole design has a neon vibe to it with a lot of bright colours in contrast to the dark backdrop. There aren't many things we liked about this game's graphics, so if the visual aspect is important to you, it would be best to look further.

The audio part also isn't that great. Actually, it sounds generic and very quirky. It will play only when you press the 'spin' button, but even then many players will probably want to mute it. The Starquest slot comes with many audio and visual downsides, so you may want to search for some other similar games.

Luckily, there are several great games that might interest you, such as famous Starburst by NetEnt or Neon Reels by iSoftBet. In case you want to tackle some of the top megaways slots, both Raging Rhino Megaways from WMS and Pirate Kingdom Megaways from Iron Dog would be a great choice.

The top-paying symbols are differently coloured gemstones, which doesn't make much sense since space and stars are the main themes of this game. You'll also find a bunch of card sings and numbers spinning on the reels, which are not properly redesigned to follow the overall look of the game.

The most valuable symbol here is the Game's Logo that pays up to 15x your stake for 6 of a kind. Starquest doesn't have a scatter, but there is a Female Astronaut Wild symbol. It comes with a few special abilities, which we will talk more about it in the bonus section below.

Not Many Bonuses to Show

This BTG slot comes with a quite limited selection of bonuses. Both of the special features trigger during the base game, meaning that there is no separate bonus round.

Keep your eyes on the Female Astronaut symbol because it shows up as the Full Reel Wild which substitutes for every other symbol in the game. Since it always covers an entire reel with wilds, you'll get quite a lot of chances to form a winning payline every time this symbol lands. Note that every Full Reel Wild comes with a multiplier attached to it. You start with 1x, but it will rise every time the Respin Wild Feature activates.

The Starquest slot comes with a lot of shortcomings. The most notable one is an almost complete lack of bonuses. The Full Reel Wilds and the Respin Wild Feature actually work quite nicely together. The game is fast-paced, and there is something going on at almost every turn. However, this is still a super slim bonus offer that won't satisfy even complete beginners. On top of that, the graphics look dated, and the soundtrack is borderline annoying. With all this being said, the only thing we can do is advise you to check out some other slot games, because Starquest isn't worth your time.