Starburst is one of the most popular video slots online, and for a damn good reason. Produced by NetEnt, and distributed across a wide network of online casino sites, it had both the exposure and the necessary qualities to become a player favourite. Since its introduction, it has topped the “Popular Slots” lists, and it doesn’t seem to be going anywhere. Moreover, it’s been showcased in almost every legit casino’s promotions page. Starburst free spins are not a rarity. Starburst no deposit free spins are also a pretty common occurrence! Our Starburst slot review will give you both the details you want to know, and a few extra ones which will only make you want it more! 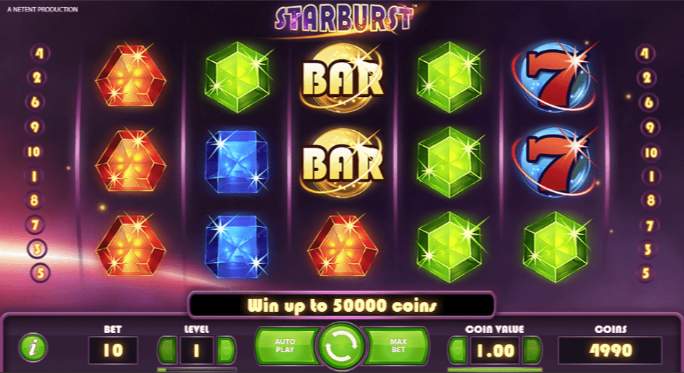 Before we jump to the numbers, we have to say that Starburst became a benchmark for future video slots. This includes the slots features, but it also cemented the slot layout we see at almost every newly released online slot.

It comes with a standard 5x3 symbol grid, but there’s a big twist, which we will discuss in the Starburst slot special features section. The Starburst slot follows the standard NetEnt structure, meaning it has 20 paylines, 10 bet levels, and 10 coin levels (CHECK). In reality, you can enjoy the video slot online starting with bets as low as £0.20, and as high as staggering £200 per single spin. It kind of pushed the limits, tested the waters for future slot released coming from the Swedish based Net Entertainment. Now, you can play Starburst, and play any other NetEnt slot, and you will still see quite a lot of resemblances.

Please note, the Starburst game has 10 paylines, but because you can form a line starting from both the leftmost and the rightmost reel, in reality, there are 20 paylines!

A video slot has to be complete and excel in several different disciplines to become a top-rated slot, one that’s loved by both seasoned and new slot players. One of them is a return to player rate (RTP), which determines what percentage of wager will the slot give back to players. In this regard, Starburst is slightly above the industry average, with RTP of 96.09%. This is very important to know if you plan on playing a single slot for a long time. But in case you just want to casually spin a reel from time to time, don't bother too much with RTP.

The audio! Any seasoned online slot player can easily recognise the epic Starburst soundtrack. It’s seamless, and it fits the sound the spinning reels make. In addition, triggering the bonus feature called Rainbow Reels is a real joy! In a way, the audio makes the regular Starburst spins enjoyable, teasing, getting you warmed up for the special bonus feature and the Re-spins that trigger so often! Well, at least they did during our Starburst slot review.

Another iconic feature of the Starburst slot game are symbols, which all take the shape of the easily recognizable jewels. Surely, they couldn’t have picked a better theme. They doubled down by having all of them in rainbow colours.

Those jewels are rewarding, but not as rewarding as the special symbol, which basically expands across the full reel, creating the already mentioned Rainbow Reels.

It is a special feature, and nobody can deny it. Most online slots form winning lines only from the leftmost reel. Although both ways paylines make the game a bit confusing to new slot players, everybody gets to like it, eventually. Both ways paying slots are kind of in the middle, between 243 ways slots and the regular, borderline boring ones that form winning lines only from the left reel.

One of the most rewarding aspects of the Starburst game, which basically started an entirely new range of video slots is the expanding Wild Reel. Not only it increases your chances of winning, but it also triggers another free re-spin. The Starburst re-spins have the same bet value as the triggering spin. This is, by all means, fair to all players. There isn’t a progressive jackpot, but, because of this bonus feature, it’s not as hard to land the Starburst jackpot which you win for a 5 of a kind of the Rainbow Wild. The more consecutive re-spins you get, the closer you are to the jackpot. Let’s also not forget that you can create winnings lines both from the left and the right reel.

There are no scatter symbols, confusing bonus triggers, it all comes from a single one, which, in all honesty, you can’t miss! It’s even in the Starburst logo.

Every single NetEnt casino, is in fact, a Starburst casino site. It’s why some online casinos decide to do business with Net Entertainment. It’s sort of become mandatory! Online casinos without Starburst, or NetEnt slot for that matter, look odd, especially to UK players. The Starburst UK madness started thanks to ample supply of Starburst Free Spins UK No Deposit “bonanza” a few years ago. Even to this day, you can easily find Starburst Free Spins. In most cases, you will get up to 20 Starburst free spins, but we’ve witnessed offers that easily steal the player’s attention. How does “100 Starburst Free Spins no deposit” sound? A good place to start your search for your next 50 free spins on Starburst is the casinos we recommend above. They’ve proven to be quite into Starburst! It’s safe to call them Starburst casinos!

Speaking of Free Spins, it’s kind of sad that there aren’t any in-game Starburst free rounds, one that you can trigger, say with a scatter or bonus symbol.

For the time being, you can play Starburst online-only, which is not a bad thing. You can’t find it in bars or pubs, but you can always play the Starburst Touch version, which is the dedicated mobile version of the game. To play Starburst Touch, all you need to do is hold your smartphone or tablet horizontally. Of course, you will need a real money casino account if you want the real deal. However, you don’t need a separate account, and you don’t have to download any software to access it. This was the case at the time of writing, things might change!

The mobile version follows the same rules, and you can win the same prizes. Nevertheless, we salute this move NetEnt made, releasing “Touch” versions for their popular mobile slots. Unsurprisingly, Starburst was part of the first batch!

Whether you’re playing Starburst with free spins, or you’re enjoying it with real money, it’s always a memorable experience. By the looks of the situation, it will always be listed next to the popular video slots. The only thing that changed since its launch is that the number of Starburst no deposit free spins has gone slightly down. Book of Dead has proven to be more popular in some markets. Then again, this is just a fluctuation. Starburst always comes back on the casino promotion page. If you are looking for a casino that offers the game for real money or for free, scroll up and you will find a selection of the best online casinos. We made sure we included every bit of detail in this Starburst slot review, including the Starburst casinos!

🎰How to play Starburst slot?
The easiest way to start playing Starburst slot is by visiting some of the casinos from our list above. Once you're in, register an account, make a deposit, and you'll be ready to start playing Starburst right away.
🎰How to win on Starburst slot?
All slots are based on a random number generator, which can't be tricked, meaning that there is no real way to ensure a winning payline. So the best thing you can do is keep playing and hoping for the best.
🎰What is the Starburst slot machine?
Starburst is one of the most popular slots by a famous casino software provider named NetEnt. This famous game features 5 reel and 10 paylines. If you want to take a closer look, we recommend you to visit any of the casinos from the list above.