Solider of Rome Slot by Barcrest

Ancient Rome is a popular setting for many slots, so were intrigued to see how iconic British developer Barcrest approached the topic with their Soldier of Rome slot. They certainly did something unusual with the way that the reels are structured, and managed to include some interesting bonus features too.

So read this Soldier of Rome slot review to find out whether this game is worthy of a Roman Triumph, or should have ended up on the wrong end of a lion’s mouth in the Coliseum. 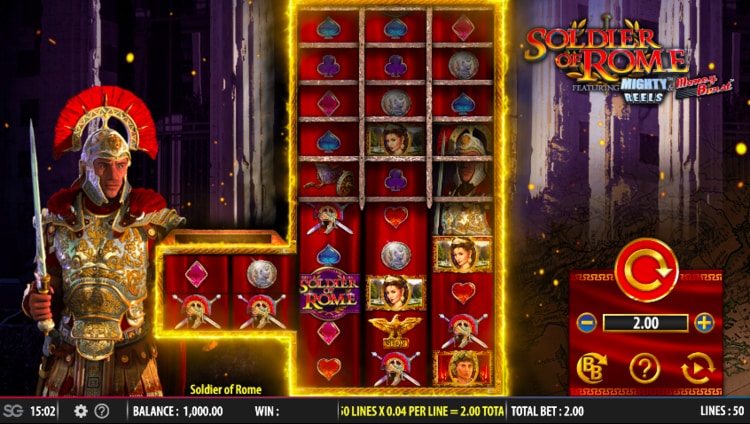 The Soldier of Rome slot machine is played on a slightly unusual grid. There are 5 reels, but 3 of them have 10 rows attached to them, and 2 have just 2 rows. The latter are the Money Burst reels that stand slightly in front of the main reels. There is a variable number of paylines that can rise as high as 100 during the feature, with 50 in play during the base game.

The minimum bet for UK players is usually 10p and the maximum is £500. This can vary from operator to operator, though, so you should always check. There is an autoplay button available in the game. The game uses HTML5 technology, so you can play it on your phone or tablet without any compromise in the quality of its graphics and sound. The slot was released by Barcrest in July 2018.

The basic RTP of the Soldier of Rome slot is 96%, but this changes if you use the game’s Big Bet option. We will take a closer look at the Big Bet option later on in this review, but it can change the RTP to between 93.78% and 97.82%. This makes using the Big Bet option worth considering. An RTP of 96% is pretty typical for a slot of this type. Other Barcrest slots with a similar RTP include Crown Gems (96.20%) and Lucky Streak (96%). There does tend to be a quite a lot of variation in the RTP of slots from this developer, due to the use of features like Big Bet.

If you like to use stats to shape your slots strategy, you will also be interested to know that this game is a medium volatility slot. This means that you can expect a reasonable balance between frequent small wins and more infrequent large wins. Again, the Big Bet feature affects the volatility of the game at different stages.

The Soldier of Rome slot looks quite impressive. There is a pretty detailed image of a Roman soldier standing at the left side of the reels. There are little touches of animation that light up his features as you play the game. The reels move in a slightly clunky and sticky way, but this feels deliberate. It seems like an attempt to evoke a retro atmosphere in the game, and we liked it. We think it works well. The reels are set in front of what looks like Roman ruins. Quite why Rome would be in ruins at this time isn’t clear, so we tried not to wonder too much about it.

The sound effects in the game are unusual and quite interesting. They have a very retro feel to them. The tune that plays when the reels spin really sounds like something from a cabinet based slot from a few decades ago. Given Barcrest’s history as a manufacturer of cabinet-based games, this is perhaps not too surprising. It certainly gives the game an interesting atmosphere that we quite enjoyed.

The lower value symbols on the reels in this game are jewelled playing card symbols. You’ll see purple clubs, blue spades, red hearts and pink diamonds. The higher value symbols are all objects associated with Ancient Rome. There is a chariot and a silver coin, as well as an SPQR legion standard and a pair of swords. The images are pretty detailed without being overly impressive, but they certainly did their job.

The soldier himself is the wild symbol. He will replace all other symbols apart from the scatter to create new winning combinations. He can only appear on reels 3, 4 and 5, but can appear stacked too, expanding to fill a whole reel. When he happens, he brings the 5 reels in the upper right-hand side into play, boosting the number of paylines to 100. These are the Mighty Reels. There is another wild symbol – the game’s logo featuring a soldier – that can only appear on the 2 rows to the left side of the main reels. The Soldier of Rome scatter symbol triggers the bonus feature, and we’ll take a look at that next.

Boost You Chances with the Big Bet Bonus Feature

There are 3 bonus features in this game, the main one of which is the free spins feature. That is not all that this intriguing game offers, however.

We really like the Soldier of Rome slot game. Although some players might not enjoy the retro feel of the graphics and sound as much as we did, they certainly give the game an individual feel that helps it stand out from the crowd. The bonus features are really good, and the addition of extras like the Mighty Reels and the Big Bet feature really boosts your chances of taking home a big prize or two.

So this Soldier of Rome slot review ends on a positive note, but urging you to give this game a try. If you enjoy slots set in the Eternal City’s past, then you might also enjoy Gladiator by Playtech, as well as Rome and Egypt by WMS.

🤔Can I play a Soldier of Rome slot demo game anywhere?
Unfortunately, Barcrest does not offer the facility to play its games in demo mode at the SG Gaming website. SG Gaming is the American company that owns Barcrest. You can usually, however, play slots in demo mode for free at your chosen online casino. This is a good way of getting used to the games, and hitting upon a strategy that brings success. Check with your casino’s customer service team if you are in doubt.
💰What is the maximum prize available in the Soldier of Rome slot?
The maximum prize available in this game is £250,000. This can be won during the Big Bet feature where you pay extra to boost your chances of taking home really big prizes. You can read all about the feature in the relevant section of the review above. This was another aspect of this game that we really enjoyed, and it certainly provided us with plenty of additional entertainment when we tried the game.
🎰Are there any Soldier of Rome slot strategy tips that you can give me?
As with any other slot, it is hard to come up with hard and fast rules as to how you can boost your chances of winning on this game. The Random Number Generator determines all the outcomes, as with all slots. You can however, pay to use the Big Bet feature, which increases your chances of winning. As with all slots, careful bankroll management is also key to enjoying success on this slot.