Slots O' Gold is a light-hearted Irish-themed slot game coming out of the Blueprint Gaming's workshop. It has everything you would expect from a game like this, including leprechauns, pots of gold, four-leaf clovers, as well as expanding wilds and even a progressive jackpot.

If you want to learn more about this slot's RTP, volatility, design and progressive jackpot mechanics, stay with us until the end of this Slots O' Gold review. We’ll discuss everything you need to know before playing this joyful Blueprint slot. 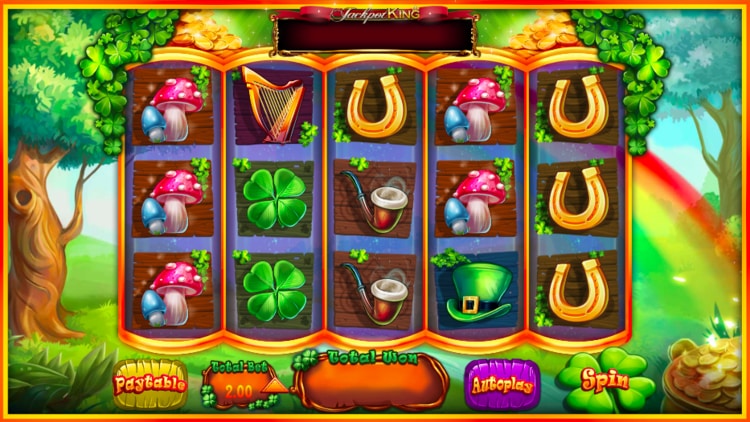 Slots O' Gold is played on the usual set of 5 reels with 3 rows. It features 10 paylines, which is way less than most other games on the market. If you're a fan of slots with a greater number of ways to win, check out some of the 243 payline slots, or try games with megaways mechanics for even more excitement. There is also an autoplay option, which allows you to set as much as 100 automated spins, as well as both win and loss limits.

This game is a treat for all the high-rollers among you since the max bet per spin is up to staggering £500. Players on the budget also would not be disappointed since the low limit sits at comfortable £0.20. Note that Slots O' Gold slot machine is optimised for all devices, meaning you can play it on smartphones, tablets and all computer operating systems.

Slots O' Gold comes with super low RTP of 92.48%. This is common with progressive jackpot slots. But anyway, in case you are searching for a slot to play for an extended time, it would be best to avoid Slots O' Gold. There are many slots with high return to player rates, such as NetEnt's Bloodsuckers with RTP of 98%. However, if you're just a casual player who wants to spin the reels couple of times and try its luck with the progressive jackpot, go ahead, since RTP makes a difference only over a huge number of spins.

Slots O’ Gold is a medium variance slot game, which means that both award sizes and win frequency will stay on a pleasing level.

The market is very saturated with Irish-themed slots, such as Leprechaun's Luck and Rainbow Riches, but somehow new ones keep popping up all the times. Like all others, Slots O' Gold is full of Irish clichés, including the four-leaf clover, leprechauns and rainbows.

Everything is green and feels super cheerful. The background is a grassy meadow, with a few tries and a big rainbow. The whole slot has a cartoonish look, which just perfectly complements an overall jolly atmosphere. Slots O' Gold has very smooth gameplay, and everything happens quickly.

There is no background music in this slot. When you press the 'spin' button you'll hear a bunch of quirky slot sounds and that's it. We expected some up-tempo Irish music, but instead, we got just a moment of silence. Slots O' Gold looks and feels good, there is no question about it, but the thing is that it doesn't bring anything new. We have seen all of this many times before.

The great thing about Slots O’ Gold is that every symbol is custom made, so there are no card signs or numbers. As you could probably guess by now, all of the symbols are inspired by the Irish culture, so you'll find things like leprechauns, four-leaf clovers and pints of Guinness all spinning on the reels. The highest paying symbol is a pot of gold, which can bring you up to £1000 for 5 of a kind.

The Leprechaun and the Slots O’ Gold Logo are considered special symbols. Wild starts one of the bonus features, which we will talk more about in the following paragraph. The game logo can substitute for every symbol to form a winning line. This is a bit unusual set of special symbols, but it's all straightforward, so you should get the hang of it very quickly.

Slots O' Gold slot machine comes with two major bonus features. One of them includes free games, while the other can lead you to a progressive jackpot. We will discuss both of them in greater details down below.

Rainbow Respins feature is triggered every time a Leprechaun Wild lands on reels 2, 3 or 4. It will expand to cover the entire reel with wilds. After that, you'll be awarded a respin with expanded wild stuck in place. If you're lucky enough to land one more of these, you'll get an additional respin. For max winnings, look for up to 3 of expanding sticky wilds.

Apart from respins, Slots O' Gold offers progressive wins as well. It's part of the Jackpot King network, which contains these 3 progressive prizes:

More crowns mean more multipliers, with the max value of 20x. But if you get to at least 15 crowns, the Reel King wheel of fortune feature will start. Here you get to spin the wheel and get even more multipliers or ultimately the main progressive jackpot prize.

Slots O' Gold is a solid Irish-themed game. Graphics are crisp and clear, the gameplay is very smooth and the whole atmosphere is very cheerful. But the thing is that Slots O' Gold isn't unique in any way. It looks like a lesser version of some more famous Leprechaun-themed slots, such as Leprechaun's Luck or Rainbow Riches.

Apart from the progressive jackpot, bonus rounds aren't particularly impressive, while the RTP is critically low, so we don't recommend this slot for more dedicated players. However, if rainbows, leprechauns and four-leaf clovers are your thing, trying Slots O' Gold may not be such a bad idea.