Siren's Kingdom is full of riches! This underwater slot adventure comes with a generous bonus round that can get you up to 36 free spins in a single batch. If that's not enough, there are also both expanding and sticky wilds in the base game and during the free spins. These special symbols come with a few interesting extra features that make this Iron Dog slot even more appealing. Read our Siren's Kingdom slot review to learn everything there is to know about bonuses, RTP, volatility and all other factors that can impact your playing experience. 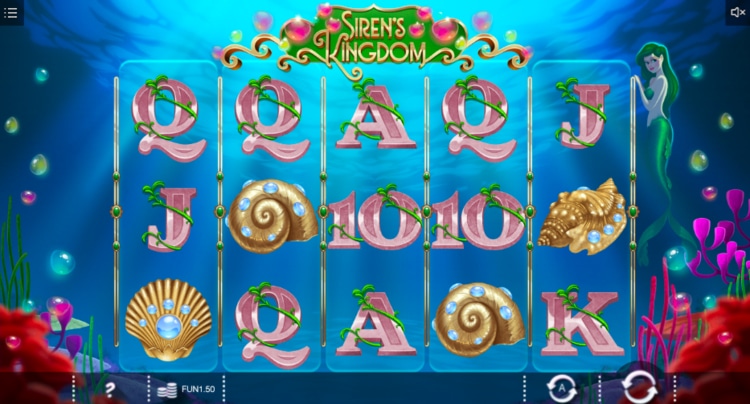 With 5 reels in 3 rows, Siren's Kingdom is as basic as it gets. It features 30 ways to win, but keep in mind that you can't manually change that number. There is a very comprehensive autoplay option available. However, quickspin feature isn't included, so you won't be able to additionally speed up the game. The maximum number of auto spins is caped to 999, with an option to program it to stop when you:

You can start playing Siren's Kingdom on both desktop and mobile devices for as little as £0.30 per spin. In case you want to bet big, note that the game lets you raise stakes up to £90 per spin.

Siren's Kingdom RTP is 96.18%, which is pretty close to the market average. On the other hand, this slot comes with a medium to high variance. It means that you probably won't get small wins on almost every spin like you would with low variance slots. However, you'll get a chance to score up to 4000x your stake in a single turn, meaning that all the waiting can pay off very quickly.

Design and Audio Features - Dive in a Deep Blue Ocean

When starting with the game that's named Siren's Kingdom, you expect to see many sirens and an Atlantis-like underwater city, but instead of that, there is just one lonely siren looking at an empty ocean floor. Don't get us wrong - this is an excellent looking game. It's just a bit different and less dynamic than we expected.

The graphics look nice and crisp, with lots of moving parts in the background. The animations aren't the smoothest we have ever seen, but they complement the surroundings very well. The game looks like it's played just under the surface, making it a very relaxing experience.

The music sounds more like a soundtrack from an action movie than something you would expect to hear in an underwater fairy-tail adventure. But we liked it anyway. It's very melodic and engaging, so you probably won't feel the need to press the 'mute' button after playing several spins.

Siren's Kingdom is a well-produced slot, there is no question about it. But if you would like to explore other ocean-themed games, we advise you to start with Riches of the Sea from 2 by 2 Gaming or 1X2 Gaming's Under the Waves.

The highest paying symbols in the Siren's Kingdom slot are 3 Golden Seashells and a Golden Starfish. They are all beautifully designed, but we would like to see a bit more diversity here since all of the seashells look very similar. Rest of the symbols are redesigned card signs and number.

Red-Haired Siren symbols act as the Expanding Wild, while the Golden Octopuses are the Free Spins symbols. The third special symbol is the Purple-Haired Siren Sticky Wild, but since it can only show up during the free spins round, we will talk more about it in the bonus section below.

You'll find a single bonus round in the Siren's Kingdom slot that can bring you a plethora of free spins, as well as the special Sticky Wild symbol. Apart from that, look for the Red-Haired Siren Expanding Wild in the base game. It can show up anywhere in the first row and cover the entire reel with wilds that can substitute for any symbol apart from the Free Spins Golden Octopus.

This feature starts once you land at least 3 Golden Octopus Free Spins symbols anywhere on the reels. But if you get 4 or 5 Octopuses, even more bonus games will be waiting for you.

New Purpled-Hair Siren Sticky Wild will appear during the free spins game. Once you get this symbol anywhere on the reels, it will expand in two directions on the second spin, giving you much greater chances to score a big win. After that, the Sticky Wild will disappear.

Siren's Kingdom is a solid slot game, but nothing more than that. It comes with great design and a couple of nice bonus features, but none of it will blow your mind. Don't get us wrong, up to 36 free spins and a special Sticky Wild makes a great bonus round. However, it's not something that will make an experienced slot player come back for more.

The whole game is well made, with lots of beautiful graphics and sound effects, so we believe it's worth a shot. If you don't know what slot to tackle next, try Siren's Kingdom. It would be an interesting side-stop before you settle with some more comprehensive game.