The mysterious sands of old Arabia have proved to be fertile ground for slots developers over the years, and Barcrest have contributed to the genre with their Sheik Yer Money slot. As with many of their games, Barcrest give you the chance to win some larger prizes with their Big Bet feature. There are also some other intriguing bonuses to explore in this game.

So read this Sheik Yer Money slot review to find out whether this game is worthy of an oil baron’s palace, or is just another desert vagabond wandering among the Bedouin of the dunes. 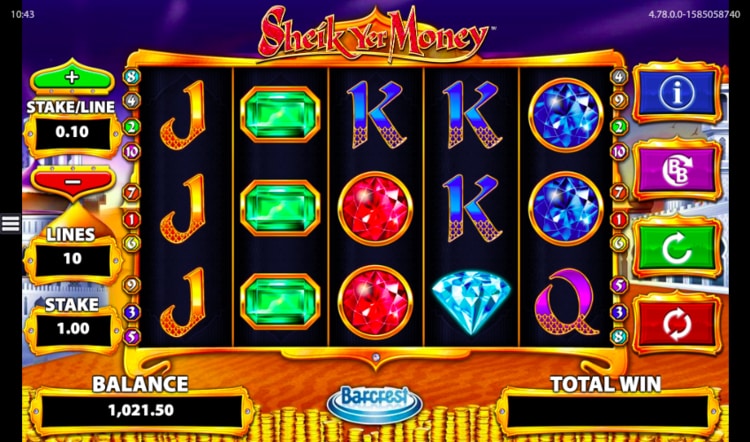 The Sheik Yer Money slot is played on a grid with 5 reels and 3 rows. There are 10 fixed paylines. You can see the number of active paylines displayed in a shield by the side of the reels. The minimum bet for UK players is 10p and the maximum is £100. This might vary occasionally depending upon which casino you are playing at, though, but the variation is likely to be minimal.

The slot uses HTML5 technology, which means that it can be played on a wide range of mobile devices. It was released in January 2016, so has been on the market for just over 4 years at the time of writing. There is an autoplay button that you can use if you want to watch the action on the reels rather than take an active part in things.

Sheik Yer Money has an RTP of 96.2%, though this can change when you use the Big Bet feature. If you pay to use the Big Bet feature, the game’s potential RTP increases to 98.20%. This is a pretty typical RTP for a slot of this type. Barcrest slots do tend to vary quite considerably when it comes to their RTP, though. Moon Shadow, for example, has an RTP that varies between 96.08% and 98.00%. Snow Leopards is a slot with an RTP that varies between 94% and 97.75%.

The game is medium variance slot, so your chances of picking up infrequent large wins are about the same as the chances of smaller wins coming along at regular intervals. The lack of features affects the game’s variance, but that’s something we’ll tell you all about later on in this review.

The reels in the Sheik Yer Money slot hang in an ornate golden frame. This frame stands in front of an Arabian desert scene with white towers and golden sands. A deep blue sky at the top of the screen completes an appealing and immersive look to the game. As with a lot of Barcrest games, there is a slightly retro feel to the graphics. We think that this is quite appealing, and reflects the fact that Barcrest has developed plenty of games for cabinet-based slots in the past. It can feel a touch clunky but we liked it. Maybe it’s our age!

That retro vibe extends to the game’s sound effects too. An Arabian flavoured tune plays while you spin the reels. It is not bad, especially when compared to some of the rubbish that passes for music in other slots we’ve reviewed. It helps to create an immersive atmosphere, though you may feel a need to use the mute button after a while during a long session of play.

Gemstones Sparkle on the Sandy Reels

The symbols used on the reels in this game are pretty basic. The lower value symbols are the number 10, as well as the letters J, Q, K and A. The higher value symbols are gemstones – rubies, emeralds, diamonds and sapphires. If you don’t spin the reels for a while, a cheeky Arabian chap appears at the side of the screen to give you a little bit of hurry up. He looks at his watch, and will scuttle away once the action starts up again. That kind of touch is something that we appreciate here, and it certainly adds some charisma to the game.

The only additional symbol on the reels is the genie’s lamp. It can appear stacked, and it changes into matching symbols wherever it lands. This means that there is no free spins feature in the game, and no real bonus feature in the truest sense at all. There are still additional extras that can create wins for you, and we’ll look at those in the next section of this Sheik Yer Money slot review.

Bonus Features in this Barcrest Slot

While we enjoyed the appearance and sounds of the Sheik Yer Money slot, we were very disappointed with the range of bonus features on offer. There are basically two features, but you have to pay extra to access one of them.

There are some good things about this game that we enjoyed. We liked the retro feel to the graphics and sound effects. We were disappointed that there were no real bonus features to enjoy beyond the Big Bet feature, though. This left us with a feeling that this game was lacking something, as though it had not fulfilled its entire potential and had been finished off in a hurry.

So this Sheik Yer Money slot review has to conclude on a slightly negative note, and say that you should probably look elsewhere if you want an exciting Arabian themed slot. You might want to try Arabian Nights from Net Ent, or possibly Aladdin’s Wishes from RTG.

🎰Are there any free spins available in the Sheik Yer Money slot?
If you like lucrative and exciting bonus features, this is not the slot for you. There are no free spins on offer, with the only real additional feature being the Big Bet, and you have to pay extra to access that. There is the Sheik Shake, but this occurs at random and does not offer any free spins to you. We think that this is a real drawback in the game, and we would have liked to see some free spins on offer to players.
💰Is it worth paying extra for the Big Bet feature in Sheik Yer Money?
The answer to this really depends on how much money you are willing to risk. Paying extra for this bonus feature certainly increases your chances of winning. It does, though, also mean that you are taking larger risks. Whether you want to take those risks or not really does depend on the size of your bankroll. You should always remember that careful bankroll management is the best slots strategy to follow, whether for Sheik Yer Money or any other slot.
💎What is the most valuable symbol in the Sheik Yer Money slot game?
If you click on the I tab on the screen while you are playing this game, you can see what each symbol is worth on the game’s paytable. If you do that, you will see that the most valuable symbol in the game is the diamond. If you spin-in 5 of the diamonds on a payline then you will receive a prize worth 250x your stake. If 4 spin in then the prize is worth 200x your stake.