Sakura Dragon is yet another one of the many slots that make use of an Oriental theme, with this one set in Japan. The Sakura of the game’s title is a cherry blossom that is associated with Japan, and this game is rich with cultural references to the Land of the Rising Sun. There are even flying dragons to spot!

Read this Sakura Dragon slot review to see if this game takes you on the blossom-strewn, mystical Asian odyssey it promises. 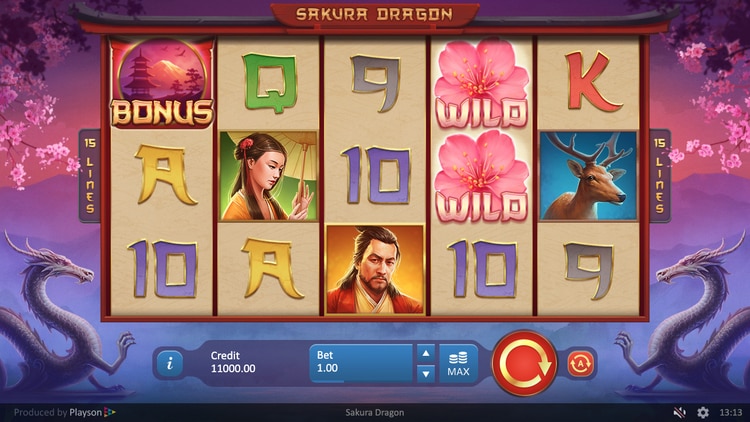 The Sakura Dragon slot is played on a grid of 5 reels and 3 rows, and there are 15 fixed paylines. An autospin feature is present if you want to take on a spectator’s role when it comes to the action. The minimum bet is 20p and the maximum £100. You can win up to 750x your stake on each spin, so big prizes are there for the taking if you enjoy a bit of luck along the way.

The RTP of Sakura Dragon is 95.3%, though Playson don’t reveal the official number on their website. This would make it pretty typical for a slot of this type, and comparable to other Playson slots such as Sevens and Fruits (96.31%) and Thunder Reels (96.13%). The slot has a medium to high variance, so it pays to wait for those big wins to come along.

The game is a quite recent addition to the Playson range of slots, having come out in April 2019.It can, as you would expect, be played on a range of mobile devices with no compromise in quality, thanks to its use of HTM5 technology. You can access the paytable for the game by clicking on the I tab at the foot of the screen.

The Sakura Dragon slot game certainly has a visual appeal to it, with pleasant pink shades creating an immersive, slightly dreamy atmosphere. The reels are framed by what looks like a wooden pagoda, and are set in front of a mystical scene where the dominant colours are pastel shades of pink and purple. Two dragons sit either side of the reels, adding a nice touch of atmosphere and calling to mind the title of the game.

The musical soundtrack is predictably Japanese influenced, with flutes playing slightly eerie notes that call to mind soothing mountain breezes. You almost expect a Shinto mystic to start intoning words of minimalist wisdom over the music, as it sounds a lot like something you might hear before a talk on Japanese philosophy. It is certainly much more pleasant to listen to than most of the music that you encounter on slots, and we found ourselves letting it play rather than reaching for the mute button after 30 seconds.

Watch out for Wild Blossoms

As well as the music, there is a clicking sound that appears when the reels spin, as well as tiny flourish that plays when a win appears on the reels. The clicking can become a little irritating after a while, though some might argue that it adds a touch of atmosphere. The sound effects certainly have a high quality feel to them, though, something that is matched by the design of the symbols on the reels. The lower value symbols are playing card values that run from 9 through to A. These are written in Japanese style script and are of various colours. The higher value symbols are pretty detailed and appealing in terms of their appearance. You will see a fox, a deer, a Japanese girl with a parasol, a Japanese woman with a fan, and a Japanese man in traditional dress. They look pretty classy and we were impressed with the overall quality of the graphics on the high value symbols

The wild symbol is the Sakura cherry blossom, beautifully rendered in pink. This appears on reels 2,3 4 and 5 and can substitute for all symbols to create winning lines for you, except the bonus symbol. The bonus symbol is also pink, and depicts a peaceful Japanese mountain scene with a pagoda. If 3 or more of them appear on the reels then you will trigger the free spins bonus feature, something that we’ll take a look at next.

There are two features that can boost your chances of taking home a big prize in the Sakura Dragon slot game. You need to keep your eyes peeled for flying dragons and the bonus symbol if you want to trigger these features. You can see why below.

When the wild dragon flies, it can bring you some gifts. Or at least some extra wild symbols anyway. If dragons fly across the reels during either the base game or the free spins feature they will turn all the symbols in their wake to wilds. This can, obviously, give you a tremendous boost when it comes to your chances of taking home some lucrative wins. This will happen at random, and is not something that you can influence.

Of course, the man bonus in this slot is the free spins, and it’s fairly generous when it comes to the amount of spins that you can pick up. If you land the 3, 4 or 5 of the bonus symbol anywhere on the reels then this feature is triggered. If the symbols appear on a payline, you will also get a payout of 5, 10 or 50 times your stake, depending on the number of bonus symbols that appear.

The number of spins that you receive depends on the number of bonus symbols that appear on the reels. For 3 symbols, you get 8 spins, for 4 it’s 12 and for 5 it’s 20. One aspect of this bonus that we particularly enjoyed was that the way that the flying dragons and their bounty of extra wilds appeared more often than they did in the base game. This, obviously, helps to generate plenty more chances to win big prizes.

There are some impressive aspects to this game despite it being pretty basic overall. Although there are only two bonus features both can be pretty generous. We particularly liked the flying dragons leaving wilds in their wake, and the fact that you can gain up to 50 free spins with a bit of luck. There is not the same level of involvement as you get with the features in other slots, but this game was entertaining enough, and it has some good music and above average graphics to enjoy.

If you like Japanese themed slots then you might also want to try Koi Princess from Net Ent, Lucky Koi from Microgaming, or perhaps Sumo Spins from Red Tiger.

🎰Can I retrigger the bonus feature in Sakura Dragon?
Yes, this is a slot where you can retrigger the bonus free spins if additional bonus symbols appear on the reels during the bonus feature. The maximum amount of free spins that you can receive is 50, though, so you need to bear this in mind. Remember that the flying dragons appear more often during the free spins feature too, so you get additional chances to win bigger prizes, as long as you stay lucky!
❓When was Sakura Dragon released?
Sakura Dragon is a relatively new game, despite the slightly retro feel to some of its graphics. The game first appeared on the market in April 2019, and updates were applied to it later that year. This means that it maybe not has had the time to establish itself properly as a favourite of slots gamers quit yet, which is possibly another reason for you to give it a go and help build its reputation!
💷Which symbol is the most valuable in the Sakura Dragon slot?
The most valuable symbols in this game are the bonus and wild symbols. They can both pay out a prize worth 50 coins for 5 symbols on a payline. The Japanese man is the most valuable of the standard symbols, and you will win 25 coins if 5 of him appear on a payline. The best way of finding the values of the symbols is to consult the game’s paytable. Click on the I tab at the bottom of the screen to access this.