Ainsworth’s Roaming Reels aims to transport players to the wonderous plains of the Serengeti in this African-themed slot game. The name might not suggest it, but this game is actually very straightforward and doesn’t have any sort of learning curve, like more complicated games might have.

The point of this Roaming Reels slot review, though, is to see how Ainsworth Gaming Technology’s contribution to African-themed slots compares to the competition. Should you play this, or Thunderkick’s Pink Elephants, or maybe even WMS’ Raging Rhinos Megaways? Continue reading below to find out. 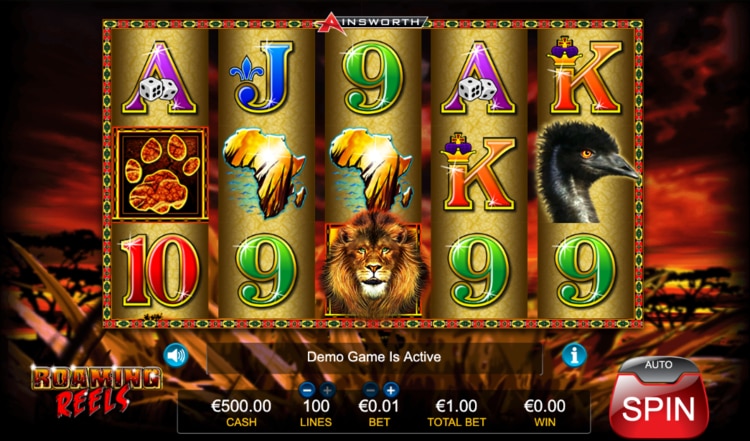 Ainsworth’s Roaming Reels is played on 5 reels and 3 rows, though still features up to 100 paylines. We say “up to” because the player can actually control how many paylines are active, all the way down to a minimum of 1.

Players can wager between £1 and £75 on a single spin, which is plenty of wiggle room to accommodate both casual players as well as some of the higher rollers. Players will also want to note that there are some subtle differences in the pay table between the main game and the bonus round, but we’ll discuss that further below.

The game does have an autospin feature, though this is limited to 25 spins, meaning that the player will find themselves reactivating it every few minutes or so. We’d rather see an autospin limit of 100 or 200 spins, as with most other online slots games, though we’ve seen this limit in other Ainsworth games, so this is just how they do things.

Roaming Reels has a theoretical RTP of 94.14%. This is quite a bit lower than we usually like, though average when compared to other games by Ainsworth, such as Jade Emperor. Roaming Reels is a high volatility slot, meaning it’s better suited for players who like to take risks for big wins than for players who enjoy a steady stream of small and medium wins.

Audiovisuals – Welcome Back to the Year 2000

Ainsworth Gaming Technology isn’t exactly known for their groundbreaking or polished designs. A lot of their games are ports of land-based video slot machine games, and this informs a lot of their designs.

When we look at Roaming Reels, in particular, we’re faced with a game that would be completely at home in a land-based video slot machine. For starters, there’s no background music in the base game, just some very tinny, stock “slot” noises. There’s a background track during the bonus round, but this sounds like a loosely African-themed track from the late 80s to early 90s.

The visuals and UI are basic, and all tie in to the African theme, other than the low-paying symbols, which are just 9 to Ace from a deck of cards. None of the individual elements look particularly bad, but they combine to create a distinctly cheap-looking, generic, African-themed online slot game.

The high paying symbols are Africa (i.e. a drawing of the continent), a Zebra, an Emu, a Gazelle, and a Paw print. The low paying symbols are just 9 to Ace from a deck of cards, with 9 and 10, Q and J, and K and A being pairs of identical symbol value. You’ll still need to match up symbols of a kind to activate those paylines, though.

The Wild symbol is the Lion, and this can substitute any other symbol in the game except for the Scatter. The Lion Wild only appears on reels 3, 4, and 5 in the base game, though, meaning you’ll still need to start off your wins with at least two consecutive symbols. This is a little more restrictive than we’d like, but not a dealbreaker by any means. This is offset by the fact that Wilds often appear stacked, and fully stacked at that.

The Wild’s positions also change during the Free Spins round, with the round changing to only appear on reels 1, 3, and 5, which is a much better recipe for wins, especially when taking into account how often the Wild symbols likes to randomly appear as a stacked symbol.

Roaming Reels only has one bonus feature, and that’s a Free Spins Round. While we usually prefer games that have several different bonus features, we’re glad that Roaming Reels’ only one is a free spins feature, as this directly adds value to the players’ experience.

Ainsworth Gaming Technology’s Roaming Reels gives players plenty of opportunities to rack up respectable wins with the game’s single bonus feature, though it struggles to keep players engaged or entertained for any significant amount of time. This game isn’t particularly innovative or exciting, and when taking into account the low autospin limit, the terrible audiovisual experience, the low RTP, the high volatility, and the fact that there’s only a single bonus feature, we struggle to find a reason to end this Roaming Reels slot review by encouraging players to try it for themselves.

With so many other slots out there, even in the relatively small African-themed sub-genre, Roaming Reels does a poor job of standing out from the crowd. If you’re looking for a top-notch, African-themed slot, then we recommend taking a look at Thunderkick’s Pink Elephants or WMS’ Raging Rhinos Megaways instead.

🎰What’s the RTP for Roaming Reels by Ainsworth?
Roaming Reels has a relatively low RTP of 94.14%. While this doesn’t look too good when compared to the global slots average, this is pretty par for the course when compared to other slots by Ainsworth Gaming Technology. Players should keep in mind, though, that this is a high volatility slot, so it’s better suited for those players who like to take risks and aim for big wins than for those who like a steady stream of small and medium wins.
⭐Can I get free spins in Ainsworth’s Roaming Reels?
Absolutely! Roaming Reels features a single bonus round, and that’s the Free Spins Round! You start off with between 8 and 20 free spins, depending on how many scattered landed on the reels, and you can even retrigger the feature to earn more free spins from within the Free Spins Round.
🦁What’s the biggest single win I can get in Roaming Reels?
The highest paying single win in Ainsworth’s Roaming Reels online slot game is 1000x your stake. This can only happen if you’re lucky enough to land 5 Tree Scatter symbols on a single payline, and has the added bonus of taking you to the Free Spins Round!