Riches of the Sea Slot Review 2022

Riches of the Sea Slot by 2 By 2 Gaming

Riches of the Sea will show you that there are still many treasures hidden in the deep. This slot is one of the finest games ever released from 2 By 2 Gaming workshop, and it has been a fan favourite since its release in 2013. Riches of the Sea features most of the things a modern casino player can wish for, such as free spins rounds and rich multipliers, so don't miss to give it a closer look.

To learn everything you'll need to know before starting with this exciting slot game, read our Riches of the Sea review, where we take a deep dive into everything it has to offer. 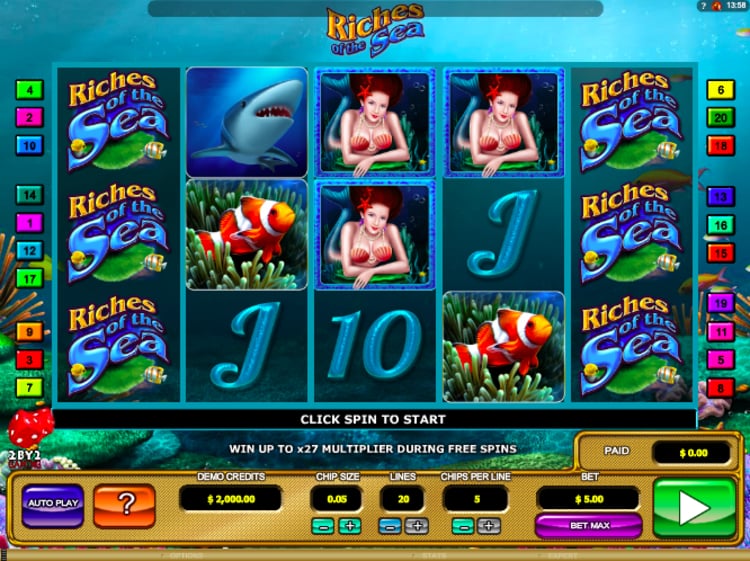 Like many other slots today, Riches of the Sea also follows a classic 5x3 matrix structure. This is probably the most basic setups that even the complete beginners can easily understand. There are 20 paylines, which is a medium to low number when compared with most of their competitors. However, you can set the number of paylines you want to bet and in that way have better control over your spendings.

Most you can stake per spin is £50 over 20 paylines. Min bet is £0.20, so even the players on a budget can set the bet level the way it suits them the best. There is also a very good autoplay option in the Riches of the Sea slot. To start spinning automatically, click on the button in the lower right corner and set the number of auto spins anywhere between 5 and 100. Also, note that you can set it to stop when your balance falls below a certain amount.

Riches of the Sea RTP

Riches of the Sea slot has an RTP of 96% which is perfectly in line with industry standards. It means that in this regard, Riches of the Sea isn't either particularly good or bad. In case you plan to play this slot for a longer time and spin the reels a few thousand times than we recommend you to check out some of the other titles with higher RTP. If you don't know where to find slots with more favourable RTP, take a look at our page about the best online slots in the UK, where we talk more about this subject.

Also, note that Riches of the Sea is a high variance slot. It means that you probably won't hit as many winning paylines as you would with some other slots. But once you do, the winnings should also be above the average. It applies that Riches of the Sea isn't dynamic like most of the low variance slots, meaning that if you want to score some cash or even enter the bonus rounds, you'll have to go through many winless spins.

Graphics and Music in Riches of the Sea Slot

2 By 2 Gaming released this game in 2013, but after just looking at it, you get an impression that it has been made around 2007 or so. The graphics just look outdated and not in line with what we have used to seeing on newer slots. Not that the design is bad, it's actually very decent, with a lot of details and nice colours. Just the whole interface feels like it belongs to the past.

Graphics are a bit pixelated, and the whole interface evokes memories of good old SEGA games. The background is filled with beautiful imagery of the sea bottom, which perfectly compliments the game. As we said, the basic idea is very good, just the final product isn't what we would expect to see in this day and age.

Music in Riches of the Sea slot also feels kind of oldish. It plays only when you spin the reels, and it sounds a bit clunky. But in essence, it's pretty good and nicely complements the surroundings. Sound effects are mostly the usual slot noises, just with a little twist to sound more like a part of some underwater adventure video game. It's a similar thing as with graphics - well-made but outdated.

Riches of the Sea Slot Symbols

All of the high-end symbols here are sea creatures, like sharks and whales, while the lower-paying ones are numbers and card signs. However, 2 By 2 designers did a great job customising the generic symbols to nicely match the overall look of the game. Mermaid is the Wild symbol, and it shows only on reels 2, 3, 4. There is a scatter symbol as well. It's a clam with the word 'scatter' written all over. If you're lucky enough to land at least three of them, both free spins and multipliers will be up for grabs.

Riches of the Sea comes with only one bonus feature. But don't let that disappoint you, it's a really good one! To trigger the bonus round, you'll have to land at least 3 Scatter Symbols. This is how much free spins you can expect once you get enough scatters:

However, during free spins, all card symbols are removed from the game, and if you're lucky enough to get some Wilds, there will even be a sizable multiplier waiting for you. This is how it goes:

As you can see, because all of the wilds and multipliers, this bonus feature can quickly get you hefty payouts. But keep in mind that this is a high volatility slot, meaning that you'll most probably have to spin quite a few times before hitting a winning curve. Also, note that free spins can't be retriggered during this feature.

Riches of the Sea is an overall excellent slot. It has an interesting theme, nice design and an appealing bonus round. The only issue we had was with the fact that graphics and sound effects look a bit dated. If you are a fan of vintage slot games, then go for it, Riches of the Sea wouldn't disappoint you. On the other hand, players who prefer newer titles with crisp animations and vibrant colours should probably look elsewhere. Playing this slot was a lot of fun, so we warmly recommend you to check out some of the 2 By 2 casinos from the list above, and dive deep into Riches of the Sea.

Riches of the Sea FAQs