It’s fair to say that fairytales are a popular theme for slots developers to use in their games. Quickspin Games have contributed to the genre with their Rapunzel’s Tower slot. Rapunzel is the heroine of a tale where she lets a prince use her hair to climb up her tower to see her.  Our heroine’s hair plays a key role in this game’s bonus features, as does her iconic tower.

In this Rapunzel’s Tower slot review you can discover whether Quickspin have created something legendary on the slots scene. 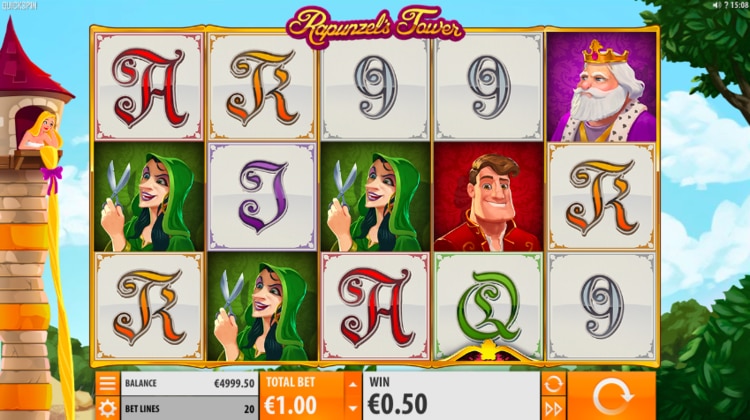 The Rapunzel’s Tower slot is played on a grid with 5 reels and 3 rows with 20 paylines. UK players can usually place a minimum bet of 20p and a maximum of £100, though this may vary according to which online casino you are using. This slot was released in December 2017, and it is an update of an earlier version of the same game that came out in 2013. The original did not use HTML5 technology The updated version does, which means that it can be played on mobile devices of all sizes and types without there being any compromise in quality.

The game does have an autoplay feature if you like to take a more passive role when playing slots. There is also a turboplay button to speed the reels up. You can find both of these buttons in the bottom right of the screen when you are playing the game.

Another feature that is worth knowing about, if you’re trying to put together a strategy to use when playing this game, is that it is medium variance. Smaller wins will come along pretty frequently to keep your bankroll topped up, but you can also expect some big wins now and again, especially if the feature is triggered. We’ll take a closer look at the main feature later on in this Rapunzel’s Tower slot review.

The original Rapunzel’s Tower came out in 2013, and Quickspin asserts in the information about the newer version of the game that its graphics have been given a makeover, especially Rapunzel’s Hair. When we tried the game, we were certainly impressed by the high quality of the cartoon-style graphics. The reels are set in a golden frame, which stands in a forest. You can see some of the trees of the forest to the right of the reels. Although not the most detailed images we have ever seen in a slot, these background details do help to create a bit of atmosphere.

The game’s musical soundtrack is a delicate little tune that is driven by subtle strings and the high notes of a piano. It is actually pretty pleasant to listen to, though it may become a little irritating after a long session of play. You can also hear the sounds of birds cheeping in the background, something that helps to add to the game’s immersive atmosphere. The reels make a very quiet clicking noise as they spin. Everything about this game’s sound design is quite subtle.

A Complete Cast of Characters on the Reels

The game’s lower value symbols are typical range of numbers and letters that you see in almost every other online slot. You’ll see 9, 10, J, Q, K and A rendered in an ornate, regal script in various colours. The higher value symbols are all characters from the fairytale of Rapunzel. So you’ll see a handsome prince, a King and Queen and a wicked witch, complete with scissors to clip Rapunzel’s luscious locks.

There are 2 wild symbols in the game, both of which feature Rapunzel herself. One shows her golden locks of hair and one shows her face. The wild with her face on can appear stacked and will replace all other symbols to create winning combinations apart from the game’s scatter symbol. It will also pay out 35x your stake if 5 of it appear on a payline. The wild with the hair is a bonus wild and this can only appear on reels 2, 3 and 4. This wild triggers a special extra feature. The scatter symbol is the tower and this will trigger the free spins bonus. We’ll look at both of the features next.

Wild Respins and a Climbing Prince

There are 2 bonus features in the game. One revolves around the bonus wild symbol and the other is triggered by the tower scatter symbol.

While not the most complex of bonus features, both of these additional games give plenty of chances to win big prizes, and can soon become very lucrative indeed if you manage to enjoy a bit of luck. We particularly enjoyed the addition of the prince climbing the tower. While there was no actual gaming skill involved in his climb, it certainly added another layer of entertainment and excitement to watch him make his ascent and wonder what prizes he might bring.

We enjoyed playing Rapunzel’s Tower. Although it is not the most complex or intriguing game that we have ever played, it certainly held our attention. We particularly enjoyed the prince climbing the tower as part of the free spins bonus feature. The game’s sound effects and music also impressed us to a much greater level than we normally are by the audio design of a slot. So this Rapunzel’s Tower slot review will conclude on a very positive note by recommending that you give this game a spin the next time you have the opportunity.

If you enjoy it, you might want to try out some other fairytale themed slots. Quickspin’s Big Bad Wolf is well worth a look, as is Jack and the Beanstalk from Net Entertainment.

👸What is the major difference between the 2013 version of Rapunzel’s Tower and the 2017 version?
The 2017 version looks slicker and smoother, especially when played on a mobile device. The improvement in mobile gaming quality over the original game is due to Quickspin remodelling the game using HTML5 technology. HTML5 improves the overall experience of the game for mobile players by allowing the developers to use more detailed graphics and more immersive sound. We have to say we are glad that Quickspin chose to revamp this game!
💎What is the most valuable symbol in the Rapunzel’s Tower slot?
The most lucrative symbol that can appear on the reels in this game is the wild symbol that shows Rapunzel’s face. If 5 of these symbols appear on a payline then you will receive a prize worth 35x your stake. You can discover the worth of all the symbols in the game by looking at its paytable. This is found by clicking on the small symbol with horizontal lines in at, located in the bottom left of the screen.
💰Can I use a casino bonus offer to play the Rapunzel’s Tower slot?
Yes, if you can find an online casino that is offering you a welcome bonus, and it features Quickspin slots, then you should be able to use your bonus credit to play on the Rapunzel’s Tower slot. One thing you might need to check is how much this slot contributes to the wagering requirements of the bonus. Most slots count 100% towards meeting the requirements, though.