5.0
/5
888 Casino
No Deposit Bonus
£88
Deposit Bonus
100% up to £100
CLAIM
No Deposit Offer: New players only • £88 is granted in FreePlay (FP) • FP must be claimed within 48 hrs of receiving the email and expires after 14 days • FP wins are credited as bonus and capped at £15, exc. JP win General withdrawal restrictions & full T&Cs apply: No Deposit Offer terms. Full T&Cs Here
Details
No Deposit Bonus

If you’re a seasoned slots veteran then the chances are good that you have already played one of Barcrest’s Rainbow Riches series of slots, or at least heard of them. This slots dynasty has been around for a while now, with several sequels and variations appearing. This one uses the famous  Megaways concept to boost your chances of winning big prizes.

In this Rainbow Riches Megaways slot review, we’ll take a closer look at this entry in the iconic series of games, and see whether or not it contributes anything to the legacy of a well-respected brand name. 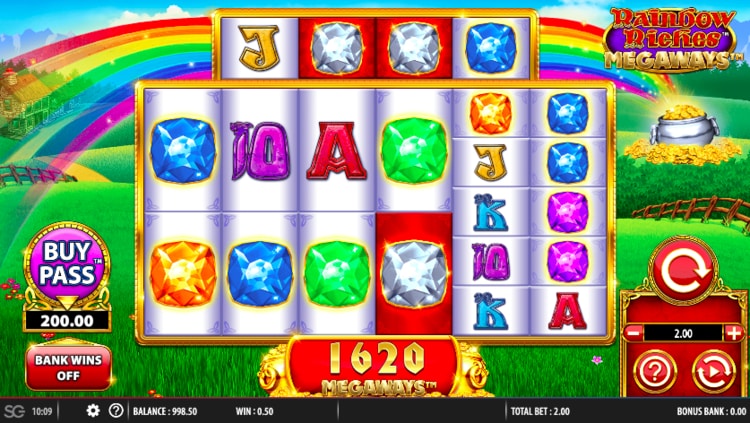 This game is played on a grid with 6 reels and 6 or 7 rows. There are a massive potential 117640 ways to win, thanks to the Megaways concept. The key idea behind this concept is that wins can trigger yet more wins, but we’ll give you more details about that later on. The size of bet that you can place as a UK player ranges from 5p to £400.

There is an autoplay button you can use to take a more passive approach to things. You can set this to work for a certain number of spins, ranging from 5 to 100, or when a win of a certain size spins in. The game uses HTML5 technology. This makes it ideal for playing on a wide range of mobile devices without there being any reduction in the quality of its graphics or sound effects. Barcrest released the game in July 2015.

If you’re more the kind of slots player who takes an interest in the volatility of a slot, then you should know that this game is a medium volatility game. This means that you should expect to pick up a big win on a fairly regular basis, as well as pretty frequent small wins.

A Sunny Day in Ireland

The game’s reels are set on a golden frame that hangs in front of a stereotypical Irish countryside scene. We do wonder how many slots designers have actually visited Ireland on occasion, given how the country seems to be depicted in many games. But you’ll see the usual set of clichés deployed here, rich green fields, a pot of gold at the end of a vivid rainbow, a cottage, and all overseen by a pale blue summer sky and a bright yellow sun.

The animation is very slick and smooth, with the symbols sliding around the grid. The rainbow at the top of the screen also adds more animation and colour to things. When it comes to sound, the game has a slightly over-enthusiastic feel to it. The music is very jolly and matches the cartoon Irish theme. It also becomes unlistenable within seconds of the game starts, so we strongly recommend using the mute button to prevent yourself from going crazy. That aside, there are some nice ambient sounds such as birdsong in the game, but the music does tend to overpower them somewhat.

Look for the Silver Horseshoes

The symbols used on the reels fit in with the game’s theme of Irish luck. You will see the number 10, as well as the letters J, Q, K and A used as lower value symbols. The higher value symbols are gemstones, with blue, purple, white, orange and green used as colours. The game’s wild symbols is a silver horseshoe, and this will replace all other symbols to form winning combinations for you.

You also need to watch out for the multicoloured Super Gem symbol, which can only appear on the horizontal reel above the main set of reels. This reel looks more like a row, but it adds to the number of possible ways to win and spins when the reels do. The pot of gold is the scatter symbol and this plays a key role in the game’s bonus feature, which is something we’ll take a closer look at next.

In addition to the bonus features that we are about to describe here, it is also important to know a little bit about the Megaways concept that the game uses. What happens with this is that every time a win slides into place on the reels, the symbols that formed that win will disappear. They are then replaced by new symbols. If a new win is formed then the process repeats until no more wins occur. This can sometimes lead to a very lucrative passage of play, if you manage to enjoy a bit of luck.

Here are the other two bonus features in the Rainbow Riches Megaways slot:

We enjoyed the free spins in this game as there were plenty of extra modifiers to really increase the size of the prizes on offer. The Super Gem is also a nice touch, and the Megaways concept really can add some significant value to any prizes that you manage to pick up.

Verdict: A Touch of Magic

This Rainbow Riches Megaways slot review ends with us saying that we enjoyed this game, and particularly enjoyed the way that the Megaways concept was deployed. We found that big wins soon started to stack up when we got going and really got stuck into the action. While this game offers a slightly different slot experience other games in the Rainbow Riches series, such as Rainbow Riches Free Spins, we really enjoyed it. We do wish someone would compose some listenable music for these games, though!

If you fancy trying some other Irish themed slots, apart from Rainbow Riches, games, have a look at Leprechaun’s Luck from Microgaming, or possibly Irish Eyes from NextGen.