According to slots developers, Ireland is a country of leprechauns, rainbows and endless pots of gold, as well as plenty of luck. While the inhabitants of Ireland might disagree with that portrayal, Barcrest clearly loves it, as they have produced several slots that use Irish luck as a theme.

This Rainbow Riches Free Spins slot review will take a closer look at one of those games. You can find out whether this Barcrest game offers pots of gold and rainbows, or just recycles old slots clichés if you read on. 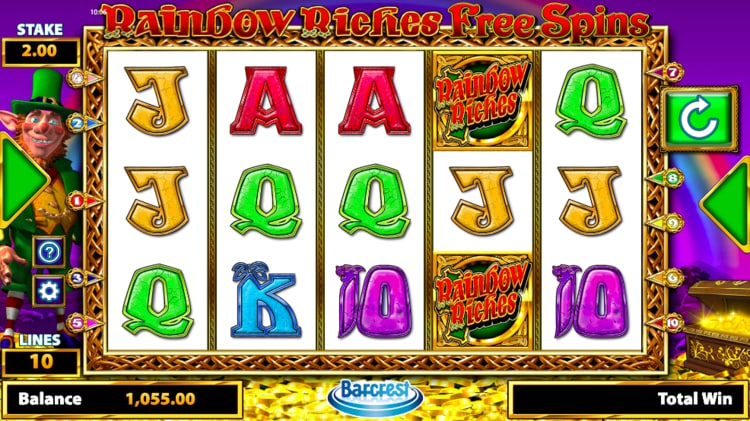 The Rainbow Riches Free Spins slot is played on a grid of 5 reels and 3 rows, with 10 paylines. The game works really well on a diverse range of mobile devices, thanks to the use of HTML5 technology. For UK players, the minimum bet is 10p per spin and the maximum is £100. An autoplay feature is included if you like to take a more passive approach to your slots gaming. The slot was released by Barcrest in February 2017.

What is the Rainbow Riches Free Spins Slot RTP?

Of course, if you are a seasoned slots gamer then you will know that basing your tactical approach on RTP can be risky. It might be more useful to you to know that this slot has a medium variance. This means that your chances of picking up infrequent large wins should be roughly the same as collecting frequent smaller wins.

We have to say that we found this game looked quite ugly at times. There is a brash and slightly harsh quality to the graphics in this slot. The red-haired and red-faced leprechaun who stands to grin at the side of the reels is not a particularly welcoming figure. The screen also looks quite cluttered at times.

The reels are adorned with a golden frame and stand in front of a purple background. You can see a rainbow and a treasure chest to the right of the reels. You control the game’s settings and access information like the paytable by using the tabs on each side of the reels. This gives the game really good functionality and is the slickest thing about its design.

When it comes to how the game sounds, it’s a mixed bag. The leprechaun says, “Here we go!” just before the action begins. The line is delivered in a cartoon approximation of an Irish accent, which might grate with some people. It certainly fits the theme of the game, though. Sound effects are somewhat limited in scope to noises that play when events occur on the reels. They don’t really create much of an immersive atmosphere, but they do the job.

You won’t see a wide variety of symbols used on the reels in this game, either. There are the usual letters and numbers that slots developers favour, with A, K, Q, J and 10 all used. The Rainbow Riches logo is one of the higher value symbols, and the other is the game’s wild symbol, which is a 4-leaved clover. Other than that, there are no other symbols used, something that highlights the very basic approach that Barcrest have taken to the design of the Rainbow Riches Free Spins slot game.

The wild symbol will substitute for all other symbols to create winning combinations, apart from the bonus symbol, which is a rainbow. The bonus symbol is also wild, which can boost your chances of picking up wins. It also plays a vital role in triggering the bonus feature, and can only appear on reels 1, 3 and 5. Barcrest like to take a traditional approach to the design of the symbols in their slots, so the limited range of symbols on offer should not surprise anyone who has played their games before.

Overall, this games looks garish and a little bit dated, at least in terms of it graphics. It does play very smoothly, though. We’ll take a look at how its bonus feature works in the next section of this Rainbow Riches Free Spins slot review.

As Expected, the Bonus Feature is Free Spins

There really is not much else to say about the bonus feature in this game. The slot’s title really tells you all you need to know. While it can feel a little disappointing to have such a simple feature, it is actually part of the game’s charm. Anyone who has played any of the other Rainbow Riches games knows what to expect, and if you like your slots simple you’ll find plenty of entertainment in this game.

A Simple Game with Plenty of Free Spins

This Rainbow Riches Free Spins slot review will conclude by saying that while we were not overly impressed with this game, it still has plenty to offer. While the game does not look and sound particularly great, it does play efficiently and smoothly. The feature is limited in scope, but you can benefit from up to 999 free spins if you’re lucky, so there are plenty of opportunities to win big.

If you like playing slots with a theme based around Irish luck then you might want to have a look at the other titles in the Rainbow Riches series of slots. Alternatively, have a look at Lucky Leprechaun from Microgaming, or Luck o’the Irish Fortune Spins from Blueprint Gaming.

🎰What are the other games in the Rainbow Riches series?
PAs well as the original Rainbow Riches slot, and this Free Spins version, you can also play Rainbow Riches Drops of Gold, which features 200 paylines. Rainbow Riches Home Sweet Home has an intriguing Knock Knock bonus as well as 50 winlines. Other games in the series include Rainbow Riches Pick’n’Mix, Rainbow Riches Leprechan’s Gold and Rainbow Riches Reels of Gold. Check our list of Barcrest casinos to see where you can play these exciting games!
🎰Why does the Rainbow Riches series of slots use Ireland and leprechauns as its theme?
The Rainbow Riches series of slots uses this theme because Ireland is associated with good luck, thanks to the expression ‘the luck of the Irish’. This saying is believed to date back to the early 19th century in the USA. Many Irish immigrants to America were drawn there by the gold rushes. Many Irish miners found large gold strikes, so the saying was born. Although initially derogatory, it has come to mean something much more positive in the present day.
🎰How do I find out what each symbol is worth in the Rainbow Riches Free Spins slot?
There is a handy I tab on the screen when you play the game. If you click this then you can access all kinds of useful information about the game. Not only will you see the game’s pay table, which tells gives you the relative value of each symbol on the reels, but you can also see how the game’s paylines are structured.