Raging Rhino sounds, we’re sure you’ll agree, like yet another one of the many clichéd safari slots out there. We think that it offers something a little different, though, and you can certainly pick up plenty of free spins. This title is WMS Gaming’s contribution to a popular genre of slots.

This Raging Rhino slot review will tell you all about the game. We will show you whether WMS has made a success of this savannah safari or not. Read on to find out more! 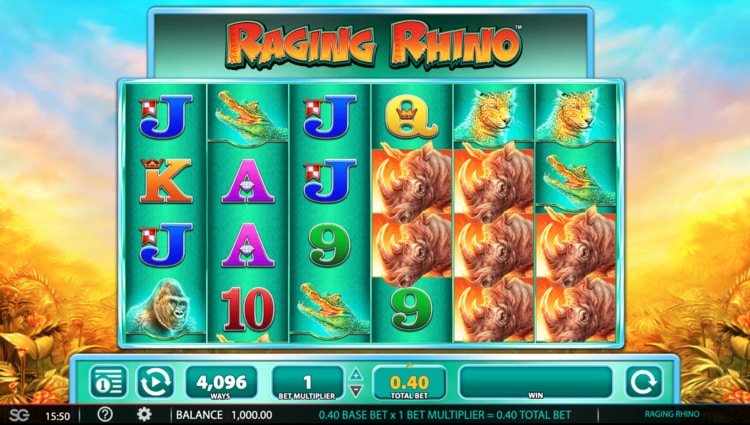 The Raging Rhino slot is played on a grid of 6 reels and 4 rows. There are 4096 ways to win. The game does not have a conventional payline structure. Instead, it uses Any Way pays. This means that matching symbols on adjacent reels give you wins.

The minimum bet size that you can place is 40p and the maximum is £120, though this may vary slightly depending upon which casino you are using. There is an autoplay function, and you can set this to run for a certain number of spins.

The Raging Rhino slot RTP is 95.91%, which is just about typical for a game of this type, though perhaps a little low. Other WMS Gaming slots with a similar RTP include Egyptian Riches (95.99%), Friends (96.00%) and Queen of the Wild (94.99%). WMS slots vary quite considerably in the RTP levels otherwise, though.

The Raging Rhino slot has medium to high variance, so you need to buckle in for a few thrills and spills as you wait for the big wins to come along. The game looks and sounds just as good on mobile as on your desktop device. That is because of its use of HTML5 technology. It was released by WMS in 2015.

Listen to the Call of the Wild in Raging Rhino

The reels in the Raging Rhino slot are set in front of a pretty nondescript savannah scene. There is vague, yellowish hint of African undergrowth beneath an azure sky. There is not much detail to immerse you in the world of the game. The reels are rendered in an aquamarine colour which at least helps the symbols to stand out.

In terms of sound, the Raging Rhino slot starts with a rhino’s call. This harsh bark of noise certainly helps to set the scene. Other animal noises are heard as the action starts. Monkeys call, there are bird noises and keen-eared wildlife enthusiasts will be sure to be able to identify some of the other sounds.

A funky African themed musical soundtrack plays as the reels spin. Retro sound effects play when you record a win. These are reminiscent of the sound effects from cabinet-based games in the 1980s. This is not surprising as WMS make games for real life casinos too.

Spot the Wildlife for Big Wins

The symbols on the reels in the Raging Rhino slot, as you might expect, consist largely of African animals. The images are detailed without being particularly sharp or impressive. They certainly do their job, though. The higher value symbols are animals. You will see a mongoose, a crocodile, a cheetah, a baboon and, of course, a rhino. The lower value symbols are the usual range of letters and numbers associated with playing card values.

There are 2 special symbols to watch out for in the Raging Rhino slot too. The wild symbol is a setting sun that silhouettes a tree. It can only appear on reels 2,3, 4 and 5. This can substitute for all other symbols to create new winning combinations for you, apart from the scatter. The scatter symbol is the shining diamond and this plays a crucial role in the game’s bonus feature, which is something we’ll look at next.

There is only one bonus feature in the Raging Rhino slot. This is a free spins feature. It can be lucrative and very exciting, though, if you enjoy a bit of luck. You trigger the feature by spinning in at least 3 of the diamond scatter symbols. The number of free spins that you receive depends on the number of diamonds that appear on the reels. The amount breaks down as follows:

When max pays are in place in the Raging Rhino online slot, the free spins feature is guaranteed to give you a win of at least 10x your total bet. If the feature ends with you having won less than this, your total win will be boosted to 10x after the free spins are over.

This Raging Rhino slot review concludes on a positive note. While the graphics are not the most detailed we have seen, this game still has lots to offer. The free spins feature can be very generous, both in terms of the number of spins on offer as well as the prizes you can win. We also have to give the animal sound effects some credit. They help to create an immersive atmosphere for the slot. We recommend that you try the Raging Rhino slot today!

If you enjoy wildlife-themed slots then you might also want to try the iconic Mega Moolah slot from Microgaming, Gorilla from Novomatic or possibly Cash Camel from iSoftBet.

Can I retrigger the free spins feature in Raging Rhino?
Yes, you can retrigger the free spins feature in the Raging Rhino slot. If 2 or more of the diamond scatter symbols appear on the reels during the free spins bonus feature then you are in line for more free spins. There is really no upper limit on how many times this can happen. You could be in line for dozens and dozens of spins if you’re really lucky. As ever, though, with slots, remember that the RNG determines outcomes.
Does the Raging Rhino slot use the Megaways concept?
While the Raging Rhino slot has a slightly unusual payline structure, it does not use the Megaways concept. Its sequel does, however. The Raging Rhino Megaways slot is a sequel to the original game. It offers 117,649 ways to win and is essentially a reboot of the original game. It has many of the same aspects for you to enjoy. If you want to find out where to play it, you can consult our list of casinos that feature WMS Gaming slots here at this website.
Can the diamond scatter symbol generate a win in its own right on a payline in the Raging Rhino slot?
Yes it can. As well as playing a crucial role in the free spins feature, the diamond symbol is worth plenty in its own right. If 6 of this symbol appear on a payline then you will win a prize worth 400x your stake. For 5 of it, you’ll get 20x your stake, for 4 it’s 4x and for 3 it’s 0.8x. Of course, it’s mainly useful for triggering the free spins, but it can certainly bring you some lucrative winnings in its own right too.