Enter an ancient pyramid and start a face-paced megaways adventure with Big Time Gaming's Queen of Riches slot. This sharp looking Egyptian game comes with a few nice bonuses, such as the Reel Clone Feature and Full Reel Wilds that can also get you up to 7x multiplier. These bonuses can trigger on any spin in the base game, which in combination with megaways mechanics makes this slot super dynamic and engaging. In case you want to learn more about this BTG title, check out our Queen of Riches slot review where we discuss everything you should know before starting to play. 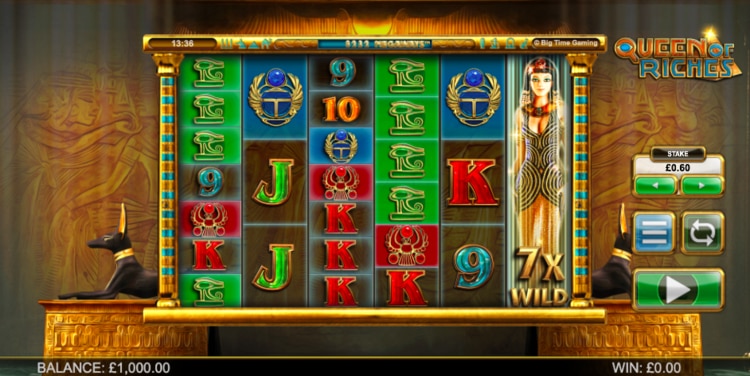 Queen of Riches comes with 6 reels, but because of the megaways mechanics, each reel can hold between 2 and 7 symbols. Set up like this leaves room for many more ways to win, which in this case is staggering 117,649 paylines. Feel free to play this slot on both desktop computers, smartphones or tablets, regardless of the operating system they use. But in case you want to give it a try on a small screen, make sure you switch the device to portrait mode, so you can fully enjoy the richness of huge megaways reels.

One of the things we didn't like about this BTG slot is the very modest bet range. You can start with the usual £0.20 per spin, but the maximum limit is set at just £10. That is way below the average, so in case you like to spice things up, we recommend you to take a look at some other games with more flexible bet limits. The designers also included an autoplay option, which allows you to set up to 100 auto spins, as well as loss and single win limits.

Queen of Riches RTP and Variance

Queen of Riches is quite above the average with an RTP of 96.9%. We believe that this will be enough to please both casual and more demanding slot players. On the other hand, it also comes with a high variance. It implies that there won't be that many smaller wins, but once you start piling up those cloned reels and full reel wilds, the waiting can quickly pay off.

This Big Time Gaming slot comes with super detailed graphics and sharp artwork. However, it somehow feels a bit dated. Don't get us wrong, Queen of Riches is still a great looking slot, but you can tell it was released around 5 years ago just by looking at it.

The action happens inside of an ancient pyramid which is decorated with rich Egyptian styled ornaments and two golden sarcophagi laying on the side of the reels. The reels are also golden and have hieroglyphics inscriptions all over them, as well a meter that shows how many megaways is active at a given turn.

The quirky slot music will play only when you hit the 'spin' button. However, it's very high pitched and noisy, so some players may wish to go for the 'mute' option after just a couple of spins. There are literally numerous Egyptian-themed slots out there, yet Queen of the Riches manages to stick out with its sharp design and swift gameplay. In case you want to explore some other similar slots, we suggest you start with the Cygnus slot from ELK or Cleopatra from IGT.

All of the most lucrative symbols are items from Egyptian culture and mythology. You'll find scarab and eagle-shaped amulets, the eye of the Horus and a pyramid, which is the highest paying symbol in the game. If you manage to land 6 pyramids in a single spin, there will be a prize of 30x your stake waiting for you. Rest of the paytable is filled with lower-paying card symbols and numbers.

There is no scatter symbol in this game, while the Wild shows up only in the form of the Full Reel Wild that looks like an animated Queen of Riches herself.

The Queen of Riches slot comes with two bonus features. There is no separate bonus round, meaning that both of these features are happening in the base game. We will take a closer look at both of them in the following sections.

The Wild in this game is the Queen of Riches Full Reel Wild symbol which can substitute for any other symbol in the game to complete a winning payline. It also comes with an up to 7x multiplier attached to it. However, the best part is that you can get more than one Full Reel Wild in a single spin, and in that case, the multipliers will multiply each other. So, if you're lucky enough to get two 7x Full Reel Wilds, you'll end up with a 49x multiplier for that turn. Note that these Wilds appear only on the reels 2 to 6.

This feature is active on every spin and can randomly make between 2 and 6 reels to have completely the same set of symbols. The most important thing you should know about this bonus is that it can clone the Full Wild Reel as well. So, you can potentially end up with up to 5 Full Wild Reels on any spin, which will result in big wins.

Queen of Riches Isn't that Rich After All

Big Time Gaming did a great job with this slot. It's snappy and full of action, so testing it was a real pleasure. However, we can't get around the fact that they have included almost no real bonus features. The Full Reel Wilds with multipliers and the Reel Clone Feature complement each other nicely, making the game extremely volatile. But, we are still missing some free spins round or a jackpot bonus game. Because of all this, you probably won't want to commit to Queen of Riches long term. Nevertheless, you should give it a try - it's really fun to play game, especially if you like Megaways slots.