Sail the seas with the band of pirates and collect their treasures along the way with the Pragmatic Play's Pirate Gold slot. This game is packed with two highly rewarding bonus rounds, which includes free spins, multipliers, respins and even 3 jackpots. Besides all of the attractive bonus features, the biggest upside of this slot is its mesmerising design and smooth gameplay that will charm even the most seasoned casino lovers.

To learn everything there is to know about this popular Pragmatic Play slot, read our Pirate Gold slot review, where we discuss everything from RTP and volatility to jackpots and free spins mechanics. 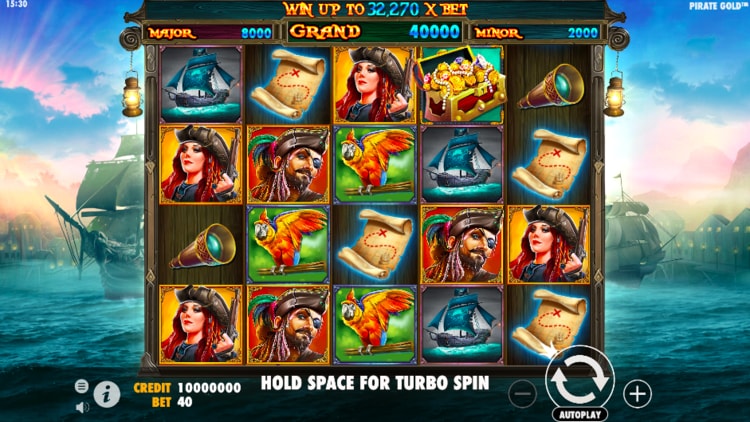 This slot is played on the 5x4 matrix, which is a bit bigger than the industry average. It comes with a solid number of 40 ways to win, but note that there isn't an option to manually change the number of active paylines, meaning that you'll always have to bet all of them.

In case you don't want to waste time by repeatedly pressing the 'spin' button, note that there is an advanced autoplay feature included. Not only that you can set between 10 and 100 automated spins, but there is also an option to programme it to stop when you win or lose a certain amount of money.

When it comes to the stake level, Pirate Gold slot is more suited for players who like to bet big. The minimal amount you can place per spin is £0.40, which is more than we have used to seeing. On the other side, high-rollers can rejoice since the max limit is £200. In case you're one of the people who like to wager on the go, note that the Pirate Gold looks equally stunning on both phones and tablets.

With RTP of 96.5%, we are safe to say that Pirate Gold slot is a great choice even if you're planning to spin for a longer time. There are slots which are even more favourable, but for the majority of players, this one will do just fine.

Pirate Gold comes with very high variance, meaning that you won't score that many wins, but at the same time, the big payouts are also more likely to happen. This is because there are a couple of highly rewarding bonus rounds in this slot, so if you're lucky enough to enter any of them, all of the empty spins could quickly pay off.

Pirate Gold Comes with Mesmerising Graphic and a Melodic Soundtrack

Pirate Gold is without any doubt one of the most visually appealing slots to ever come out of the Pragmatic Play workshop. This game is simply gorgeous. Wooden reels look a part of the old pirate ship, with lanterns hanging on the side and lots of small details.

We know that Pragmatic Play always tries to make the background of their slots look as good as possible, but with the Pirate Gold, they've hit the jackpot. Here you'll see an old harbour and a restless see swinging the pirate ships. The animations look very lively, almost like you're looking at the live recording of the ocean. The only thing we would like to see redesigned is the game interface with buttons and commands, but apart from that everything else is first-class.

Pragmatic also did a great job when picking a soundtrack for this game. The music sounds like something that came out of Pirates of the Caribbean, which perfectly adds up to the atmosphere of the game.

There are also some customised slot sounds when you start spinning, as well as noises of the sea waves and sword fights, so everything you would expect to hear on a pirate ship. This slot is easily one of the best pirate-themed casino games and a close match to other popular titles like Pirate's Charm by Quickspin or Ghost Pirates by NetEnt.

Symbols follow the same design as the rest of the game, so you won't be disappointed with what's spinning on the reels. The great thing is that all elements are custom designed for this slot, meaning that there are no generic card signs or numbers. You'll see lots of pirate-themed items included like old coins, treasure maps, ships and hooks.

Highest paying symbols are Male and Female Pirates, which are also wilds in one of the bonus games, but more on that later. Other special signs are Treasure Chest which is a Wild in the base game and Compass Bonus Symbol that triggers free spins. There is also a special Money Symbol. We will talk about it further below when we come to the Lucky Treasure Bag Feature.

Pirate Gold slot comes with two bonus rounds. One of them includes free spins, while the other can lead you to cash prizes or one of the 3 jackpots. We'll discuss both of them in the following paragraphs.

To start the free spins round, you'll have to land 3 Compass Bonus Symbols, which can show up only on the reels 2, 3 and 4. The feature awards you 10 free spins. But the best part about this round is that Male and Female Pirates Symbols transform into the wilds on the reels 2, 3, 4 or 5, granting you much higher chances to score a winning payline. Also note that if you get 3 more Compass Bonus Symbols during the free game, you'll retrigger 10 additional bonus spins.

Treasure Bag Money Symbols appear with different cash values on them. They can also have Minor and Major jackpots attached, that award 50x and 200x your stake respectively. Each time you get at least 8 Treasure Bags in the base game, Lucky Treasure Bag Feature will start. In his round, only symbols to appear on the reels are Money Symbol, Retrigger Symbol, Multiplier Symbol and empty space.

You start the bonus round with 3 respins. Every time there is a Money Symbol, the respin counter resets back to 3, and that symbol stays in place until the end of the round.

Multiplier Symbol is a money bag with multiplier value written on it. You can randomly get a 2x, 3x or 5x multiplier on every turn, which at the end boost the total amount you won. Every additional multiplier is stacked with the previous ones.

Retrigger Symbol is a chest. Every time one of them shows up on the reels, you'll get one more respin.

The round is over when you run out of respins. In the end, all the prizes written on money bags will be added together and boosted by the total multiplier to form your final award. If you manage to fill all the spots on the reels with Money Bag Symbols, you'll also win the Grand Jackpot, which is the most valuable single prize in the Pirate Gold slot that grants 1000x your total stake. Also, note that Lucky Treasure Bag Feature can be triggered even during the free spins round.

We have only good things to say about the Pirate Gold slot. It looks and feels premium, with lots of animations, detailed graphics and engaging soundtrack. There are plenty of bonus rounds and even a massive jackpot prize. The only potential problem is that some players may find the main bonus round a bit complicated, so we wouldn't recommend this slot for complete beginners. But everyone else should definitely go for an adventure with Pirate Gold.