We can probably all agree that basing a slot on the work of the medieval doctor and prophet Nostradamus is a probably a little strange. Ash Gaming decided that it was worth a shot anyway, and have produced Nostradamus Prophecy. This is a 5-reel slot with 243 ways to win. It is based on the life of the French doctor who foretold the future.

Does it deliver the kind of excitement that you would expect from a medieval magician? Our Nostradamus Prophecy slot review will tell you that and much more! 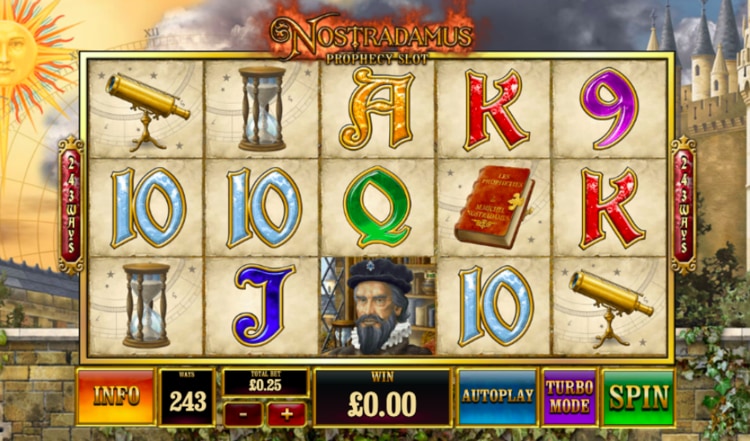 The Nostradamus Prophecy slot has 5 reels, 3 rows and 243 ways to win. There are no conventional paylines on the grid. Instead, wins are recorded by you spinning in adjacent symbols running from left to right. The game can be played on mobile devices. The bet levels in the game range from 25p up to £125. The maximum amount that that you can win is 555x your bet. This may vary between operators, though, so always check if you are unsure.

You can change your bet levels very easily by using the tabs at the bottom of the screen, all of which are very clearly labelled. There is an autoplay button if you want to watch the action on the reels unfold before you. This may be a good option if you possess the prophecy skills of Nostradamus to predict what is going to happen!

The RTP of the Nostradamus Prophecy slot is given as between 94.00% and 94.07%. That is a little on the low side for a slot of this type. It is not an untypical rate for games from this particular developer, however. Other Ash Gaming slots with a similar RTP level include Coffin up the Cash (93.80%), Flutter Pays (94.00%) and Hawaiian Treasure (93.99%).

The variance of the slot seems to be about medium, based on our experience of playing the game. There certainly seemed to be a good balance between picking up smaller wins on a frequent basis and the feature being triggered to bring in bigger wins. Nostradamus Prophecy was released in July 2013. It has been around for almost seven years at the time of writing.

Step back in Time to See the Future

The game’s title ‘Nostradamus Prophecy’ is emblazoned in fiery letters on top of the reels, giving the game’s hero a kind of dramatic mystical status. The screen is dominated by yellow shades that recall the colour of old parchment. This looks like the kind of stuff on which old Nostradamus might well have scrawled his quatrains.

A walled castle stands in the background behind the reels. There is a stylised depiction of the sun in the screen’s to left corner, rendered so that it mimics the imagery used in medieval alchemical texts.

A dramatic classical theme plays before the action starts in Nostradamus Prophecy slot. It’s quite pleasant, though can become a little repetitive. The sound effects during gameplay are unobtrusive. They consist of the usual type of whirrs and clicks that tend to accompany reel spins in slots. They are effective enough. Little musical flourishes play when you record a win on the reels.

See Through the Prophet’s Telescope

The lower value symbols on the reels in Nostradamus Prophecy slot are the usual range of numbers and letters associated with playing card values. They are rendered in a medieval type script. The higher value symbols are all items related to Nostradamus and his life of prediction. They are fairly detailed and we were impressed with their quality. You’ll see a spell book, a telescope, the solar system, an hour glass and a scroll on the reels.

The eclipsed moon is the game’s wild symbol, and this can substitute for all other symbols to create winning combinations for you, apart from the scatter. The scatter symbol is the globe and this plays a key role in the free spins bonus feature. This is something we’ll look at in our next section of this Nostradamus Prophecy slot review.

When it comes to bonus features, the Nostradamus Prophecy slot game is packed with entertainment. We’ll take a closer look at each one of the slot’s features here. There’s plenty to get your teeth into!

While the reels are spinning, a scroll will sometimes appear on the screen in Nostradamus Prophecy slot. When it unfurls it will reveal one of 3 possible rewards for you. These are:

You can only activate this bonus in Nostradamus Prophecy slot if you are playing for stakes of £5 or greater. Each time a win spins in with the book symbols, you will receive an additional cash prize.

The planet symbols in Nostradamus Prophecy slot can only appear on reels 1, 3 and 5. If they do appear, though, then you will trigger this feature. The screen changes to reveal the solar system, with the planets orbiting the sun. Each planet moves at a different speed. When the planets stop moving, 1 or more of them will land on a winning line. Each planet on the line will increase the value of the multiplier prize you receive.

The globe symbols are the key to triggering Nostradamus Prophecy’s main bonus feature. The number of free spins that you receive depends on the number of globes that appear on the reels. That breaks down as follows:

The reel modifiers are additional bonuses in Nostradamus Prophecy slot that remain active for 5 of the free spins that you are awarded. There are 3 possible types of modifier than can be applied. These are:

We have to say that we really like the Nostradamus Prophecy slot. The graphics were impressively understated, and the gameplay was very smooth and slick. We particularly enjoyed the depth and diversity of the game’s bonus features.

These added several layers of entertainment to things. So this Nostradamus Prophecy slot review ends on a really positive note – but maybe you could have predicted that? We suspect that Nostradamus himself would have done.

If you enjoy games based on esoteric figures from history or magic, you might also want to try Rise of Merlin from Play’N GO, or possibly Alchymedes from Yggdrasil.