North Storm is one of the Rabcat's latest releases which have shown us once again that this provider hasn't lost it's touch when it comes to the game design. Apart from captivating looks, this slot also offers a couple of interesting features such as Free Spins symbol, multipliers and special Bonus Fall feature. It's all well composed to make this game even more dynamic and action-packed than we first thought it would be.

If you want to learn more about this Rabcat slot, don't miss to take a look at our North Storm review. Here we reveal everything you'll need to know, from RTP and volatility to bonuses and special symbols. 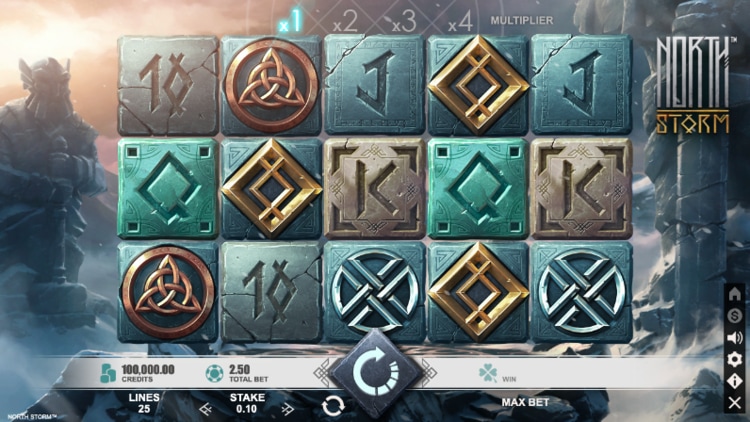 Rabcat has decided to go with a usual 5x3 set up we have already seen so many times before, meaning that even the complete beginners will find this slot very easy to follow. There are 25 paylines, but we haven't found an option to set that number any lower, so you'll always have to bet all 25. When it comes to the bet size, North Storm slot is again somewhere around the industry average. Least amount you can stake is £0.25, while the maximum bet is £50. This is a decent bet range that should be enough to satisfy both high rollers and players on the budget.

Designers included an autoplay option as well. It's located just on the right side of the 'spin' button, and it allows you to select up to 100 auto spins, but nothing more than that. You can also turn on a 'quickspin' option in the game settings, in case you want to speed things up.

North Storm has an RTP of 96.13%, which is barely over an industry average of 96%. It means that we can consider this slot as suitable for long term playing, but note that there are many much more favourable slots available out there. If you're a fan of Rabcat games, Castle Builder would be a much better choice for playing over a longer period of time, since it has RTP of up to 97.5%. However, this only applies to players who want to play at least a few thousands of spins, because if you're going to play any less than that, RTP wouldn't have much impact.

Another thing you should know is that North Storm is a medium volatility slot. It means that it stands somewhere in between games that give a small number of large wins and the ones with a huge number of tiny wins. So, when playing North Storm, you can expect nice payouts to come fairly often, which makes this game dynamic and highly rewarding at the same time.

This game may be average in terms of general features, but when it comes to the design and music, it's well above almost any slot we have reviewed in recent times. Rabcat is truly a master of its craft, and they prove it once again with North Storm slot. As soon as you open the game, you'll see a crisp graphic, full of vibrant colours and detailed animations.

Everything looks like its made of stone and steel, while the background resembles a mountain top full of old Norse gods statues. You can see snowflakes falling all over the reels, which in combination with wind-howling sound effects will almost make you feel on your fingertips how cold that stone-made 'spin' button really is.

As we just mentioned, music effects perfectly complement the overall atmosphere. Apart from the fearsome north winds, you'll also hear quiet, mysterious music and voices chanting in the somewhere background. Also, when the reels stop, there will be crashing sounds of stone symbols hitting each other.

North Storm looks good, sound good and feels good, so we're safe to say that most of the players will give it a thumbs up. It somehow resembles NetEnt's Asgardian Stones slots, both in design and game mechanics. So if you already enjoyed that game, there's no reason not to give North Storm a try.

All the symbols in North Storm perfectly match the surroundings. They look like very detailed stones with metal talismans pined to them. Lower value symbols are usual K, Q, J, 10, but they look like carved in stones, which perfectly matches the overall design of the game.

There is a wolf Wild symbol that replaces every other symbol to form a winning payline. However, this slot doesn't have a scatter sign, but instead, it features a Free Spins Symbol. It's clear what that symbol does, and to learn more about its mechanics, check out the following paragraphs.

North Storm has a couple of interesting bonus features, but we must warn you, it's much less packet with special rounds than some other Rabcat slots. For example, if you like this provider, but you also want to enjoy an array of innovative bonus rounds, then maybe Castle Builder II would be a better choice.

However, North Storm slot may not have complex bonuses, but it's all built in a way to make this game very actionable and dynamic. We will list and explain all the bonus feature below.

This is a free spins feature of the North Storm slot, and to trigger it, you'll need at least 3 Free Spins Symbols. The first time it happens, it will grant you 8 free spins. For each additional appearing during that or the following Bonus Fall, you'll be awarded an extra 2 bonus spins, up to the max number of 20 free games. Note that Free Spins Symbol can appear only on the reels 1 to 3, and that the free spins can't be retriggered during bonus games.

This feature is activated every time there is a winning payline. When you score a win, those symbols will be removed from the reels. After that, new ones will fall from above to close the gap. Then the paylines are recalculated, and you get an additional opportunity to score yet another winning payline and retrigger the Bonus Falls. All the seasoned slot players have probably already seen features like this. For example, in the famous Gonzo's Quest slots, it's called an Avalanche Feature.

Every time you trigger the Bonus Falls Feature, there will be a multiplier waiting for you. With each new Fall, the multiplier will increase, up to 4x in the base game, and up to 8x in during the free spins. Note that this doesn't affect the number of free spins awarded. Here is how it works:

We liked almost everything about the North Storm slot. The best thing about it is definitely its looks and the sound effects. Rabcat is known for producing very aesthetically pleasing casino games, and this one is no exception. The gameplay is smooth and full of action, so you probably won't ever get bored while playing North Storm. There could be a few more bonus features, but still, the offering is very decent.

If you're a fan of the mysterious, Nordic mythology themed slots, then North Storm is a game you should definitely take for a test ride. But be sure to wear your winter jacket, it can't be freezing up there!

🔎Where can I play North Storm?
You can play North Storm at any online casino we listed at the beginning of this review. No worries, our experts have tested all of them, so you can be sure that everything is safe. Just register an account and enjoy playing!
🎰Is there free spins feature in the North Storm slot?
Yes, there is a free spins bonus in North Storm. To trigger it, you'll have to land at least 3 Free Spins Symbols. It will award you 8 bonus spins, plus additional 2 free spins for each new bonus symbol appearing during that or the following Bonus Falls, up to maximum of 20 free games.
💰What is the most I can bet per spin in the North Storm slot?
The maximum amount you can bet in the North Storm slot is £50 per spin. This game has a fixed number of 25 paylines, which means that you're betting a £2 per payline. On the other hand, the least you can stake is £0.25 per spin.