The Mummy Gold Slot is Perfect for Mobile Gamers

Ancient Egypt is a common destination for slots developers. You can journey there again with Mummy Gold, a slot from Nektan that is intended to be played primarily on mobile devices. Nektan has a reputation for producing very basic slots and this one certainly fits their typical template.

In this Mummy Gold slot review, we will take a closer look at this game for you, and tell you everything you need to know. Read on to find out whether this Nektan slot is one for you! 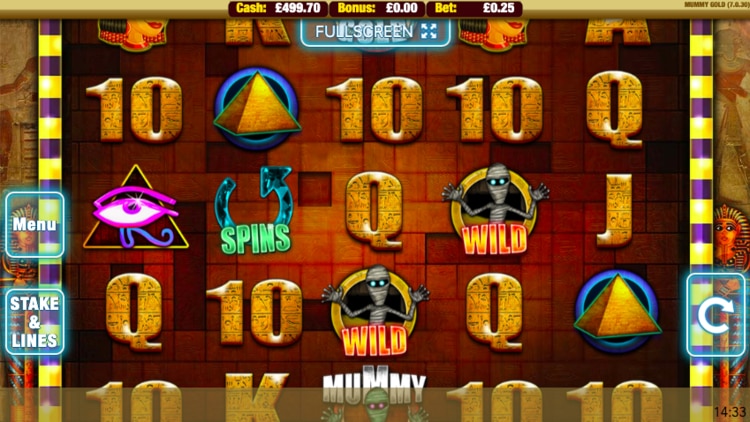 There are 5 reels and 3 rows on the grid in the Mummy Gold fruit machine, and 25 paylines. There is a limited range of betting sizes available. These are 0.01, 0.05, 0.10, 0.50 and 1.00 coins. The game is optimised for play on mobile devices, thanks to its use of HTML5 technology. It came out in June, 201 4, meaning that it has been around for quite a while now without ever becoming particularly popular.

The autoplay feature will keep going for 100 spins before it stops. Whether you use the autoplay feature is up to you. We have to say, though, that the graphics and sound do not make this a game where you might want to sit back and enjoy the action unfolding before you.

What is the Mummy Gold Slot RTP?

The Mummy Gold slot RTP rate is 96.34%, which is pretty average for a slot of this type. It is exactly the same as other Nektan slots, such as Plucky Pirates and Shamrock N Roll. Of course, basing your slots strategy entirely around RTP would be a mistake, so it is worth knowing that this is a medium variance slot too. This means that your chances of frequent small wins are about the same as your chances of picking up big wins infrequently. That does all depend on luck and how the Random Number Generator treats you, though!

If you are an experienced slots gamer then you will probably already have an idea in your head about what Nektan games look and sound like. Cheap and cheerful would be a good way of summing it up. This developer tends to produce games that look a little mass-produced and almost retro in their design. We have to say that the Mummy Gold slot game fits this pattern.

That is not to say that the game does not provide entertainment. But it does not have the immersive feel of games from developers like Playson or Blueprint Gaming – developers who put real effort into how their slots look and sound. The Mummy Gold slot looks like a game that was created in a hurry to fill a hole in the release schedule.

The reels are a simple grid and are set in front of what looks like a tiled floor. A couple of Egyptian sarcophagi stand on either side of the reels, just to remind you that this is an Egyptian-themed game. The design of the screen is really basic. There is a nice touch of detail on the lower value symbols on the reels, though. The numbers and letters are inscribed with hieroglyphics.

The higher value symbols are all objects associated with Ancient Egypt. You’ll see a pyramid, an Eye of Horus, a scarab beetle and an Egyptian queen. None of them have been rendered with any particular detail, and look like generic cut and paste Egyptian graphics. They have the advantage of looking exactly the same on mobile as they do on your laptop or PC, but that is only because they are so simple.

There is a wild symbol that will substitute for all other symbols to create winning combinations for you. This is the Mummy who looks like he is escaping from his tomb. There is also a scatter symbol that has ‘Spins’ written on it. This triggers the bonus feature, and we’ll have a closer look at this later on in this Mummy Gold slot review.

Music plays when the reels spin, and it’s horrible. It actually sounds like it was created to get on your nerves. It’s like the sound of metal objects falling downstairs in an empty house, recorded on a microphone in a bucket of water. Why they bothered with it all is beyond us, but there you go. It adds nothing at all to the game and will definitely have you reaching for the mute button.

Overall, this game looks and sounds cheap. Basic graphics and ugly sound give you little reason to play it. Even on your mobile device, the game still seems limited and unappealing. Let’s see if the bonus features offer slightly more incentive for you to find a Nektan casino and play the Mummy Gold slot machine.

As you might have gathered by now, Mummy Gold is not a complex slot. It should, therefore, be no surprise that the bonus features on offer in the game are pretty limited. In fact, there is just one bonus feature in the game. This is a free spins feature, and it does not include any additional multipliers, games or extra features such as stacked wilds. The feature will literally just give you some free spins.

The feature is triggered when 3 or more of the game’s ‘Spins’ scatter symbol appear on the reels. You will then be awarded some free spins. If 3 symbols spin in you’ll get 15 free spins, if it’s 4 you’ll get 25 and if it’s 5 then 50 free spins are coming your way. You can also receive additional free spins if more Spins scatters appear on the reels during the free spins. Sadly, there are no other additional features to enjoy, so the whole feature experience is a little underwhelming, we found.

We found it quite hard to trigger the feature when we played the game. We could pick up plenty of smaller wins on a pretty regular basis, but getting stuck into some bonus action proved quite elusive. We hope that you have better luck when you play, as there is not a lot else going on in the game that provides much in the way of entertainment.

Overall, this Mummy Gold slot review has to conclude with a negative view of this game. It is so basic in every aspect that it is hard for us to recommend it to you. Nektan has a habit of producing Egyptian-themed games, and if you like Mummy Gold then you might want to try Egyptian Dreams or Eye of Horus. We would also recommend having a look at Riches of Cleopatra from Playson, or Secrets of Horus from Net Ent. They certainly look and sound better than Mummy Gold.

But if you’re looking for a basic game that can be played very easily on your mobile device then you might want to give the Mummy Gold slot a spin. We don’t think it will be a game that you come back to time and again, but you never know.

🎰What is the highest value symbol in the Mummy Gold slot?
This is another slot where you should make sure that you look for the logo! This is because the game’s logo is the highest paying symbol on the reels. If 5 Mummy Gold logo symbols spin in on a payline then you will receive a prize worth 1000x your stake. But you should also look for the Egyptian queen symbol as this will pay out 500x your stake if 5 symbols appear on a win line.
🎰Can I play Mummy Gold for free?
Yes, if you head over to Nektan’s official website you can play Mummy Gold in demo mode for free. This allows you to get used to the game’s appearance and features before you risk any real money playing it. While at the Nektan site, you can also check out the full range of their other slots and table games too. Some online casinos will also give you the opportunity to play the game for free.
🎰Is it safe to play Mummy Gold online?
Yes, all Nektan games are safe to play at online casinos. This is because the company holds licences from the United Kingdom Gambling Commission and the Malta Gaming Authority. These two bodies are two of the world’s strictest gambling regulatory organisations. As such, you can be certain that all Nektan games, including Mummy Gold, are tested for safety and fairness.