Monopoly Megaways slot is a game that most players can relate to. Based on a board game that been around for almost a century, it was only a matter of time before Big Time Gaming added it to their portfolio of branded slots. It was released towards the end of 2019, making it relatively new. With so many Monopoly themed slot games out there already though, has this one been able to stand out? This is what we’re about to find out in our Monopoly Megaways slot review. 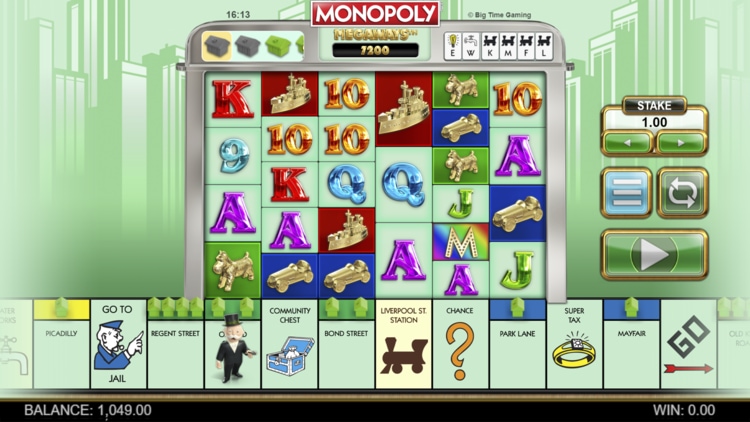 Monopoly Megaways is a 6-reel slot with a bet range of £0.20 up to £40. Similar to most Megaways slot, the game offers players a whopping 117,649 ways to win. This is further enhanced by the slot’s Reel Adventure feature. Autoplay is also available and Big Time Gaming actually gives players a few options to toggle with such as number of spins and loss limits. As we’d expect from a slot of its age, Monopoly Megaways slot has been optimized for mobile play.

Considering the nature of the board game, it comes as no surprise that this is a highly volatile slot. As for the Monopoly Megaways RTP, it comes in at 96.5% which puts it in line with the general standards. Compared to other Megaways slots though like Barcrest’s Rainbow Riches Megaways, it’s actually on the higher side.

Branded slot games tend to go down well because they offer players something that they are familiar with. When it comes Monopoly Megaways, Big Time Gaming has been extremely successful in achieving just that. Everything about the slot’s background will immediately remind you of the board game. Combine that with the high paying symbols that are represented by the original Monopoly tokens; the scene is set perfectly.

As for the soundtrack, it has a jazzy feel to it similar to other money slots like Mega Fortune. The audio is upbeat and although it does go a bit quiet in places, it represents everything Monopoly is about; living life in the fast lane.

The Monopoly Megaways slot may look the part but what interests us most are its bonus features. First off, the slot has a Wild which is represented by the M symbol but no scatter symbol. As the name implies, the game makes use of BTG’s notorious Megaways mechanism. What this means is that when players hit a winning combination, related symbols ‘explode’ and are replaced with new ones. Thus, players are given additional chances to win. The reactions feature is only half of the story though and the slot game has a lot more to offer as we’ll see below.

Big Time Gaming has looked to bring their Monopoly Megaways slot as close to the original board game as possible. Here’s where their Reel Adventure feature comes into play. With every winning payline triggered, Mr Monopoly moves around the board. Players will be awarded, according to where he lands as shown in the list below.

As shown in the list above, the slot works in a similar way to the board game. The biggest difference comes in its free spins feature which we’ll take a look at below.

Free Spins for the Monopoly Megaways slot can be triggered in several ways. Each time a 5th house is added to a property though, players initially receive 8 free spins. Every house beyond this gives players an additional free spin. During this feature, Mr. Monopoly continues to move around the board. Once again, according to where he lands, players receive additional bonus features. There’s also an Unlimited Win Multiplier which starts at 1 and increases by 1 for each utility owned. This further increases when landing on properties but we’ll take a look at all of that in the list below.

Once the free spins round is over, players lose ownership of all train stations and utilities as well as all visited properties. The good news is that retriggering the feature will give players an additional 3 free spins, over and above the initial 8.

Slot Verdict: Better than the Board Game!

Many have tried to join the Monopoly slot family, but few have been a hit. Even though it’s still early days, Big Time Gaming’s Monopoly Megaways seems to be headed in the right direction. It looks and feels like the game but has also been perfectly combined with some innovative features. The bonus features are exciting and although it can take time to trigger any of them, the Monopoly Megaways slot pays out up to 14,700 times a player’s stakes. Whether you a die-hard fan of the board game or simply an adrenaline seeker, the slot game is worth taking a spin on.