Hasbro’s Monopoly is no stranger to the world of online slots, and Monopoly Heights is Bally’s interpretation of the iconic board game. Bally bring over 75 years experience in creating entertainment and slot games to the table, but is this union really the match made in heaven that it seems to be? How does Monopoly Heights compare to other licensed slots like Big Time Gaming’s Monopoly Megaways or Barcrest’s Monopoly Big Event? Find out in our Monopoly Heights slot review! 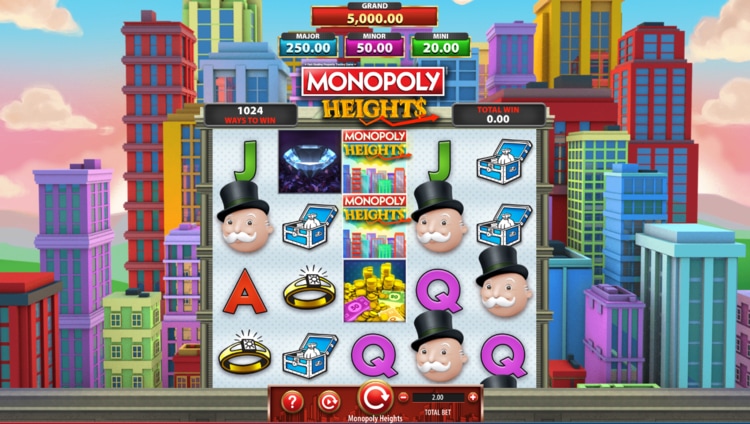 Bally’s Monopoly Heights initially starts off with 5 reels and 4 rows, though, the Expanding Reels feature can make the play area grow to up to 8 rows. This same feature affects the number of paylines too, as these can go from 1,024 all the way up to 32,768 when fully expanded.

Players can wager between £0.25 and £100 on a single spin, and it’s technically possible for a player to win 32,768x their stake on a spin, though that’s unlikely to the point of bordering on impossibility. There’s also a £250,000 limit on winnings from a single spin.

In reality, though, we experienced far smaller wins than that. In our time testing Monopoly Heights by Bally, we didn’t even get to 50x our stake, let alone the £250,000 limit on winnings.

Monopoly Heights has a theoretical RTP of 95.85%, which is lower than we generally like, though not by much. The volatility, however, might turn some players off. This is an extremely volatile game. Yes, huge wins are a possibility, and very small wins happen occasionally, but the mid-sized wins that most players are accustomed to aren’t really anywhere to be seen.

Bally can be pretty hit or miss when it comes to visuals and soundtracks in slot games, but they knocked it out of the park with Monopoly Heights. The game is charming and whimsical, which isn’t something we see very often with online slots games. Bally has a much better track record with their licensed games, like Michael Jackson: King of Pop (which had a phenomenal soundtrack), than they do with their own original games, like Pharaoh’s Dream, which was noticeably cheaper looking.

Everything is bright and colourful, from the symbols to the background peeking out from behind the reels. This is complemented by an upbeat soundtrack that is cheerful and will likely put a bit of spring in your step.

Bally have done an excellent job of capturing the Monopoly vibe with their design choices, and their UI makes the game easy, satisfying, and engaging to play. Your wins are clearly marked as the numbers float onto the screen, and even the character animations are clean, smooth, and fluid.

Monopoly Heights takes a different take on symbols than your average slot. Instead of each symbol having its own values, and there being just low paying and high paying symbols, there are three categories of symbol, and every symbol within the same category holds the same value.

Other than some of the lowest paying symbols, the symbols are all taken straight out of the core Monopoly game and should be instantly recognizable. The three different symbol categories are as below:

There are two major features in Monopoly Heights, both of which could result in huge wins. Technically, only one of these resembles a traditional bonus feature, the Jackpot Feature. However even the Jackpot Feature puts a unique twist on things. The other feature, Expanding Reels, is much rarer to find in slots games, and literally adds new levels to the game, making it much more interesting.

We do have one bone to pick with Monopoly Heights, though. There are no features in the game that provide the player with any free spins. This isn’t the end of the world, by any means, however we feel like it’s a lost opportunity that stops this game from really being as fun and engaging as it could be.

This is a fun game mechanic that’s activated by Mr. Monopoly himself. Whenever you get any wins with the Mr. Monopoly symbol, all the symbols freeze and a new row is added. If another Mr. Monopoly symbol appears on the row above in a spot along the current payline, then yet another row appears (up to a maximum of 8 total rows, including the original 4).

Each new increases the amount of available paylines, going from 1,024 all the way up to a maximum of 32,768. At the end of the feature (i.e. either at the 8th row, or a lower one if no Mr. Monopoly symbol appears), all winning combinations are calculated.

There are specific rules about how Wild symbols interact with this feature, as detailed below:

Technically, if one were to have 8 rows filled entirely with Mr. Monopoly symbols (or a combination of Mr. Monopoly symbols and Wilds), that would be a win of 32,768x your stake, but the likelihood of that happening is beyond slim. In our experience, this feature regularly gave us wins of 8-14x our stake, and occasionally as much as 25x our stake.

The Jackpot Feature is activated in two different ways:

Considering how rare the Scatters are, we’re glad that Bally included that second option to activate the feature, as otherwise most players would likely never see the Jackpot Feature.

The Jackpot Feature itself gives players the chance to win one of four jackpots, and which jackpot you win depends on which symbols you uncover by clicking on the selection of 32 face-down bonus cards. The jackpots are as follows:

Players continue picking cards until they meet the requirements for one of the jackpots, meaning that players are most likely to receive the Mini or Minor jackpots as they have the lowest symbol requirements.

Bally’s take on Monopoly, arguably one of the most famous games in the world, is definitely a home run as far we’re concerned. Bally found a way to capture the essence of the Monopoly brand and still put a unique spin on it. Sure, we’d appreciate the opportunity to earn a few free spins, but that’s not what makes or breaks a slot game.

From the insane amount of paylines to the unique bonus features, the only way that we think is fitting to end this Monopoly Heights slot review is to tell you to give the game a spin for yourself.