Slots that use an Oriental theme are very common indeed, so before the Monkey King slot Yggdrasil launched we were a little concerned that it would be unoriginal and uninspiring. How wrong we were. This game is packed with bonus features and its graphics are a real visual treat.

To find out just why we liked this game so much, you’ll need to read this Monkey King slot review. You can find out all about dancing monkeys, stacked and sticky wilds, and which symbols to watch out for. 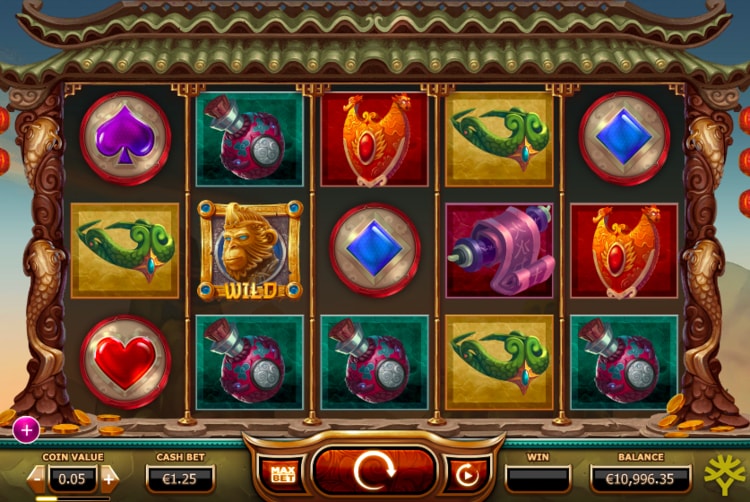 The Monkey King online slot is played on a grid with 5 reels, 3 rows and 25 ways to win. These are not paylines in the strictest sense of the word, as the game has a ‘win all ways’ system on its grid. This means that any combination of 3 or more of the same symbols running subsequently from left or right will award you a win. The game was released by Yggdrasil in May 2016 and can be played on all mobile devices with no compromise in quality.

The minimum bet is 25p and the maximum is £125, though this may vary depending on which casino you are using. There is also a game history button that allows you to review your last 10 rounds in the game. An autoplay button if you want to take a back seat and watch things happen for a while. There is also a very detailed information tab that can come in handy.

This game has an RTP of 96.10%. This figure is a little on the low side for a Yggdrasil slot but still falls into a typical range for them, with the majority of their slots having an RTP of between 96% and 97%. Dark Joker Rises, for example, has an RTP of 96.30%, while Holmes and the Stolen Stones usually operates at a figure of 96.80%.

If you prefer to base your tactics for a slot around its variance, then you’ll be interested to know that Monkey King is a low to medium variance slot. This means that your chances of frequent small wins are usually going to be greater than your chances of collecting infrequent big wins. This can only ever be a rough guide to what is likely to happen, of course, but our experiences of the game seemed totally with this statement.

The Monkey King online slot looks like a typical Yggdrasil game, in that it looks really great. The graphics are lush and luxurious, and the game is very easy on the eye. There are none of the garish shades and bright colours of less sophisticated slots games. The reels are set as the front wall of a Chinese pagoda, and decorated with ornate carvings of fish that are very detailed. Behind the reels we can see a stereotypical version of a Chinese countryside scene. This too is very detailed and helps to create a really immersive atmosphere as you play the game. Gold coins are scattered at the side of the reels.

The sound effects are not quite as impressive as the graphics, but they certainly do an effective job. The reels click as the symbols fall into place, and there are some nice flourishes of sound when you collect wins. The music is a dramatic, Chinese themed piece of classical music. It’s not bad, but it does start to grate after a few minutes of play and we were glad of the presence of a mute button.

The symbols on the reels are beautifully detailed. The lower value symbols are gemstone versions of playing suit symbols. You’ll see red hearts, purple spades, blue diamonds and green clubs. The higher value symbols are all associated with the game’s Chinese theme and are also very carefully and attractively designed. There is a cooking pot, a scroll, a potion bottle and what looks like the Monkey King’s crown.

The Monkey King is the game’s wild symbol. He will only appear on reels 2 or 4, and also has an additional treat in store for you that we’ll tell you about later. There are two scatter symbols in the game – a treasure chest and a free spins logo. We’ll give you all the details you need about those in the next section of this review.

The Monkey King slot machine game has several attractive bonus features that can be lucrative, with a bit of luck. There a 5 bonuses in total, and we’ll break all of these down in detail for you here.

Free Spins
You can trigger the free spins bonus by either landing 3 of the free spins symbols anywhere on reels 1, 3 and 5, or via the treasure chest bonus, we described above. When this happens, you are given 3 options:
1. Incremental wilds – In this mode, you are awarded 6 free spins and the Monkey King will also add a permanently sticky wild symbol to the second or fourth reel on each spin until those reels are filled with wilds.
2. Stacked wild – This option gives you 8 free spins. All wilds on the second and fourth reels remain sticky. A special triple stacked wild can also land on the third reel during these spins.
3. Starting Wild – You are given 10 free spins. These start with a permanently sticky wild symbol in the centre of the reels. This is complemented by permanently sticky wilds that appear on the second and fourth reels.

We enjoyed this game and could find few faults with it beyond theme music that was a little irritating. So this Monkey King slot review will conclude on a positive note by recommending that you give this game a try. Even if you don’t enjoy the excellent features, the game still looks very impressive indeed. There is plenty of potential for winning big prizes too, though we found that triggering the feature could take a while.

If you enjoy other Chinese themed monkey-related slots then have a look at Journey to the West by Pragmatic Play or Journey of the Monkey King by Bla Bla Bla Studios.

🎰Where can I find how to win on Monkey King slot machine?
The best way to find out how the paylines work and what each symbol is worth is to use the I tab on the game itself. You can find this by clicking on the purple plus sign in the bottom left corner of the game’s screen. Via this, you can also open up a detailed tab that is packed with useful information about the game. You’ll find a paytable, payline structure and loads of information about the game’s features there.
🎰How can I be sure that the Monkey King slot is fair?
Yggdrasil state in the game’s background information that outcomes in the game are controlled by a certified Random Number Generator. Yggdrasil also holds licences from the UK Gambling Commission and the Malta Gaming Authority. These are two of the world’s strictest gambling regulatory bodies and they audit all licence holders for fairness and safety on a regular basis. This means that you can rest assured that this slot is legit and not a scam in any way.
🎰What autoplay options are there in Monkey King?
You can fine-tune your autoplay options in this slot via the use of the settings button. You find this by clicking on the purple plus sign in the bottom left of the screen. You can set autoplay to stop automatically if you lose a certain amount of money if you have increased your bankroll by a certain amount or when you enter the game’s free spins bonus feature.