Ainsworth Gaming Technology are back at it again with another African-themed slot. The studio released Roaming Reels, their other slot of the same genre, in 2016. Mighty Wilds was released a year later, so our main goal in this Mighty Wilds slot review is to find out whether Mighty Wilds can do a better job of holding players’ attention that Roaming Reels did.

We must admit, at face value Mighty Wilds seems very similar to Roaming Reels, but what will we find when we dig deeper? Could Ainsworth Gaming Technology have finally cracked the code? Continue reading below to find out. 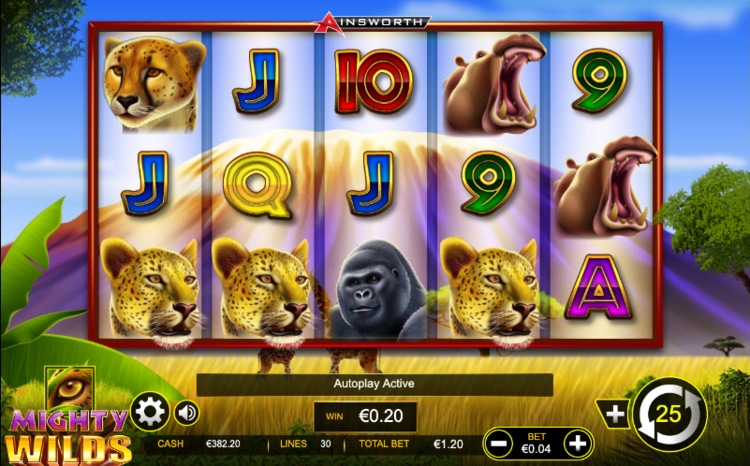 Mighty Wilds is played across 5 reels and 3 rows. The online slot game features 30 paylines, which is pretty standard fare in 5-reel slots. Players can wager as little as £0.30 all the way up to £3000 on a single spin, meaning players of all types are catered for there.

In terms of the biggest wins up for grabs, players can win up to 30x their stake during the base game, and up to a whopping 250x their wager in the bonus feature. Like with other Ainsworth games, the autospin feature is limited to a paltry 25 spins, so players will find themselves reaching for the mouse every couple of minutes or so to reactivate the autospin feature.

Unfortunately, Mighty Wilds has a theoretical RTP of 93.82%. This is quite disappointing when compared to the average of 95.98%. Ainsworth’s slots are known to have RTPs that are a little below the average, but even other Ainsworth slots games like Roaming Reels and Jade Emperor have RTPs well over 94%.

In terms of variance, Mighty Wilds is considered to be a medium volatility slot, which should suit a wide variety of different players.

Again, we see parallels to draw between Roaming Reels and Mighty Wilds. Like its predecessor, Mighty Wilds has no background music in the base game, and the slot uses the exact same, cheap sounding “slot game noises” that Roaming Reels does.

Like Roaming Reels, there is background music for the bonus feature, though this is a different track, even if it sounds like it could have been off the same album of tinny, dated, “African-themed” background music.

The visuals aren’t exactly the same as Roaming Reels’ visuals, with one exception. Both games use the exact same piece of artwork for the Lion Wild symbol, including the same roar. Overall, don’t look to Mighty Wilds for an out-of-this world audiovisual experience.

Mighty Wilds features both low-paying and high-paying symbols. As we’ve seen with a number of Ainsworth games so far, the low paying symbols are 9 to A, as you’d find in a deck of cards.

The high paying symbols are a Leopard, a Panther, a Hippo, a Cheetah, and a Gorilla, all keeping within the African theme.

The Scatter symbol is an Eye, and is a high paying symbol itself. As is normal in online slot games, 3 or more Eye Scatters activate the bonus feature. Unfortunately, when it comes to activating the bonus feature, there’s no difference between 3 scatters or 5 scatters, you start the bonus feature with 10 free spins.

Once again, Ainsworth have given us a slot game with a single bonus feature. The fact that this one is a little more interesting, though, makes it a lot easier to be happy with just the one bonus feature.

As we said above, the bonus feature is activated by the Eye Scatter symbol. If between 3 and 5 of these appear on the reels, suddenly background music will start playing and you’ll be awarded with 10 free spins.

The first thing most players will notice is a new, 6th reel has appeared in the play area. This 6th reel is special in that the only symbols that can appear in here are the Eye Scatter or the Multiplier symbols we mentioned above. It’s also unique in that it’s the only reel that is generally NOT filled with symbols, and can have no symbols at all in it.

If players land a multiplier symbol in the 6th reel, any win for that spin is multiplied by the amount listed in the symbol (i.e. 2x, 3x, or 5x). This combines nicely with how the Lion Wilds behave in the Bonus Feature, as the Lion Wilds expand in reels 2 and 4. If a Lion Wild symbol lands in either the second or fourth reel, it will expand to take up the entire reel, replacing any other symbols that may have been there before and making it easier to record wins.

Our only complaint about the Mighty Wilds Bonus Feature is that it occurs so rarely. The first time we saw the bonus feature for ourselves, we were over 300 spins into the game. The second (and last) time we triggered the bonus feature was just over 100 spins later. Of course, this could be explained by the RNG (random number generator) that powers the slot, but only triggering the bonus round twice in over 400 spins is just a little too rare for our tastes.

The bonus feature is marginally more interesting in Mighty Wilds than it was in Roaming Reels, however Mighty Wilds still doesn’t really hold a candle to other African-themed slots like Thunderpick’s Pink Elephants or WMS’ Raging Rhinos Megaways. The RTP is one of the lowest we’ve ever seen, there’s only a single bonus feature, and the game is much too similar to Roaming Reels, which Ainsworth published a year earlier.

🎰What’s the RTP for Ainsworth’s Mighty Wilds?
Mighty Wilds has a theoretical RTP of 93.82%, which is surprisingly low. Ainsworth Gaming Technology tend to produce slots with a lower than average return to player, but Mighty Wilds has an RTP even lower than what’s considered average for an Ainsworth slot game.
🤔Is Mighty Wilds the sequel to Roaming Reels?
No, while the two games share MANY similarities, including some visual assets and sound effects, the games are not considered to be related to one another, other in that they are both African-themed online slot games and they were both published by Ainsworth Gaming Technology.
⭐What’s the biggest win I can get from Mighty Wilds?
In the base game, the biggest win a player can see in Mighty Wilds is 30x their stake, which is a large, though not gargantuan win. In the bonus feature, however, players can win up to 250x their stake, which (depending on how much the player wagered), could be a much more significant jackpot.