If you’re a fan of the late, great, Michael Jackson, then Bally’s Michael Jackson: The King of Pop online slot should be right up your alley. From the amazing and instantly recognizable soundtrack, to the many different bonus features, this online slot game will have you waving a blanket out your window like it’s 2002. Take a seat and get ready to go on a wild ride, because we’ve got everything you need to know and more below in our Michael Jackson: King of Pop slot review! 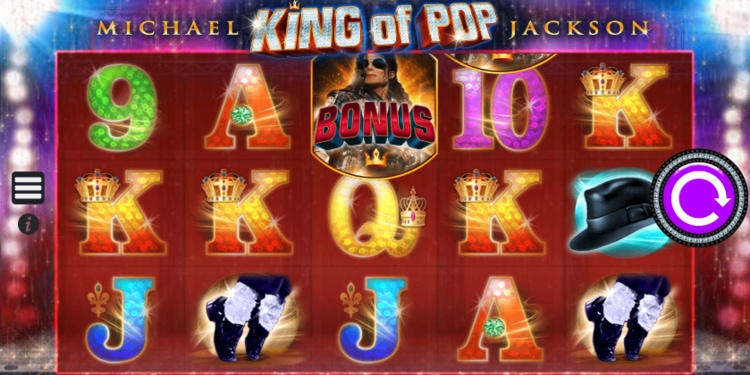 Bally’s Michael Jackson: King of Pop slot is played on 5 reels and 3 rows. The game features 25 paylines, meaning there are decent opportunities to score regular wins, especially when you take into consideration the abundance of Wild symbols and Scatters.

Players can wager between £0.40 and £80 on a single spin, and with a maximum jackpot of 2500x your stake up for grabs, players can experience anything from small to humungous wins. With the Michael Jackson: King of Pop slot, you can walk away feeling like a smooth criminal.

In our first bit of bad news, though, Michael Jackson: King of Pop slot doesn’t have an autospin feature, meaning you’ll need to give your clicking finger a workout as you tap away on your touchpad or mouse to make the reels sing.

Bally have set Michael Jackson: King of Pop’s theoretical RTP to 96.01%, which is above average when compared to most other video slots out there, though still a fair way away from NetEnt’s take on a musical-star-based game with their Jimi Hendrix slot. In terms of volatility, this is a medium volatility slot, so you can still expect wins relatively often without having to give up the chance to take home a jackpot-sized win.

Michael Jackson: King of Pop is an online slot game that should appeal to a wide variety of players, from the most casual out there to the more passionate players.

The backdrop behind the reels in Michael Jackson: King of Pop is the glitter-rain effect made famous by the 2009 concert film Michael Jackson’s This Is It, which immediately transports players into the world of the King of Pop.

As we’ll discuss in more detail below, Michael Jackson is all over this slot in terms of visuals, with the high-paying symbols being iconic MJ imagery like his white glove or his moonwalking shoes. The King of Pop himself appears on the Scatter symbols, making it impossible to forget who this online slot game is dedicated to.

The soundtrack is possibly one of the best we’ve ever seen in a slots game, featuring some of Jackson’s most popular songs from throughout the decades. Players are treated to songs like Dirty Diana, Beat It, Billy Jean, Smooth Criminal, and Bad as they play the game and activate its features.

We expected instrumental versions of his tracks, or at the very best, covers of his songs, but we were more than pleased to hear the voice of Michael Jackson himself featured in this iconic online slot game. The only thing that could make this better would be if, like NetEnt’s Guns N’ Roses slot, you could actually choose which track was playing.

The low paying symbols are your standard online slot fare of 9 to Ace from a deck of cards. These have been bedazzled and camped up to fit the overall theme of the slot. The King and Queen symbols even have their own crowns, which is a nice little bit of attention to detail that we appreciated.

The high-paying symbols are all iconic Michael Jackson pieces of symbology, as we mentioned above. There’s the Shoes symbol, which depicts MJ moonwalking, as well as MJ’s iconic aviator Sunglasses, his instantly recognizable hat, as well as the quintessential symbol of the King of Pop: the single White Glove.

The Wild symbol comes in a few different variations and flavours. The regular Wild can appear randomly on reels 2-5 and substitutes any symbol other than the Bonus or Jackpot. Interestingly enough, the Wild is also a high-paying symbol itself, carrying its own value and actually being the highest-paying symbol, other than the Jackpot.

The game also features two different scatter symbols the Bonus and the Jackpot. The Bonus symbol, as you’d expect, activated a bonus feature when 3 of them appear on the reels, though we’ll discuss that in further detail in the bonus section below. The Bonus symbol is a waist-up photograph of Michael Jackson himself with the word “BONUS” super-imposed in front of him, making it extremely easy to see.

The Jackpot Symbol applies massive multipliers to your stake, and looks like an artist’s impression of Michael Jackson’s signature, intense stare, with the word “JACKPOT” below. Players can end up with anywhere from 2x to 2500x their stake with this symbol, depending on how many appear, and is always a welcome addition to any spin.

This wouldn’t be a true tribute to the King of Pop without a seriously good selection of bonus features, and Bally certainly didn’t disappoint here.  There are FIVE different bonus features, each with their own unique quirks and different opportunities to take home some big wins.

This is a randomly activated feature where Michael Jackson appears and begins dancing across the reels. Two of the reels will be randomly selected to become stacks of Wilds. This might not sound like a big deal, but this feature saw us taking in up to 20x our stake in wins, so we’re quite big fans of it.

Michael Jackson: King of Pop includes yet ANOTHER random bonus feature centering around Wilds. This feature starts with Michael Jackson moonwalking across the reels, transforming symbols into Double Wilds (aka Moonwalk Wilds) as he goes.

The way that this feature interacts with the Bonus and Jackpot symbols is what makes it exceptionally exciting, and we even managed to win 50x our stake using this feature one time!

We’ve already talked about two of the bonus features in Michael Jackson: King of Pop, and the bonus symbol has barely even come up! This feature, however, completely depends on it. The Bonus symbol can only appear on reels 2 to 4, and in order for them to activate, all 3 need to appear.

The regular bonuses are decent enough, though the ones with multipliers attached are where the biggest wins can be found, outside of the free spins rounds, though more on those below:

The Beat It Free Games bonus round can only be activated through the Spin the Wheel bonus feature, and it takes players to a bonus round where they’re given 10 free spins. 10 free spins sounds great as it is, though what makes this bonus round unique is that any Wilds that appear during the round remain fixed on the reels until all 10 of your free spins are done.

Players can end up accumulating a massive amount of Wild symbols and some pretty big wins here. Wilds can only appear on reels 2, 3, 4, and 5 though, so you won’t be lucky enough to trigger a payline of 5 Wilds over and over again, though once or twice is still possible.

Neither the Bonus symbol nor the Jackpot symbol appear in the Beat It Free Games round, which also means that there’s no way to trigger any additional free spins. You get 10, no more, no fewer.

This is similar to the Beat It Free Games mode above in that you can only activate this bonus round through the Spin the Wheel feature. Players are given 5 free spins, and yet again, there are no Bonus or Jackpot symbols or any other ways to trigger more free spins.

This doesn’t mean that the Smooth Criminal Free Games round is inferior to the Beat It Free Games round, though, as what makes this bonus feature special is the particular configuration of stacked Wilds that it throws at you:

This might not sound as exciting as the sticky Wilds in the Beat It mode, but we experienced a few big wins with this mode, and even won up to 45x our stake here.

We started off this Michael Jackson: King of Pop slot review by saying that this slot is perfect for fans of Michael Jackson, and that’s true, but what we left out was that this is an amazing slot in general. Whether you’re a true Moonwalker or just someone who likes well-made online slots games, Bally’s Michael Jackson: King of Pop slot definitely deserves your attention. The game’s five unique bonus features are all designed to not only be exciting, but to give players the opportunities to take home some massive wins. The only thing we’d change about the game is adding an autospin feature, because we love to watch those reels spin!