Mega Joker is a slot from Net Entertainment that has a strong retro flavour to it and some interesting bonus features. The screen has a very unusual set-up when compared with most of the other video slots that you see at online casinos these days. It also comes with a tasty looking progressive jackpot.

Read this Mega Joker slot review to discover whether this game really takes you back to a golden age of arcade fruit machines! 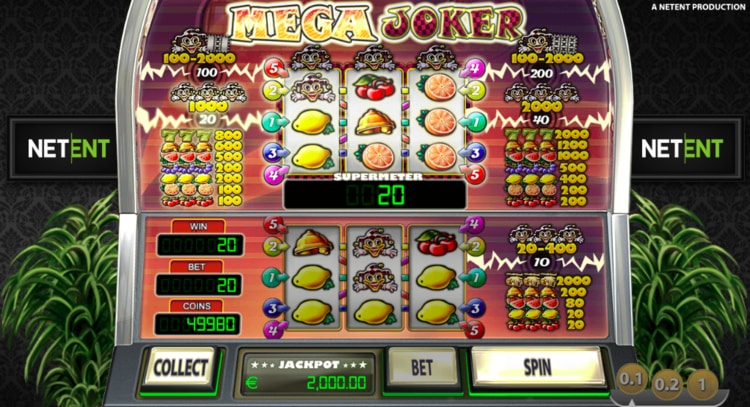 Key Details of the Slot

The game was originally released in 2011, and can be played on mobile devices with no penalty in quality. This is thanks in part to its use of HTML5 technology. The maximum win that you can collect, when the game is in Supermeter mode, is 2000 coins.

The RTP of the Mega Joker slot is given as 99% by Net Ent, which is very high indeed. There is another figure too, however, which is 85.28%. This variation is explained by the fact that playing in the Supermeter mode is reliant on some level of skill from the player.

You need to choose the right size of bet level during this mode to ensure that you collect the maximum possible winnings. Other slots from Net Ent with a similar RTP include Jackpot 6000 (98.80%), Blood Suckers (98.00%) and Kings of Chicago (97.80%).

The game also has high volatility, so you can expect some thrills and spills while you wait for the big wins to come along. You can win a progressive jackpot in the game too. This is awarded randomly during basic mode, according to the Net Ent official website. You cannot win the progressive jackpot when the game is in Supermeter mode, however.

A Sense of Nostalgia

The first thing that you will notice about this slot is its unusual appearance. The screen is split into 2 sections, with the base game reels being in the lower section and the bonus feature reels being in the top section. We’ll deal with how that actually works later in the review. You’ll also see that the screen depicts an old-style fruit machine that sits in a casino. There are even potted plants sitting alongside the reels, helping to add a touch of immersive detail to the setting.

The game has a strongly retro feel in both appearance and sound. The mechanics mimic the clunky feel of an old one-armed bandit, while the sound effects have a similarly 1980s vibe to them. You can see a paytable displayed alongside the reels, something that will look very familiar to anyone who spent any time in seaside arcades in Britain in the 1980s.

There is no irritatingly constant musical soundtrack accompanying gameplay. The other sound effects are integral to the action and do a solid job without being spectacularly memorable. The reels whirr as they spin and then clunk satisfyingly into place.

The symbols used on the reels have a similarly retro feel to their design. You will see the classic set of symbols appearing on both sets of reels in this game. You can find cherries, oranges, lemons, grapes, watermelon, golden bells, treasure chests and the number 7.

The highest value symbol is the joker, as you might expect from the game's title. All of the symbols and their values are shown on the screen as part of the game’s visual design – another touch that will be familiar to anyone who played on fruit machines in the 1980s.

Of course, the most notable visual feature of the slot is the way that 2 sets of reels are used in it. This set-up is integral to the way that the game’s bonus feature works. We’ll take a closer look at that in the next section of this Mega Joker slot review.

Choose Your Bet Levels on the Supermeter Reels

There are no wild or scatter symbols in this slot and no free spins feature either. The way that this slot works is much more like an old style fruit machine. You can almost feel the machinery clunk and whirr as you watch the reels spin on the screen. The feature is triggered whenever a win spins in on the lower set of reels. When that happens, you have a decision to make.

When a win occurs, you can opt to collect your winnings and continue to play on the lower set of reels as normal. Alternatively, you can press the ‘Bet’ button that is located underneath the reels, and move onto the Supermeter reels. If you opt to do this, the action switches to the upper section of the screen. The first thing that you must do before playing on these reels is to choose your bet size. Again, you do this by clicking on the ‘Bet’ tab.

It’s All About the Bet Size in Mega Joker

Your bet size can vary – you have the option, depending on how much you have won on the lower reels – to change your bet from 20 coins to 40 coins, 100 coins or 200 coins. This will affect the size of your winnings and requires careful judgment. It is nice to see a slot where you have to use a touch of judgement, even though the actual decision-making has little real effect on the outcomes. Really, the key decision boils down to how you manage your bankroll.

Although the feature seems very basic at first, it’s actually pretty enjoyable. There is a small element of judgement and skill involved in shaping successful outcomes from it too, which adds a little touch of extra spice to things. The key to enjoying this game is to relish the retro vibe and allow yourself to be drawn into the game. The real enjoyment comes from picking the right bet strategy when the Supermeter reels are in play.

There’s a Progressive Jackpot Too!

You can also pick up a progressive jackpot prize in this slot. The current jackpot amount that is available to win is shown at the bottom of the screen. The prize is awarded at random on any spin. Each time a bet is made across the game’s network, 3% of the value of that bet is allocated to the jackpot prize pot.

An Exciting Trip Back in Time with Mega Joker

This Mega Joker slot review will conclude on a positive note by saying that we enjoyed this game. It’s a quirky and slightly eccentric slot that has a pleasing retro vibe to it. The way the bonus feature works offers more entertainment and involvement than many other slots, and there is the tempting prospect of a progressive jackpot to keep you interested too. We really liked this game and we recommend that you give it a go!

If you enjoy slots with a retro feel to them, then you might also want to play Double Bubble from Gamesys, or possibly try Retro Reels from Microgaming.

🤔Where can I find out how to play Mega Joker?
As with all slots, the best way to find out how to play Mega Joker is to try the game in demo mode. Your favoured online casino will usually allow you to play the game for free to practice it. This is a good way to familiarise yourself with how things work. If you need to find a casino that offers Mega Joker, use our list of Net Ent casinos here at this website. It’s updated constantly!
🎰How can I win the progressive jackpot in Mega Joker?
You have no direct control over winning the progressive jackpot in the Mega Joker slot. The jackpot is awarded at random on any spin in the slot’s base game. You can increase your chances of winning it by boosting your bet size, though. If you decide to do this then careful bankroll management is key. Never bet more than you can afford to lose, as this is a recipe for disaster.
💰How do I trigger the Mega Joker bonus features?
The bonus feature in this slot is activated when you spin in a win in the base game on the bottom set of reels. You are given the option of banking your win or using it as credit to play on the Supermeter reels in the top half of the screen. The size of the prizes you can win in the Supermeter reels is determined by the size of the bid you made while playing on the lower reels.