Medusa Megaways is a real-life slot monster! It features several super exciting bonus features, including free spins, respins and theoretically endless multipliers. Also, because of its megaways mechanics, this game can give you up to staggering 117.649 ways to win. But is everything as good as it seems?

To get an answer to that, take a look at our Medusa Megaways review, where we unravel everything you need to know about this NextGen slot. And don't worry, if you're brave enough to enter the Medusa's liar you won't be turned into stone, but your bets could be ruthlessly multiplied! 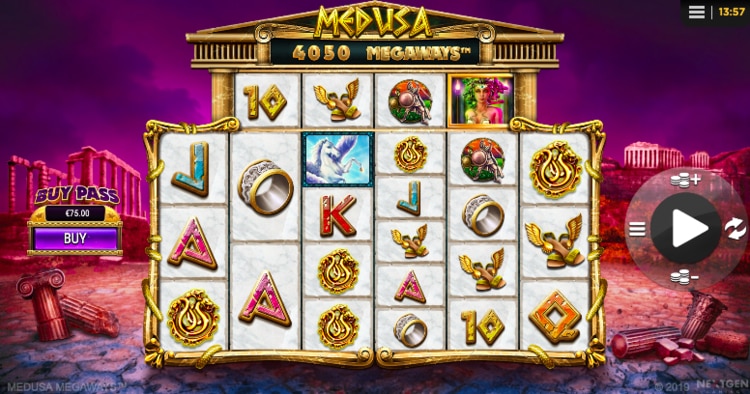 Medusa Megaways isn't your typical slot game by any means. It has 7 reels altogether, with one of them being horizontally placed above 6 regular ones. This game is using megaways mechanics, meaning that the number of symbol positions on the main reels is determined randomly before each spin. Reels 1 and 6 can have between 2 and 7 symbols positions, while the reels 2, 3, 4 and 5 can contain from 2 to 6 symbols. That's why Medusa Megaways can feature anywhere between 324 and 117.649 paylines.

You can bet from £0.25 to £25 per spin, which is a pretty decent range. Some high-rollers would probably like to see the limits set a bit higher, but most of the regular players should be satisfied. Also, if you get tired of spinning the reels manually, be free to use the autoplay option. It's very basic, with no additional options, but it'll do the job.

Medusa Megaways has a solid RTP of 96.28%. It a bit above the industry average of 96%, meaning that this game is a good choice even if you're planning to play for an extended period of time. On the other hand, note that because of its specific mechanics, Medusa Megaways is considered as a highly volatile slot. It means that you can expect to get a lesser number of larger awards, rather than more smaller ones.

Another important mechanics in this game is the Reactions feature. It's triggered every time there is a winning payline. After you get the payout, the winning symbols disappear from the reels, and new ones start cascading from above to fill the empty spots. Only on the extra reel, new symbols will begin appearing from the right side. After that, the wins are evaluated again, and the whole process can be retriggered indefinitely.

Not only that this feature looks good and gives you more chances to score a winning payline, but it also plays a major role in the bonus rounds, which we will discuss further in the following paragraphs.

Medusa Megaways has rich graphics full of animations and crisp colours. The reels look like a part of the Greek temple, while the background is just a picture of a ravaged land with ruins all over it. The whole game is very dark, with a lot of black, purple and red colours. All of that is contributing to a bit scary atmosphere. You somehow get the feeling like the Medusa will pop up behind the corner every minute!

The audio effects are also fantastic. The background music sounds mysterious and tense, which just adds up to the overall atmosphere of the game. If you listen carefully, you'll even hear hissing snakes sounds! When you click the 'spin' button, the music will intensify, making the game even more exciting.

We believe that in terms of audio and video effects, Medusa Megaways is better than most of the other popular megaways slots like Extra Chili, Bonanza Megaways or Primal Megaways. It has such a unique atmosphere that will make you feel like a part of some adventure novel!

Most of the symbols in the Medusa Megaways are inspired by ancient Greek mythology and culture. There are things like golden amulets, rings, sandals and winged horses all spinning on the reels. Even the lower-value symbols, which are card signs and numbers, are redesigned to match the overall look of the game.

There are three special symbols in Medusa Megaways. The wild symbol is scary Medusa itself, while the scatter is the game logo. Apart from these two usual ones, you'll find a third special symbol, which is the soldier. It can appear only on the extra reel during the free spins game, so you won't be seeing it that often. But once he makes the appearance on the reels, there will be hefty awards waiting for you.

As we mentioned a few times by now, Medusa Megaways slot has a lot to offer in terms of bonuses. There are several separate features, so we'll just start from the beginning and walk you through each of them.

Medusa's Gaze Feature is triggered each time a wild symbol appears on the extra reel, meaning that this bonus is available both during the regular game and free spins rounds. Once it starts, the reels directly below the wild are covered by Medusa, which then replaces one or more symbols on that reel with wilds.

The feature can be retriggered after each reaction, so in theory, you can get the infinitive number of Medusa's Gazes in a row. Also, note that all wilds added to the main set of feels that haven't been part of the winning combo remain in place until the end of the round, giving you even more chances to win.

To enter the Free Games Feature you'll have to land at least 3 scatter symbols anywhere on the reels, which will automatically award you 10 bonus spins. Each additional scatters appearing will add 5 more free spins on top of that. Also, keep in mind that this feature can be retriggered. It may not seem like a lot, but note that Free Games are just an entry gate for many more special bonuses Medusa Megaways slot is hiding.

You'll start the Free Game with the 2x multiplier, but then after each reaction, the multiplier will increase by 1. Reactions can happen indefinite amount of times, meaning that, in theory, there is no limit on how huge multiplier you can end up with! Multiplier stays active until the end of the Free Games and applies to all winning combinations.

You'll see two snakes on the side of the extra reel appearing during the Free Games Feature. Each time a special soldier symbol lands on the extra reel, one of those snakes will attack him. If the soldier is attacked by the left snake, it will turn into a wild symbol. On the other hand, if it's the right snake attacking, the solder symbol will become a scatter. Note that Medusa's Gaze Feature is triggered after the Snake Strike is over and all the soldiers are transformed into wilds or scatters.

Once you have finished all the free spins, the Temptation Feature is triggered. Before you go back to the Medusa Megaways base game, the feature will make a huge proposal - you can either end it all and just continue playing as usual, or you can choose to replay the Free Games Feature.

If you choose the replay option, all the winnings you got from the previous rounds are forfeited. So choose carefully, Medusa is a tricky beast! Also, note that Temptation Feature will be available only once after each Free Games Feature.

This a great feature for those of you who just can't wait for the scatters to fail in place and start the Free Games. Luckily, many NextGen slots have the Buy Pass feature which allows you to buy your way into the bonus land for the cost of 100x your current bet. So, just pay the price and Free Games Feature will start immediately.

This is something every experienced slot player have seen at least a hundred times before. After each win, there is an option to enter the gamble feature where you can double or quadruple your winnings by betting on the card colour or sign. It's a common feature, but still, a nice way to bring even more excitement into the game.

Medusa Megaways is an excellent slot game, there is no question about it. Everything about it is great, starting from graphics and sound effects to an array of bonus features that include bonus spins and unlimited multipliers.

The only problem we could think of is that since the game is so full of bonuses and special feature, some beginners may find it a bit too complicated. But apart from that, we don't have any other objections. Medusa Megaways is one of the NextGen masterpieces, so don't miss to visit some of the casinos from the list above and face this ancient beast!