Inspired by tales like Aladdin and 1001 Arabian Nights, Fantasma’s Medallion Megaways is a jewel-encrusted adventure to a place of deserts, riches, and mysticism. All this in addition to the famous Megaways engine, licensed from Big Time Gaming .

As you’ll discover in our Medallion Megaways slot review below, this is one of the most unique and engaging online slots games out there right now. Continue reading below to find out what about this slot has us intending to come back and keep playing in our own free time. 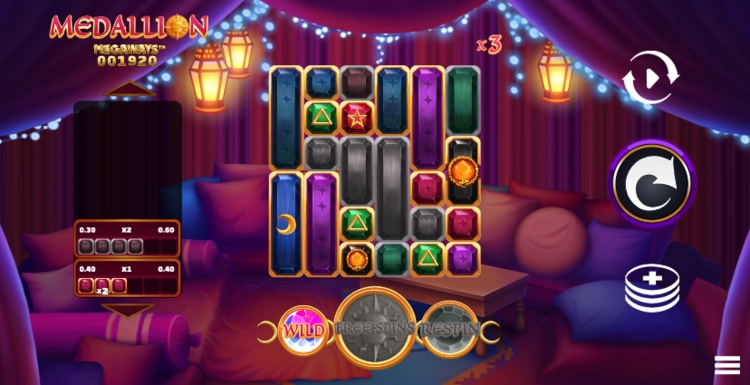 Medallion Megaways is a 6x6 reel slot that features a massive 46,656 paylines. This being a Megaways slot, this means that symbols vary in height, meaning that anywhere between 2 and 6 symbols can appear on a reel each spin.

Another staple feature of the Megaways engine that Fantasma included in their Medallion Megaways slot is cascading reels. This means that whenever a winning combination lights up, those winning symbols disappear and new symbols cascade down from above, giving the player more opportunities to record wins. This is one of our favourite features in slot games, and can make a world of difference to your bottom line as a player, especially when combined with some of the innovative bonus features below.

Players can wager anywhere between £0.10 and £80 on a single spin on Medallion Megaways, which is a wide enough range that most types of players, from the most casual to the most dedicated, should be able to find a price-per-spin that suits them. In terms of wins, players can win up to 23360x their stake, meaning there are opportunities to take home some truly massive sums.

Medallion Megaways has a base, theoretical RTP of 96.23%, but this can fluctuate between 96.16% and 96.26% depending on the game mode being played and the number of active paylines. This above both the global online slots average, as well as the Megaways slots average. This is also a medium-high volatility slot, so players that love taking a few risks while aiming for a big win will feel right at home here.

Visually speaking, Medallion Megaways is truly unique, and doesn’t really look like a slots game at all. There are no spinning reels, the play area only takes up a small part of the game window, and the symbols are all square and rectangular gemstones which just cascade down from above.

The visuals are all exceptionally detailed, and everything looks sharp, clean, and modern. Our only complaint about the visuals is that there isn’t a stark enough difference between the high paying, medium paying, and low paying gems. Sometimes the differences are so subtle that it becomes easy to misread the symbols and end up with either more or fewer wins than you had initially expected.

In fact, Medallion Megaways is so visually different from your standard slots game that players are likely going to need to let the autospin feature run for a few minutes before getting used to the game and being able to see winning combinations before the game highlights them for you.

This departure from traditional slot game visuals is by no means a bad thing, in our books, but we can imagine some more traditionalistic players being less enthused than we are by Fantasma’s unique take on the online slot game formula.

The soundtrack is catchy and definitely captures the “Arabian Nights” vibe that the Fantasma are clearly aiming for. The sound effects are all crisp and clear, and we were content to let the background music play on for the vast majority of our Medallion Megaways slot review testing.

If there’s one thing that Medallion Megaways has in abundance, it’s symbols. The game has high paying symbols, medium paying symbols, low paying symbols, a Wild, and a whole host of game-specific symbols, all of which we’ll explain either in this section, or in the Bonus Features section below.

The high, medium, and low paying symbols, as we mentioned above, are all gemstones. There are differences between them, of course, though sometimes these differences can be quite subtle.

The Wild symbol is a blue and pink crystal emblazoned with the word ‘Wild’. This only appears on reels 2 to 5, meaning they never land on reels 1 and 6. The Wild symbol replaces every other symbol that appears on the reels except for the Void Respin symbol.

The Void Respin symbol is a green crystal that can only appear if the Respin Stone has been activated by the Gold Medallion. We’ll go into more detail about this in the bonus features section below.

The Medallion symbol doesn’t actually appear on the reels, but can randomly appear at the end of any spin in the base game. It appears spinning, and if it lands on the gold side, it activates one or more of the Feature Stones. If it lands on the silver side, it deactivates one or more of the Feature Stones. We’ll get into more details about this in the Bonus Features section below, but the Medallion is one of the most important symbols in the game, hence why its called Medallion Megaways.

Fantasma clearly put a ton of effort into making this slot as unique an experience as possible, and they didn’t stop at design. Medallion Megaways has a number of different bonus features that aren’t just creative and engaging, but that also interact with each other to create a top-notch online slot game with tons of opportunities to rack up wins.

The avalanche feature is directly affected by the game’s cascading reels. Every time winning symbols disappear and new symbols cascade down, the avalanche multiplier increases by 1. This starts at a x2 multiplier after the first cascade, and has no upper limit.

Each win that’s recorded while the Avalanche multiplier is active gets multiplied by that number, meaning that the longer your Avalanche lasts, the bigger the wins get.

The Avalanche multiplier resets between rounds in the base game, which players need to keep in mind. This means that when your Avalanche is over and you move on to the next spin, the multiplier disappears and any future Avalanches start from the beginning again.

Right underneath the play area players will see three different stones encircled in gold, each of them labelled: “Wild”, “Free Spins”, and “Respin”. There’s no way to directly interact with these stones, and they start the game greyed out. These can only be activated by the Medallion symbol.

As we said above, the Medallion can randomly appear after any spin in the base game, and does something different when landing on either the Gold or the Silver side. The Gold side activates the Feature Stones, and the Silver side deactivates them.

In general, there’s an order of priority when the Medallion lands on gold and activates the Feature Stones. The Wild Stone is activated first, then the Respin Stone, and finally, the Free Spins Stone. This doesn’t mean that you need to wait for the Medallion to appear 3 times, and it not land on silver at all. The Medallion can activate (and deactivate!) several stones at once, so you can end up with all three Feature Stones activated at the same time.

This feature is activated by the Medallion symbol landing on gold and activating the Wild Stone. From this point on, all Wild symbols that appear on the reels expand to cover their entire reel, making it a lot easier to fill out paylines on winning combinations.

The Expanded Wilds also apply a random multiplier between x2 and x6 to the winning combination they’re part of. What makes this even better is that if there are multiple Expanded Wilds on a single spin, they will multiply each other. This combined with the Avalanche feature can end up racking up big wins on spins that would have otherwise been small, or even inconsequential wins.

The Void Respin feature is activated by the Medallion symbol landing on gold and activating the Respin Stone. When activated, the Void Respin symbol we mentioned above may now appear on the reels.

Whenever one or more Void Respin symbols appear, a number of symbols (between 2 and 10 per void Respin symbol) are removed, and new symbols cascade down. The replacement symbols are always the same size as the symbols they replace. Wild symbols and any symbols that are part of a winning payline cannot be removed. This is a great way to activate the Avalanche multiplier, or to extend it.

The Free Spins Round is activated by Medallion symbol landing on gold and activating the Free Spins Stone. Players are then given 10 free spins, and if they weren’t already active, the Expanding Wilds and Void Respin features also come into effect.

One great difference between the base game and the Free Spins Round is that the Avalanche multiplier does not reset between spins during the Free Spins Round, giving players the chance to build up bigger and better multipliers. The bad news, however, is that there’s no way to retrigger the feature or add any more free spins to the 10 that plaers are given at the start of the round.

When this Round ends, the Expanding Wilds and Void Respin remain activated, allowing players to benefit from these features as they continue to play (until the Medallion lands on silver, at least).

Fantasma’s Medallion Megaways turned out to be one of the more unique and engaging slots that we’ve reviewed in recent times. From the game’s completely unique visuals, to the decent RTP, and the great selection of interconnected bonus features, this online slot game certainly stands out from the crowd without sacrificing the core elements of a good slot: it’s fun, it’s engaging, and it provides players with plenty of opportunities for wins.

Our final verdict for this Medallion Megaways slot review is that we recommend you play it for yourself. We strongly believe that you’ll enjoy it at least as much as we did.