Eat, Drink and be Merry with the Matsuri Slot

Matsrui is the Japanese word for ‘festival’, and the Play’n Go slot of that name certainly has a very festive feel to it. If you’re a fan of Japanese artwork and animation you’ll find plenty to love in the game, which even includes a feature where you fish for carp!

If you want to find out all about this Japanese-themed game then read this Matsuri slot review. We’ll give you the full lowdown on this slot’s charming graphics and entertaining bonus features. Read on to find out more! 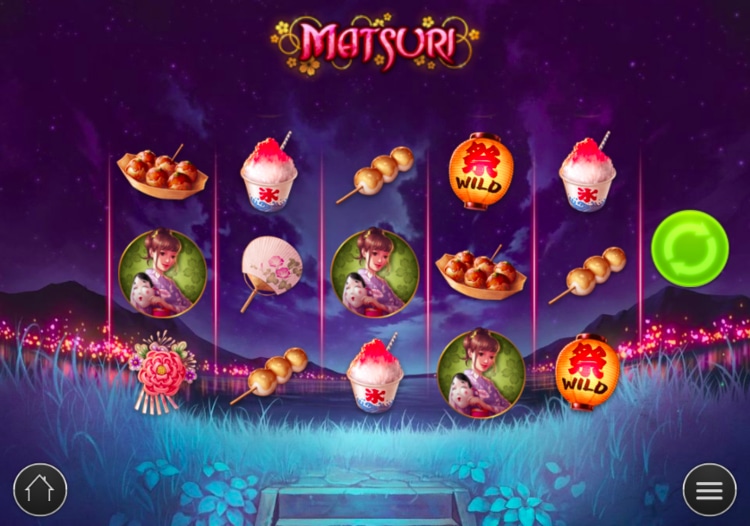 The Details About the Matsuri Slot Game

The Matsuri slot game takes its name from the Japanese festival of light, and it is certainly a brightly coloured and cheerful game. We’ll take a closer look at how it looks and sounds later on in this review. The action takes place on a grid with 5 reels and 3 rows. There are 25 fixed paylines. The game is available in 37 different languages, including Greek, Chinese and Spanish, as well as English.

The minimum bet you can place is 0.25 credits and the maximum is 100, and the maximum win exposure is 75,000 coins. The game is optimised for mobile devices, and there is an autoplay function available, if you just want to sit back and enjoy the sumptuous Japanese style graphics as the action unfolds.

What is the Matsuri Slot RTP?

The game has an RTP of 96.00%, which is perhaps slightly lower than average for a game of this type. This is exactly the same RTP as the Play’n GO slots The Sword and the Grail and Gunslinger Reloaded. While basing your slots strategy on RTP can be flawed, it is worth knowing that Matsuri is a medium volatility slot.

This means that you chances of picking up small wins frequently and large win less frequently are roughly the same. This makes it a good game for both seasoned slots veterans and novices. When playing the game we found that we picked up small wins quite often but we found it trickier to trigger the features on a regular basis.

Celebratory Sounds and Sights in the Matsuri Slot Machine

Play’n GO have done really well when it comes to the graphics and sound in the Matsuri slot. The reels float in the air in front of a night sky backdrop. In the distance, you can see the lights of a lakeside Japanese town where a festival is being celebrated. Sweeping mountain vistas can also be seen, and there is a really immersive atmosphere, helped by the ambient sound effects. These sound effects include the sound of people chatting in the streets at the festival, and some hints of the music that is accompanying the celebrations too.

There is now ongoing theme music while the game’s action unfolds, but a pleasing Japanese musical signature plays when you collect a win, which is a nice touch. The animation is very smooth and slick, and the game feels very classy when you play it. There is nothing clunky or cheap looking about the way the game looks and sounds. This attention to detail when it comes to the quality of graphics is typical of Play’n GO’s games, and you can see it in titles such as Wild Blood II and Rainforest Magic.

Immerse Yourself in Japanese Celebrations with the Matsuri Slot Game

That classy feel continues when you look at the symbols on the reels. Japanese artwork is known for its fine detail and exquisite execution, and we have to say that the symbols in this game match that tradition perfectly. The things used as symbols are all items associated with Japanese festivals. The lower value symbols are a Fan, some Ice cream, Takoyaki and some Dango Dumplings.

The higher value symbols are 3 Japanese women who are wearing traditional make-up and dress. One carries a fan, one holds a toffee apple and the third is depicted holding a mask in her hand. All 3 look charming and delicate, and the 3 depictions are very detailed indeed.

The game’s wild symbol is a Fire Lantern that can replace all other symbols to form winning combinations for you. There are also 2 bonus symbols that are used to trigger the game’s features. These are the Festival Mask and the Golden Koi Carp. We’ll have a look at how these symbols affect the game in the next section of this Matsuri slot review.

In addition to its classy graphics and slick gameplay, the Matsuri slot game also has two enticing bonus features to help draw you into its world and keep you there. We like the way that both of these features reflect the Japanese theme of the game. They have been designed with some thought, and not just inserted into the game for the sake of it.

Kingyo Sukui is a traditional Japanese game that is literally ‘scooping goldfish’. Participants in the game use a special scooper to collect fish from a pool. It might sound strange to westerners, but it’s a traditional feature of Japanese life, and you get to have a go at it in the Matsuri slot.

The Kingyo Sukui game is triggered when 3 of the goldfish scatter symbols spin in on the middle 3 reels. When this happens, you are taken to a screen where golden carp swim in a pool. You must pick them out of the water using a paper scoop. Each one you pick offers a cash prize. The game continues until you have caught all the fish or your scoop breaks.

While the kingyo sukui bonus is good fun, it is in the free spins feature where the Matsuri slot really comes alive. If 3 or more of the Cat-Face Festival Masks appear anywhere on the first, third or fifth reels then you will receive an initial 8 free spins. This number can rise, though, as more masks appear on the reels during the free spins. Each mask that appears will give you another 2 free spins up to a maximum of 20 in total.

You should also watch out for the special wilds that can fill entire reels during the free spins feature. These symbols will randomly appear and fill a whole reel, and then move to the left on consecutive spins. Wins will continue until the reel of wilds departs from the edge of the screen. This can really boost your prize pot in extra quick time.

It’s Fish, Features and Festivities with the Matsuri Slot!

Overall, this Matsuri slot review has to conclude with a ringing endorsement of this game. It looks so luxurious and delightful that it is hard to stop playing once you start. There is a real sense of a celebration in the game, with beautiful women, delicious food and an immersive night-time atmosphere all on show. The bonus features are packed with action too.

If Matsuri has whetted your appetite for Japanese themed slots then you might also want to try Net Ent’s Koi Princess, or even the intriguingly named Super Graphics Upside Down from Realistic Games. But we have to say that Matsuri should be enough to keep even the most boldly adventurous slots gamer happy for a while. Make sure you take the time to try Matsuri at your favourite online casino!

🎰What does the word Matsuri mean?
Matsuri is the Japanese word for a "festival" or a "holiday". These festivals can be secular but they are often sponsored by the local temple or shrine. Festivals of this type often take place around traditional holidays, and many areas in Japan have one in late summer or early autumn. When it comes to the Matsuri slot, Play’n GO has made sure this spirit of celebration is intrinsic to the game.
🎰What is the most lucrative symbol in the Matsuri slot machine?
The highest paying symbol in Matsuri is the Fire Lantern. This is also the game’s wild symbol. Apart from substituting for all other symbols for you, though, it can also give you big prizes on its own. The lantern can appear on all 5 reels and you will win 25x tour stake or 1000 coins if 5 symbols spin in on a payline. Look out for the lantern when playing Matsuri!
🎰Where can I play the Matsuri slot?
If you’re looking for a casino that features Play’n GO games then you should check in at this website on a regular basis. We list dozens of casino that offer you the chance to play Play’n GO titles, and there are new ones springing up all the time. We can also tell you about which casinos have the best bonuses on offer too. If you’re looking for a casino where you can play Matsuri, check back here as often as possible.