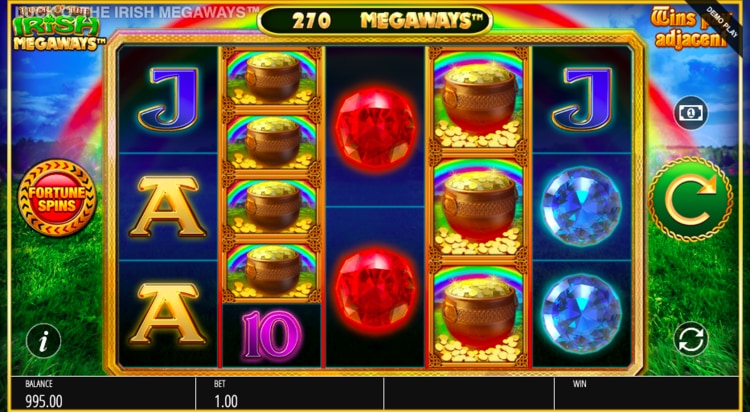 Luck O’ The Irish Megaways has 5 reels, and each one of them can hold between 2 and 7 symbol slots. The game can have up to 16,807 ways to win, which changes every turn depending on symbols layout. In case you're one of those people who like to play slots on the move, note that Luck O’ The Irish Megaways is compatible with all sorts of mobile devices. It's also available for both iOS and Android operating systems.

When it comes to the bet range, Luck O’ The Irish Megaways is mostly aimed at players on the budget. You can start for as little as £0.10 per spin, which is one of the lowest betting limits you'll ever find. The max stake is £25, so it's safe to say that high-rollers will most likely want to go and search for some more flexible slot games.

There is also a decent autoplay feature included for people who would like to avoid pressing the 'spin' button over and over again. The most you can place is 100 automated spins. There is also an option to program it to stop when you reach:

An RTP of this slot during the base game is 95%, which is something we wouldn't recommend to any of our readers. It's way less than what most of the other top slots have on offer. However, during the Fortune Spins feature, an RTP will raise to 96%. That is quite better, but still not something that blew our mind. So, we can say that when it comes to RTP, Luck O’ The Irish Megaways is slightly below the average at best.

On the other hand, it also comes with a high variance. But since the max winnings are limited at hefty 10,000x your stake on any spin, a variance like that is something we have expected to see.

Unless you're a complete beginner, the chances are you have played some Irish-themed slots before. If that's the case then you already saw everything Luck O’ The Irish Megaways has to offer in terms of graphics. There are green grasslands, a rainbow, a pot of gold and every other Irish cliché we can think of. The background is just a realistic image of grass and blue sky, without a single moving part on it.

Luck O’ The Irish Megaways doesn't bring absolutely anything new when it comes to artwork. It actually looks a bit dated, so at first glance, you may think Blueprint released this game in 2009. instead of 2019.

There is no actual music in this slot. You'll hear only silence and then some harp sounds after pressing the 'spin' button. A classic Irish tune will play only when you enter the bonus round. Luckily the market is saturated with lots of great Irish-themed games, so in case you want to chase rainbows and search for pots of gold, there are more than enough options available. Some of the most famous ones are Lucky Leprechaun by Microgaming and Rainbow Riches by Barcrest.

The most valuable symbol in the game is a pot of gold, which can bring you 1x, 3x or 5x your stake for 3, 4 or 5 matching symbols. There are also red, blue and green gem symbols, as well as a bunch of card signs that are redesigned to match the game surroundings. The Luck O’ The Irish Megaways slot doesn't feature wild or scatter symbols. Instead, it has only the Luck O’ The Irish Megaways special symbol. We will talk more about what this symbol can do in the following section.

Luck O’ The Irish Megaways comes with 1 unique bonus feature. Unlike with almost any other slot, you don't have to collect special symbol or anything like that to trigger the bonus.

The Fortune Spins round is available at any time, and you only need to press the red button on the left side of the reels to get started. You'll be presented with 4 sets of reels, with each one of them looking exactly the same as the one from the base game. Stakes in the Fortune Spins round start at 20x your base game bet.

But the best part of this game is that all of the Luck O’ The Irish Megaways symbols you land on one of the reels during the bonus game will transfer to all other reels as well. This special symbol will then transform into a random symbol for more ways to win.

This slot definitely isn't the Blueprints finest work. Everything about Luck O’ The Irish Megaways is subpar. The graphics and the sound effects are mediocre at best, but the biggest problem is almost the complete lack of bonus rounds. There is just one special feature that you can activate at will, which takes almost all of fun out of the game. If you like this approach than Luck O’ The Irish Megaways may be interesting to you. However, in any other case, we recommend you to start with some other slot game.