It’s a trip down memory lane with the Lightning Horseman Slot. Based on the classic Legend of Sleepy Hollow, Lightning Box Games has played on the theme of horror and mystery. It’s not the first online slot to use this topic and it definitely won’t be the last.  Many other software providers have produced horror slots over the years. With so many options out there, few have managed to stand out. Is this Lightning Box game one of the success stories? You’ll have to read this Lightning Horseman Slot review to find out more. 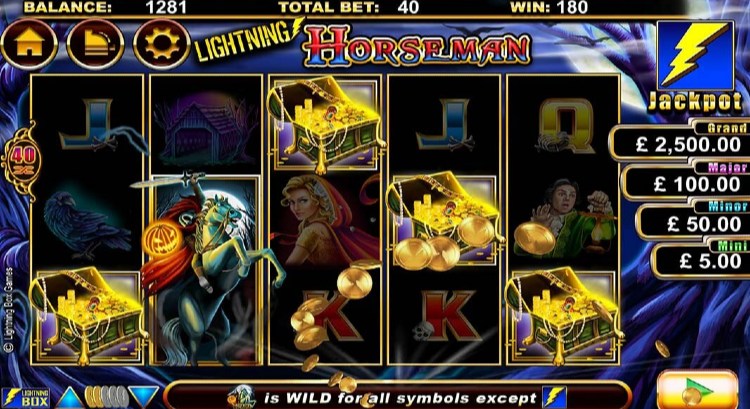 Lightning Horseman is your typical 5 reel slot that comes with 40 paylines. It’s similar to many other Lightning Box slots in terms of layout. As for the bet range, this sits at £0.40 and £50. Having launched in recent years, it’s no surprise that there is an autoplay feature. Moreover, the game has been fully optimised for mobile play.

What really sets Lightning Horseman slot apart is it’s bonus features but we’ll take a look at that later on in this review.

Coming in at 95.52%, Lightning Horseman RTP sits just below the industry averages. Compared to other slots by the same provider though, such as Lightning Box’s Chicken Fox slot, the value is similar. The difference between the two slots is actually in their variance. While the latter is considered highly volatile. Lightning Horseman is a medium to high variance slot.

The slot is based on The Legend of Sleepy Hollow and the audiovisuals aim to tell the tale. The graphics are cartoon-like yet mysterious at the same time. This is mostly down to the use of crows, empty houses as well as the headless horseman. Even the base game symbols are animated with skulls to instil a sense of spook. The slot itself is set in a forest at nighttime which again ties back to the main theme.

While the graphics create the setting, what really stands out is the Lightning Horseman slot’s audio. If you’re used to playing slot games with a repetitive jingle, then this will come as a breath of fresh air. The soundtrack is generally dramatic with clips like howling wolves to send shudders down your spine.

This is a slot that promises horror and in terms of graphics and sound, Lightning Box deliver.

The game has both a wild and a scatter symbol.  The wild is represented by the Lightning Horseman himself and substitutes all other symbols except the scatter. The latter is represented by a Lightning Bolt symbol. Landing a set number of these will trigger some interesting bonus features which we’ll take a look at below.

Landing anywhere between 6 and 13 scatters will trigger the Lightning Respin feature. As the name implies, players will receive 3 initial spins. All Lightning Bolts are held in place throughout the respins. For each subsequent Lightning Bolt symbol landed, the respins reset to 3 and all scatters remain in place. Once completed, all remaining scatter symbols are flipped to reveal prizes. It’s worth pointing out that not all Lightning Bolts that are flipped will generate winnings.

There’s actually more to the Lightning Respin round. Collecting a total of 15 Lightning Bolts will trigger a Flippin’ Retrigger. What this feature means is that all Lightning Bolts are reflipped. This time round, all symbols will show a winning amount.

That’s not the only perk of these Lightning Horseman slot bonus feature. Players are also in with a chance of being awarded a Lightning jackpot but more on this below.

It’s worth pointing out that we’re not referring to progressive jackpots here. Jackpot prizes are fixed and not influenced by the amount you bet. Still the odds of being awarded a jackpot will increase with higher bets.

There are 4 possible jackpot prizes that can be revealed when a Lightning Bolt is flipped. We’ve listed them below.

The first three can be won multiple times during a bonus round. The Grand Jackpot on the other hand is a much higher amount but it can only be won once in every bonus.

As far as horror slot games go, Lightning Box has done an impeccable job with this one. We’ve seen this several times in our Lightning Horseman slot review. Many will be familiar with the Legend of the Sleepy Hollow and the slot tells the tale perfectly. Cutting edge audio visuals are only one side of the story. The game also boasts some interesting bonus features. Triggering them may require some patience but with up to 37,500x your bet up for grabs, it’s well worth the wait.