5.0
/5
888 Casino
No Deposit Bonus
£88
Deposit Bonus
100% up to £100
CLAIM
No Deposit Offer: New players only • £88 is granted in FreePlay (FP) • FP must be claimed within 48 hrs of receiving the email and expires after 14 days • FP wins are credited as bonus and capped at £15, exc. JP win General withdrawal restrictions & full T&Cs apply: No Deposit Offer terms. Full T&Cs Here
Details
No Deposit Bonus

Something that will have seasoned slots players nodding their heads in agreement is the statement that game developers like leprechauns. Leprechaun’s Luck is another of those slots that takes players to a surreal version of Ireland that is populated by strange little men in green, rainbows and pots of gold.

Does it stand out from a crowded field when it comes to Irish-themed slots, or is it just another run of the mill attempt to cash in on Celtic legends? This Leprechaun’s Luck slot review will tell you all you need to know! 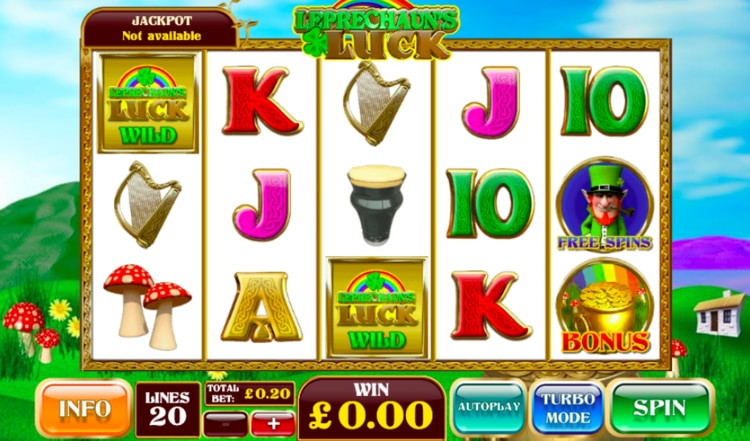 The Leprechaun’s Luck slot is played on a grid of 5 reels and 3 rows. There are 20 paylines in place. You can set you bet levels in the game from a minimum of 20p per spin up to a maximum of £100. This seemed to vary between the operators that we looked at, though, so always make sure you check this with the customer service team at your favourite online casino if you are in doubt. The maximum jackpot prize on offer is 10,000x your stake.

There is an autoplay feature in Leprechaun’s Luck slot if you like to watch the action rather than take a more active role in the game. You can set this to run for between 5 and 25 spins. It can also be set to finish when you lose a certain amount or to stop when you record a win of a certain size. It will also stop if you snare the game’s progressive jackpot. An info tab in the bottom left corner of the screen is another handy feature. This provides useful detail about the game’s bonus features.

Other slots from this developer that have a low RTP rate include X Factor Jackpot (92.35%) and War of the Worlds (93.55%). It is worth stating, though, that we did see some operators that gave the RTP 91.31%. The game itself states the RTP given above, however.

The game is medium variance. It can be played on a wide range of mobile devices, thanks to its use of HTML5 technology. As we alluded to above, there is also a progressive jackpot that you can win while playing this slot. We’ll give you full details about that later

Step into a Bright, Fresh Vision of Cartoon Ireland

The Leprechaun’s Luck slot looks bright and fresh without being especially sophisticated in terms of its visual design. It has a very clean appearance, with very little detail cluttering up the screen. It does have a very simple appearance, though this does not detract from the overall quality. The reels sit in front of a verdant Irish cartoon landscape. Vivid green fields foreshadow purple mountains, and there are some red and white spotted toadstools and dandelions to provide some extra colour.

There are some nice ambient sounds that play in Leprechaun’s Luck too, such as birdsong and bees buzzing. These effects sound good and add a nicely immersive touch to the proceedings. Harp refrains sound occasionally when events occur in the game, such as a win being recorded. The music is unobtrusive, and there is no irritating musical theme playing constantly.

Enjoy a Foaming Pint of Stout

The symbols on the reels in Leprechaun’s Luck are all items associated with the theme of Irish luck. They look sharp and clean without being overly complex, and they certainly possess significant visual appeal. The lower value symbols are the usual set of letters and numbers associated with playing card values. When it comes to higher value symbols, you will see gleaming black pints of stout, toadstools and an Irish harp.

There are also a number of special symbols to watch out for in Leprechaun’s Luck. The game’s logo is its wild symbol, and there is also the pot of gold bonus symbol and the free spins symbol, which are 2 of the game’s scatters. A wishing well bonus symbol completes the line-up of 3 scatter symbols. We’ll look at how all of these special symbols can help you in the next section of this Leprechaun’s Luck slot review.

The Leprechaun Offers a Wealth of Bright Bonuses

As you might expect from an Ash Gaming slot, Leprechaun’s Luck slot comes packed with entertaining bonus features. It might have a simple look to it, but this game can certainly deliver plenty of fun, as well as the chance to boost your winnings. Find out how in this section. Before we start, remember that that 3 symbols act as scatters. This means that there is a lot to look out for on the reels when it comes to identifying features.

One thing about the Leprechaun’s Luck slot game that we really liked was the Rainbow of Wealth bonus. You gain entry to this mini game when 3 or more of the pot of gold symbols appear anywhere on reels 1, 3 and 5. The screen changes, and displays a rainbow trail on which several multipliers can be seen.

This Leprechaun’s Luck slot bonus is triggered whenever the wishing well symbol appears on the middle reel during the base game. Again, the reels disappear from the screen and you are shown instead a wishing well into which a bucket descends.

You cannot control the bucket, sadly. As the bucket descends into the well, it collects cash prizes for you. The feature ends when the bucket reaches the bottom of the well and all the cash prizes it has collected are awarded to you. You can also win the Leprechaun’s Luck progressive jackpot via this feature.

The free spins bonus is triggered when the scatter appears anywhere on reels 2, 4 and 5 simultaneously during the Leprechaun’s Luck slot base game. The leprechaun awards a random number of free spins when the feature starts. He will also blow smoke from his pipe. The smoke then forms numbers which are the amount of free spins you receive. This happens several times and all the numbers he produces are added together.

After he has awarded the spins, he jumps across the reels. In every position on the reels in which he lands, a wild will appear, and this will remain in place for the duration of the free spins. An enhanced set of reels is used for the free spins in Leprechaun’s Luck. This boosts your chances of bigger wins, but all the scatter symbols are removed from them.

There are 2 ways to snare the progressive jackpot prize in the Leprechaun’s Luck slot. If you are lucky enough to find a pile of gold at the bottom of the wishing well in the Wishing Well bonus feature then you’ll win it. You can also win it if all the colours of the rainbow are lit up in the Rainbow of Wealth bonus game.

This Leprechaun’s Luck slot review will conclude on a very positive note. When we first played this game we were concerned that it was just another Irish-themed slot with not much to distinguish it from the crowd. In actual fact, we discovered that this is a game that packs a real punch with its bonus features. Its graphics are also deceptively good, and it offers quite an immersive atmosphere to players. The presence of a progressive jackpot also adds an extra layer of excitement.

If your tastebuds have been tickled by a few pints of the leprechaun’s stout then you might also want to try Rainbow Riches from Barcrest. Irish Riches Megaways from Blueprint Gaming is also worth a look.