Legendary Excalibur is a slot from British developer Red Tiger Gaming. Set in a world of Arthurian mystery, it is a pretty basic slot that nevertheless provides a decent amount of entertainment, as well as an interesting use of wild symbols.

So read this Legendary Excalibur slot review to see if this game truly transports you to the misty mysteries of Avalon and Arthur, or just leaves you standing on the shore of the lake waiting in vain for the Lady to appear and offer her sword. 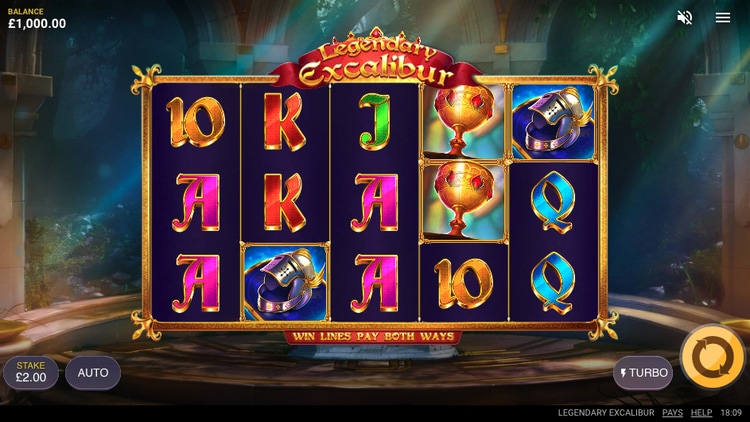 Key Details of the Slot Game

The Legendary Excalibur game is played on a grid with 5 reels and 3 rows. There are 10 paylines in operation, and they run from left to right and right to left. The maximum multiplier for a winning spin is 500x. The minimum stake is 20p and the maximum is £200, if you are playing in the UK. As you would expect, the game is optimised for play on mobile devices and makes use of HTML5 technology.

There is plenty of additional information that you can access via the tabs on the screen during play too. The Pays and Help tabs in the bottom right corner of the screen provide all the detail you need about the worth of each symbol and the structure of the paylines. You can also find information about how the game’s bonus features work here.

The Legendary Excalibur RTP is given as 95.66% by Red Tiger Gaming. This puts it a little on the low side for a slot of this type. Other Red Tiger slots with a similar RTP include Atlantis, which has an RTP of 95.77%, Cinderella (95.35%) and Three Musketeers (95.15%). If you like to base your slots strategy on the stats, then you will also need to know that the game has medium volatility with Red Tiger awarding the game a score of 3 out of 5 for this characteristic.

The game was released by the developer in December 2019, so is a very new entrant onto the market. There is an autoplay feature that has several settings. You can set this to stop if your winnings reach a specified amount, or if the bonus feature is triggered.

When it comes to how the Legendary Excalibur slot game appears, it looks slick and smooth without being particularly striking. The quality of the graphics is definitely above average, but there is nothing about them that particularly sticks in the mind when you have finished playing. The reels are set in a golden picture frame that hangs in front of a grey castle wall. There is very little additional detail to help draw you into the world of the game, and we were left a little underwhelmed by the slot’s appearance overall.

The sound effects left us with a similar impression. A nondescript tune plays when you open the game, and it continues while the reels spin, unless you choose to mute it. There are no other significantly interesting aspects of the game when it comes to sound. Little flourishes of music play when you record a win on the reels but, once again, there is nothing especially distinctive about these effects.

Watch out for Stacked Arthur Sliding onto the Reels

The symbols on the reels are detailed and look sharp but there is little that is really outstanding or distinctive about them. The lower value symbols are the usual array of letters and numbers, so you’ll see 10, J, Q, K and A on the reels. The higher value symbols are all items associated with the legend of King Arthur. You’ll see Arthur himself, as well as a goblet that could be the Holy Grail. There is also a helmet and a rose. Arthur can appear stacked on the reels.

The game’s wild symbol is the enchanted sword Excalibur. It is stacked, taking up 3 spaces on the reel on which it appears. It can substitute for all other symbols to create winning combinations for you. It also plays a role in the game’s main bonus feature, something that we’ll look at in the next section of this Legendary Excalibur slot review.

Bonus features are another aspect of the Legendary Excalibur slot that left us a little underwhelmed. It is usual these days for slots to offer at least a free spins bonus, but this game does not even offer that. There are some alternatives available, and we’ll look at them now, but this is not the slot for you if you like games that are packed with interesting and entertaining extras.

The game’s main feature revolves entirely around the Excalibur symbol. This wild symbol will not just replace other symbols to create new winning combinations for you, it will also trigger respins if it appears in its stacked form. If it lands in its standard form or its stacked form it can also bring you a valuable win in its own right. If 5 wilds land on a payline, you win a prize worth 500 coins. For 4 of them, it’s a prize worth 150 coins and for 3 you’ll receive 50 coins.

But the main attraction of the stacked wild appearing on the reels is the way that can trigger respins for you. When this happens, additional wild symbols are also scattered about the reels as they respin. This can create new winning combinations for you. If 3 wild symbols fill the visible spaces on a reel then they will turn into a stacked wild and you will receive another respin.

Overall, we have to say that we were disappointed with the lack of any real features in this slot. While the shower of wilds is an interesting feature, it lacks any real depth and provides relatively little in terms of entertainment. Playing this game left us with an underwhelmed feeling and a sense of disappointment that there was not more substance to get our teeth into.

We have to say that we were left a little disappointed with this slot overall. We found the lack of any real bonus features a little baffling, and it certainly limited the range of entertainment that this game offers. There was little in the graphics and sound that could compensate for this disappointment either. Everything about the game felt a little flat, and a long way from the mystery and magic of the Arthurian legends.

So this Legendary Excalibur slot review must end on a negative note, by recommending that you try other Arthurian slots, such as King Arthur from Microgaming, and Excalibur from Net Ent. They offer much more in terms of bonus features and all-round entertainment.

🎰Are there any free spins on offer at all in the Legendary Excalibur slot game?
Sadly, we have to report that there is no free spins bonus feature available for you to claim in this slot. The closest that you will come to triggering some free spins is when the stacked wild gives you one respin. You can repeat this respin with a bit of luck on your side, and the shower of wilds that results from a stacked wild appearing can bring big rewards, but there are no true free spins available.
📊What is the most valuable symbol in the Legendary Excalibur slot?
This game is all about the Excalibur symbol. This wild symbol will trigger the game’s only real bonus feature and it can appear as a 1x3 stack. If 5 of it spin in on a payline you will receive a prize worth 500 coins. You can find a full rundown of what each symbol is worth in the game’s paytable, which is easily available during play by clicking on the ‘Pays’ tab beneath the reels.
💷What is the maximum payout in Legendary Excalibur?
Legendary Excalibur slot gives players the chances to win up 500 times their stake per spin. This will however involve filling all 5 reels in the game with stacked wilds. We recommend looking to trigger the Respin feature in order to increase your chances of landing such a winning combination.

The Sword and The Grail Slot Review