Legend of the Pharaohs Slot Review 2022

Legend of the Pharaohs Slot Review

Ancient Egypt remains an enduringly popular setting for slots games. There are hundreds of slots that use pyramids, deserts and dog-headed gods as source material. Barcrest’s contribution to the genre is Legend of the Pharaohs, a game that is stuffed with entertaining bonus features.

This Legend of the Pharaohs slot review will take a closer look at this game for you. You can find all the details you need to know about every important aspect of this slot. Read on to find out more! 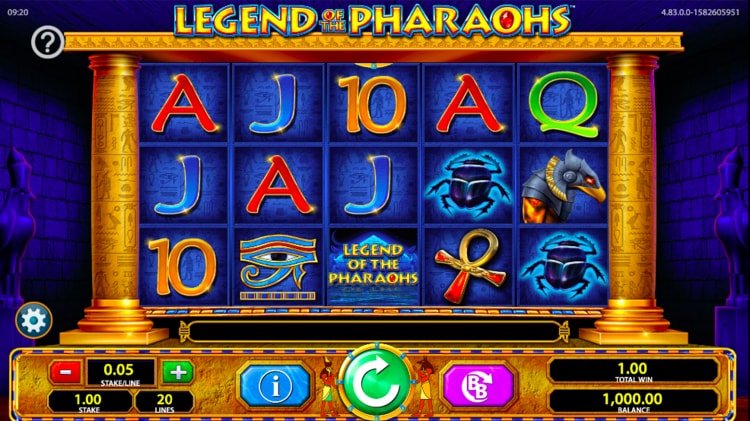 The Legend of the Pharaohs slot game is played on a grid with 5 reels and 3 rows. There are 20 paylines, and the game looks just as good on mobile devices as it does on your desktop computer. This is because it uses HTML5 technology, something that means the game can be played on a variety of devices of different sizes. The minimum bet UK players can place is 20p and the biggest is £100. The game was released in April 2017, so players have been able to enjoy it for almost 3 years at the time of writing.

What is the RTP of the Legend of the Pharaohs Slot Machine?

The RTP of the Legend of the Pharaohs slot machine is 96.01%. That figure can vary, though, as you can also play the game using its Big Bet feature. We will examine this in closer detail later on in this review, but when you’re playing using this feature the RTP rises to 98.01%. Those figures are pretty typical of a slot of this type, and also fairly typical for a Barcrest game. Dr Jekyll Goes Wild, another Barcrest slot, has an RTP of 94.20% to 98.20%, while Flame of Fortune runs from 93.64% to 98.00%.

Of course, basing your slots strategy entirely around RTP is a mistake. If you like to use stats in your strategy, it might be more useful for you to know that this game has a medium variance. That means that your chances of frequent small wins should be about the same as your opportunities to take home infrequent big wins. Our own experience of the game seemed to bear this out.

This Legend Lacks Lustre When it Comes to Design

The setting for the Legend of the Pharaohs slot game is, as you might expect, an Egyptian tomb. The reels stand in front of a blue, subterranean scene, with statues of gods placed on either side of them. The graphics are not especially impressive and lack detail, but they are far from the worst that we have seen.

When it comes to the symbols on the reels, the standard is similar. While the symbols look okay and are detailed enough for you to see what they are, they do not look especially impressive. The lower value symbols are the usual numbers and letters associated with playing cards. The higher value symbols are all associated with Ancient Egypt, so you’ll see the Eye of Ra, the god Osiris, a scarab beetle and an ankh, as well as the game’s logo.

The game’s wild is the word ‘Wild’ and it will appear only on reels 1, 2 and 3. It can substitute for all other symbols to create winning combinations for you, apart from the blue and red scatter symbols. We’ll look at those in the section about this slot’s bonus features.

The music is dramatic and has an Ancient Egyptian feel to it. It is very irritating after a while, though. A refrain is repeated when you record wins that really grated on our nerves. The mute button really is your friend in this game, we have to say.

Overall, the game looks solid and competent, rather than sparkling and superb. We have seen games that look much worse than this, but we have also seen better ones. Thankfully, the bonus features more than makeup for the sounds and sights of the game, and we’ll take a closer look at them next.

There are two bonus features in the Legend of the Pharaohs slot game. The first is a free spins feature, while the second uses the concept of Big Bet. We’ll take a detailed look at both of these features here.

To trigger the free spins feature, 3, 4 or 5 of the blue pyramid scatter symbol need to appear on the reels. If 3 scatters appear, you will receive 10 free spins with 1 added bonus. For 4 scatters, you receive 10 spins with 2 active bonuses. If you’re lucky enough to see 5 scatters, you get 3 bonuses to complement your spins. There are 4 possible bonuses that can be applied to your free spins. These are:

As well as the blue pyramid scatter, there is also the red pyramid symbol.  When this appears, the spins are retriggered with added bonuses depending on the number of red pyramids that appear. You are given the choice of continuing with your current number of free spins and the attached bonus or swapping for the new spins and bonus that the red pyramids have brought you.

You also have the opportunity to click the ‘Best Stategy’ button. This will highlight what looks to be the best option for you to take. If you select the highlighted bonus you are more likely to generate higher returns, but this is not guaranteed.

This Pyramid is Packed Full of Features

We quite liked Legend of the Pharaohs, despite its limitations when it comes to graphics and sound. There are certainly lots of things to enjoy if you have a spin on this game. So this Legend of the Pharaohs slot review concludes on a broadly positive note. This is not the most impressive looking game that we have ever seen. Astute slots players can certainly find plenty of entertainment and potential profit in its bonus features. If you enjoy Egyptian themed slots then you might also want to try Book of Ra from Novomatic, or Riches of Ra from Play’n GO.

Legend of the Pharaohs Slot FAQs

🎰Is there a Legend of the Pharaohs slot free play option available anywhere?
If you want to play a Legend of the Pharaohs slot demo mode version then check at your favoured online casino. Most online casinos will allow members to play slots for free in demo mode. This is a very useful way of sharpening up your strategy before risking any real money. Check our list of casinos that feature Barcrest slots and you should be able to find one to suit you.
🎰What is the most valuable symbol in the Legend of the Pharaohs slot machine?
You can find out all the relative values of symbols in this slot by clicking on the game’s information tab. You can find a full pay table by doing this. The most lucrative symbol on the reels is the game’s logo, which is worth 100x your bet if 5 appear on a payline.
🎰Why does the Legend of the Pharaohs slot game have varying RTP rates?
The differing RTP rates are due to the game having a Big Bet feature. A further variation is also added by the presence of the Best Strategy button. This leads to a situation where the game’s RTP varies according to which aspect of it is currently in play. The game is fair in the way that it approaches this, though, so you do not need to worry that you are being cheated.