Medieval times have always been an inspiration for writers, filmmakers and casino developers alike, so seeing a slot like this wasn't that big of a surprise. With Knight's Life, Merkur tried to bring back the times of chivalry, castles, swords and armours, and pack it inside of a fast-paced slot. But have they succeeded to make a casino game worth of playing, or this is just another below-average title?

To get an answer to this question, check out our Knight's Life slot review where we reveal everything you need to know about this exciting Merkur game. 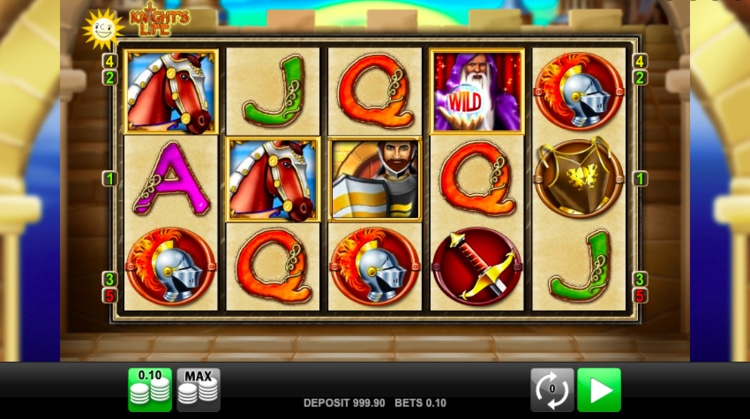 Knight's Tale has 5 reels in 3 rows, which is a most used set up these days. However, when it comes to the paylines, this Merkur game has surprised us - but not in a good way. It features only 5 ways to win, making it a slot with the lowest number of paylines we have reviewed in quite some time. This isn't a major red flag, but it definitely puts Knight's Life below some of its main competitors, such as Forsaken Kingdom by Microgaming and IGT's Golden Knight.

You can bet anywhere between 0.05 and 10 coins per spin. There is no way to reduce the number of paylines you play, meaning that all 5 of them will be on during every spin you take. If you get tired of spinning by yourself, just click on the autoplay button in the lower-right corner. Max number of auto spins is 100, which should be enough for most of the casual players.

Knight's Life brings a couple more bad surprises. It has an RTP rate of just 95,84%, which is below an industry average. Since this game doesn't feature a progressive jackpot or any other colossal prize, there is no real excuse for an RTP to be this low. However, note that RTP only makes a difference if you spin the reels at least several hundreds times, meaning that casual players should not worry too much about all of this.

On the other hand, Knight's Life slot machine has high volatility, so you most probably won't score a lot of winning paylines. But when you do, it's more probable that the cash out will be on the higher end. So if you plan to win anything on this slot, be prepared to spin the reels more than a few times. When we tested Knight's Life, there were an awful lot of spins where just nothing happened.

Knight's Life Graphics and Sound Effects - Not So Great

This game was first released in 2013, but when we started playing, our impression was that it had been made at least a couple of years earlier. All the graphics have a cartoonish look, but they feel very basic. Almost like the designers haven't put that much effort in making them.

The background seems to be an interior of a castle, but you really can't tell much since it's very blurry. We weren't too impressed with the graphics and design of Knight's Life slot since it looks just too old fashioned for today's standards.

Merkur totally missed out with music in this slot. There are sounds only when you spin the reels, but they seem more like random upbeat slot noises than the actual musical background. There isn't a single audio effect that feels medieval. It's all just a bunch of generic slot sounds.

Both the audio and visual side of this slot is in every way subpar to almost any newer game produced by industry-leading companies such as NetEnt and Microgaming. But this isn't a surprise at all since all Merkur games follow the same minimalistic approach. So if you already like titles such as Eye of Hours or Vampires, you may just fell in love with the simplicity of Knight's Life.

As you could probably guess by now, most of the symbols here are inspired by the medieval objects, so you have knights, helmets, shields and castles spinning on the reels. Most of the symbols are custom made, which is a good thing, even if the graphics are not exactly the best we have seen. The low-value symbols are card signs, but they have all been redesigned to match the overall look of the game.

Wizard Merlin is the game's wild, and it substitutes for every other symbol to create a winning payline. But note that every time wild substitutes in a winning line that win would be doubled! There is Horse scatter symbols as well. Its primary purpose is to trigger the Knight's Life bonus game, but more on that in the following paragraph.

Knight's Life slot features only 1 bonus round. If you're lucky enough to get 2 or more Horse symbols, you'll trigger free spins feature that can get you up to 30 free spins. Most of the bonus spins rounds come with the multiplier, meaning that once you're in, massive winnings are almost certain. Still, keep in mind that this is a high variance slot, so bonus rounds wouldn't come that often.

This is how the Knight's Life bonus feature works:

Note that starting from the 6th free game all the winnings are multiplied by 2, while form 11th bonus round onwards everything you get is multiplied by 3. Free spins can be retriggered, so keep a close look on those Horse symbols even during the free spins!

Knight's Life looks and feels very basic and old fashioned both in terms of design and features. Many players accustomed to new games that are usually shiny, vibrant and full of complex bonus rounds, would find this Merkur slot to be dull and unexciting. But in case you're one of the people who cherish the simple and fast-paced games, Knight's Life will not disappoint you. This is a classic example of Merkur style slot with all of its ups and downs. So if you're into these kinds of games, don't miss to take Knight's Life for a test ride.

🤔What is Knight's Life RTP?
Knight's Life has an RTP of 95.84%, which is below the industry average of 96%. This won't affect the casual players, but if you want to spin for an extensive period of time, then it would be better to switch to some of the slots with higher RTP. If you don't know where to find games like that, visit our page about top slots in the UK.
🎰Is there a free spins feature in Knight's Life slot?
Yes, there is. To trigger free spins, you'll have to land at least 2 Horse scatter symbols. Also, note that all winnings after the 6th round come with 2x multiplier, while the winnings after 11th bonus game are multiplied by 3. This is how it works:
▶️Where can I play horse Knight's Life slot?
You can play Knight's Life slot at almost any of the Merkur casinos in the UK. We suggest you check out some of the operators from the list at the beginning of this review since all of them are tested by our experts and thus 100% reliable.