One of the many DC Entertainment licensed titles available at Playtech, Justice League certainly packs a super-sized punch. Based on the 2017 movie of the same name, this Playtech-powered slot will have you donning your own mask and cape and taking on hordes of Parademons in no time.

The question everyone really wants answered by the end of this Justice League slot review, though, is whether or not the slot is better than the movie was. Read more below to find out! 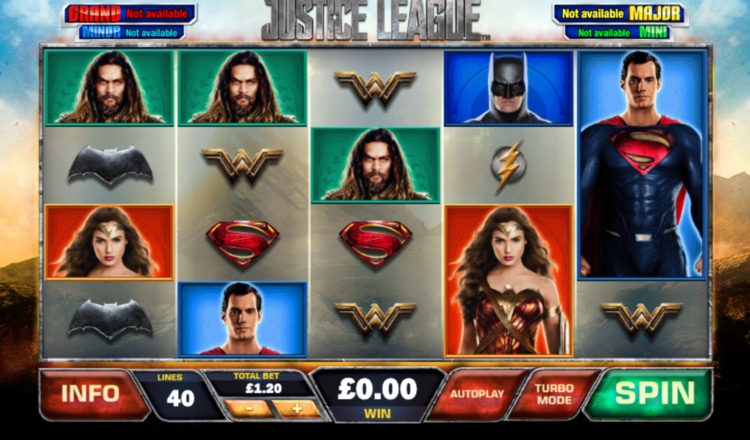 Justice League is a slot with 5 reels and 40 paylines, giving players plenty of winning opportunities. While it might not be an audio-visual stunner, the game has more depth than it lets on, which we’ll explore in more detail below.

This slot is playable from £0.40 to £500 on a single spin, so both casual players and high-rollers alike can have their fun.

What draws most players to this slot is that the star-studded cast of 6 main superheroes can end up staked up to 3 rows high. Even though there are 40 paylines, it still isn’t uncommon to win 15x or 20x your stake on regular spins, which is a testament to the solid slot machine mechanics powering Justice League.

When it comes to online slots, one of the most important things to consider is the RTP, which stands for “Return to Player.” Justice League has an RTP of 96.33% at most casinos, making it a high-volatility slot. Justice League is in good company here, with other famous slots like Book of Dead and Immortal Romance also being high-variance slots.

What that means, in layman’s terms, is that while wins aren’t exceptionally frequent, they tend to be larger than your average slot. As we said above, we’ve had wins of 15x or 20x our stake on normal spins, outside of bonus rounds.

In terms of visuals, Justice League stands out, though doesn’t exactly impress. As we said above, the high-paying symbols are photos of the characters from the film’s promotions. The visuals aren’t ugly or disappointing, by any means, though all of the assets are pulled straight from the movie’s promos, and are reminiscent of Flash-powered browser games from the early 2000s.

The soundtrack, on the other hand, is actually disappointing. You’ll likely find yourself reaching for the mute button and opening up Spotify when sitting down to a long Justice League session. It’s a moody, orchestral soundtrack that's jarringly interspersed with what sounds like stock “slot noises”.

While Justice League by Playtech might not be a spinning work of art, it’s stimulating enough to keep you engaged as long you mute the tab it’s playing in.

Straight out of a Comic Book

There’s no mistaking Justice League for any other slot. From the very first glance, this slot screams “superheroes”. While other superhero slots might stick to a more cartoony, comic-book aesthetic, the grit and reality that the movie is known for carries through to the slot game.

The low win symbols are the Batman’s, Superman’s, Wonder Woman’s, and The Flash’s emblems, the iconic symbols that they wear on their chest plates and belt-buckles. The most valuable among them being Batman’s, and the least valuable being The Flash’s. The high-win symbols are photographs of the main cast of superheroes that make up the Justice League. These can take up anywhere from a single spot on the reels to an entire reel.  In terms of value, here they are in descending order:

While the soundtrack wasn’t very “super”, we were very pleased to discover that Justice League is packed with bonus features. Some are random, some are activated by Scatters, and some are unlocked by continuous play. If you’re looking for an engaging and diverse slot, Justice League just might be right for you.

The Wild symbol is the signature “JL” logo used to promote the Justice League movie, and substitutes all other symbols except for the Scatter. The Wild can appear on any reel, and can take up an entire reel. Some of our biggest wins on Justice League have been thanks to spins that were extremely generous with Wilds.

The Scatter symbol is a cube that comes in three different colours (bronze, silver, and gold) that can appear on reels 1, 3, and 5. All three scatters need to appear to activate a bonus feature, but more on that below.

This is a completely random feature where every now and again, with no warning, the bottom case in the 5th reel becomes ringed with lightning. If a high paying symbol (i.e. one of the Justice League members’ photos) ends up in that space, then all instances of that symbol on the reels are converted into Wilds until the feature ends.

If the first Super Hero Respin is successful, the feature gets reactivated, and the symbol from the first round continues to come up as Wilds. This will continue until a Wild or a low paying symbol ends up in the lightning box up to a maximum of 5 free spins. While there were plenty of times our Respin yielded no to low results, there were also a few times where we ended up with 3 or 4 high paying symbols coming up as wild and reaping some huge rewards because of it.

As we said above, the Scatter symbol is the cube (called a “Mother Box” in the movie) used by villain SteppenWolf to try and turn Earth into a new Apokolips. While that might sound very nefarious and scary, trust us when we say that you’re going to want to see as many of these cubes as possible in the Justice League slot.

The Scatter can appear on reels 1, 3, and 5, with reels 3 and 5 spinning dramatically and lighting up if the Scatter has appeared in one of the earlier reels. Whenever all three Scatters show up together, the Justice League free spin bonus is activated.

Each of the 6 heroes has their own version of a bonus round, and you unlock each of them as your progress through the game. The first time the Scatters all appear, you’ll only be able to play The Flash free spins, but each time the Justice League free spins bonus activates, another character’s mode will become available until you finally have access to all of them.

Every one of the six different heroes’ versions of the free spin bonus includes some variation of the Super Hero Respin, and each new hero you unlock presents you with a more volatile and riskier free spins bonus round. As the volatility rises with each hero, though, so do the potential rewards.

While every player is going to have their own preference, the sweet spot for us is Aquaman, as there are plenty of free spins as well as plenty of opportunities to turn symbols into wilds as the only hero to turn low paying symbols into wilds too. Wonder Woman is a great alternative as players still have more than a handful of free spins, and more highlighted cases for symbols to fall into.

Normally when a slot has a progressive jackpot, that’s one of the first things we mention and one of the core focuses of the slot review. The DC Superheroes Jackpot is a different story, though. This is a jackpot that’s shared amongst a number of different DC-licensed slots by Playtech, like 1978 Superman Slot or the Suicide Squad Slot.

The jackpot doesn’t trigger very often, unlike with dedicated progressive slot games, and when it does trigger, it triggers completely randomly. If it does trigger, you’ll get to take your pick from a 4x5 grid of cases, and can win one of four jackpots:

As it triggers so rarely, it doesn’t affect Justice League’s RTP, but it’s a nice bonus to be thrown into an already excellent slot game. The Grand jackpot’s last few wins were all well over the £1 million mark, and this just gives us yet another reason to keep coming back for more.

While this isn’t the first online slots game to be based on the iconic Justice League (the other version is based on the DC comic book), this is certainly our favourite iteration. Sure, we can’t bring ourselves to listen to the soundtrack for very long, but other than that, this really is a top-notch slot.

All we can really say to cap off this Justice League slot review is, if high volatility slots with truly super bonus features are your speed, then you should definitely give Justice League a spin.