This slot, based on the 2015 Jurassic World movie starring Chris Pratt and Bryce Dallas Howard, manages to keep things simple, while still having enough features to keep players engaged and coming back for more. Microgaming have done an excellent job of marrying tried-and-tested slot mechanics with one of Universal Picture’s most popular movies ever. 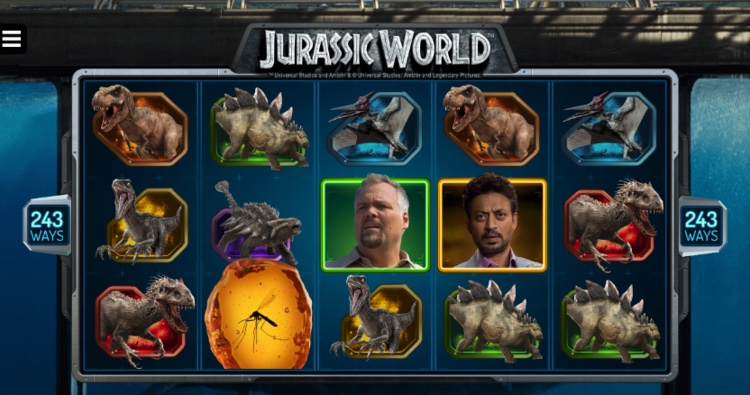 Microgaming’s Jurassic World online slot game is played across 5 reels, with 243 paylines. This means that players have lots of opportunities to rack up wins as they play, without having to worry about understanding overly complicated slot mechanics. Players can wager as little as £0.30, and as much as £18 on a single spin.

Microgaming’s Jurassic World slot has a theoretical RTP of 95.45%. This is what we’d consider to be a medium volatility slot, which means that small wins are relatively common, medium wins happen on occasion, while bigger wins are still possible.

Jurassic World by Microgaming looks a lot like every other Hollywood tie-in slot game out there. Rather than original artwork or music, everything seems to be ripped directly out of the promotional materials for the movie.

This isn’t to say that it looks or sounds bad, but that much like other games, such as Playtech’s Suicide Squad Slot, that character stills and the official theme song make the game feel a little cheap.

The lack of transition animations, such as the ones found in Thunderkick’s Pink Elephants slot game, make the move from main game to bonus round a little jarring, while the fact that the play area doesn’t visually change very much between the main game and the three different bonus round locations is a missed opportunity.

The main game’s background music is slow, quiet, and melodical. The volume, in comparison to the actual slot noises such as the spinning reels or registered wins, is low, and it’s clear that it was intended as background music. This makes it much easier to play the game for long periods of time, as it becomes easy to forget that you’re listening to a single track on a loop.

The Wild symbol, as is often the case, can substitute any other symbol except for the Scatter. The Scatter is a little more, interesting, though. Three scatters activate a bonus feature, as is standard in a lot of other slot games. Two Scatters, however, will act like Wilds, which takes the sting out of those near-misses.

Microgaming’s Jurassic World slot has a whole host of bonus features to keep you engaged and to help you rack up wins. From the Scatter-activated bonus rounds to the random dinosaur attack bonus, you’re unlikely to get bored while playing the Jurassic World online slot game.

This is randomly triggered in the slot’s base game. When an Indominus Rex appears in front of the reels, be ready for a huge win. The Indominus feature can multiply your win by up to 1000x your wager.

Bear in mind, though, that this is completely random. It can appear on any win that’s between 3x and 50x your wager, so there’s no predicting when it will appear, or what kind of bonus multiplier it will grant you.

The other bonus features are slightly less random. These are activated when at least three of the Amber Scatter symbols show up on the reels. When this happens, you’ll randomly be taken to one of three different locations, each with their own rules.

What all three locations have in common is that they each start you off with 10 free spins. If you trigger this feature 15 times, you’ll then be able to choose which location to go to yourself.

This location features a multiplier ladder to soften the blow of free spins that don’t win anything. Every time a free spin comes up with nothing, the multiplier increases, making your next win even sweeter. The multiplier starts at 2x and increases by 1 with each consecutive non-winning free spin, up to a maximum of a 7x multiplier. When a spin does win, the multiplier resets back to 2x.

Gyrosphere Valley’s other special feature is that it can only end on a winning spin. This means that if your 10th spin doesn’t win, you’ll continue to use free spins (and increase your multiplier) until a spin wins. As there’s no other way to get additional free spins in this location, this is a great way to extend your bonus round and end it on a high note.

The Creation Lab is where players can find the rolling reels feature. This means that whenever a free spin wins, the winning symbols disappear and new symbols fall from above, opening up opportunities to rack up multiple wins on a single spin.

Another great feature in this location is that the Cryo Wild symbols are held in place during free spins. They don’t disappear as part of the rolling reels feature, and they remain on the reels for either 3 spins, or 3 rolling reels results, further increasing your chances of racking up multiple wins.

Similarly to Gyrosphere Valley, the Amber Scatters don’t appear in Creation Lab, meaning that free spins can’t be reactivated. Luckily, thanks to the rolling reels feature, there are still plenty of opportunities to rack up consecutive wins on your 10 free spins, though.

The Raptor Den is the only location where players can actually end up getting additional free spins above the initial 10 that the bonus feature starts with. This is because the defining feature of this location is something the game calls Wild Scatters.

Three or more Scatters displayed at once grant the player an additional 5 free spins, which combined with the Wild Scatters mean that players are extremely likely to end up with more than the original 10 free spins.

For a game that’s as simple and straightforward as this one is, we were absolutely blown away by how much fun we had during our Jurassic World slot review testing. From the whopping 243 paylines, to the Scatters behaving like Wilds at times, and the phenomenal bonus features, we definitely recommend giving this Jurassic World online slot game a spin, even if you haven’t seen the movie!